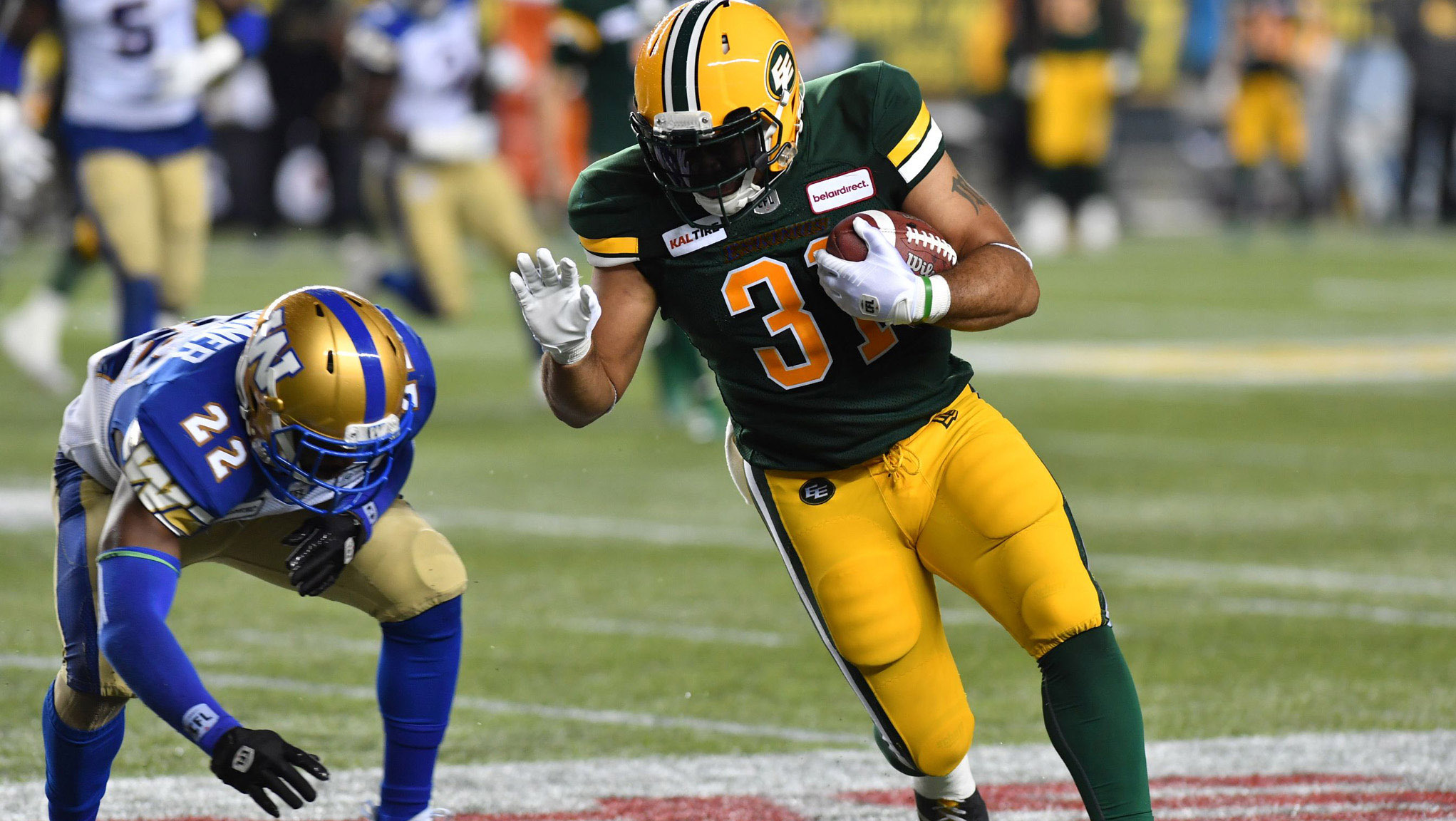 Currently, the picture is about three scrolls down the main page on the Calgary Stampeders’ site.

The journey there is a quick collage of what you’d expect to see: The team huddled at the end of its practice on Monday; clips of the coaching staff being interviewed individually; kickers Rene Paredes and Ronnie Pfeffer.

Then there’s the shot that sore thumbs its way into your vision and refuses to leave. A Green and Gold No. 31, saluting, the way he would after being a part of something great that likely crushes his opponent’s hopes.

It’s been almost two full days and for anyone that’s come to know him in those colours and with that number it still feels almost wrong to say: Calvin McCarty is a Calgary Stampeder.

“He’s always been a thorn in our side,” Stamps head coach Dave Dickenson told Postmedia’s Danny Austin on Monday afternoon.

Dickenson spoke with McCarty ahead of the signing to gauge his interest. It was very much there.

“He definitely wanted to play, just didn’t have an offer that he thought was a legit offer,” the coach said.

“He just wants to play. He wants to be part of a football team that has a chance to do some good things. (We’ve) just got to get him up to speed. I’m not expecting anything more than him being himself. When he gets here, we’ll see how he looks.”

McCarty’s arrival in Calgary was ushered in by an Achilles injury to veteran fullback Charlie Power. The 30-year-old had spent the previous six seasons with the Stamps and as Austin pointed out in his story, is as big a locker room guy as he is an on-the-the-field guy, an ambassador for the Calgary way. In McCarty, who’d announced his retirement in March, Calgary will try to incorporate a player that held the same value in Edmonton’s locker room.

If you think that reads as strange as it might be to actually see McCarty in Stamps gear when he clears quarantine, you’re not wrong. Through 13 years in Edmonton, McCarty became that ambassador-type player for the Elks, seeing them through everything from non-playoff seasons to a Grey Cup win in 2015. He was there through the Ricky Ray trade, the Michael Reilly era and Trevor Harris’ first season in Edmonton in 2019. He’s watched former teammates become coaches and GMs and became one of the faces you’d see the most when the team went into the community. This will be a substantial change for McCarty first, maybe the fans in Edmonton second.

With all of that said, McCarty’s not the first player to make that trip down or up the QEII highway to make that change. J.C. Sherritt hung up his cleats in Edmonton in January 2019 and joined Dickenson’s staff two weeks later as linebackers coach. Terry Vaughn started his CFL career in Calgary (1995 to 1998) before heading to Edmonton (1999 to 2004). He won Grey Cups with each club.

Going further back, Norman Kwong played both sides of the Springfield-Shelbyville rivalry (you can choose who Springfield is) through his legendary career, spending his first three seasons in Calgary before being traded to Edmonton in 1951, where he stayed for nine more years. He also served as president and GM of the Stamps from 1988 to 1991. He even — brace yourselves, Oilers fans — helped bring the Flames to Calgary as a part-owner of the Flames and has his name on the Stanley Cup from their 1989 win.

McCarty had a short video posted on his Instagram story on Sunday night. He was in his car, presumably headed south. He wore a black visor and when he eventually pointed his head down, you saw the Stampeders logo. The first time seeing it is the strangest. It gets a little less jarring each time after.