It’s been more than six months since they last met on the field and their next regular-season on-field meeting is still three-plus months out but on Monday, we got a little taste of an Edmonton-Calgary showdown.

In the dregs of winter, when we’re all expecting spring to arrive faster than it can in Canada, the Elks and Stampeders gave us a ray of that competitive sunshine that’s linked the two teams and the province of Alberta for over a century now. The Elks struck first, announcing their president and CEO for a day initiative, adding another layer to their longstanding relationship with the Winnifred Stewart Association.

The Stamps came back with a gesture of their own a couple of hours later, announcing that they’re helping to revive the Bowness High School Trojans football program. 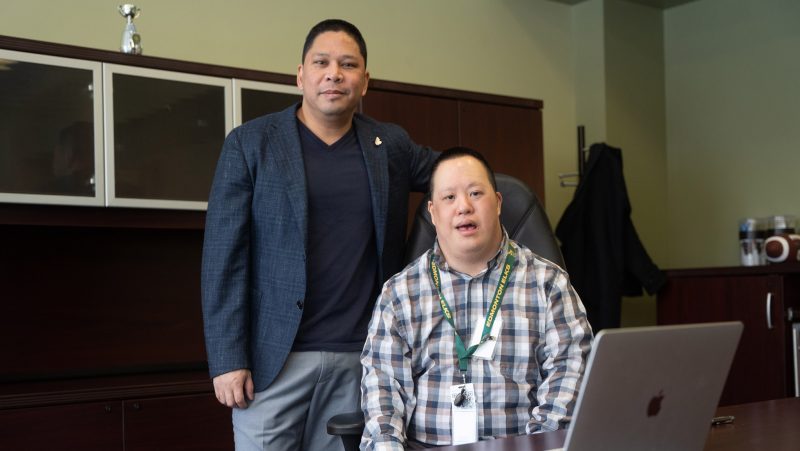 It’s not the fireworks and the big-game feel that you get on Labour Day, or the be-all and end-all tension that comes from an Edmonton-Calgary playoff game; that’s pretty well impossible to create at this time of year. Monday’s dual announcements hammered home another element of that rivalry and why it matters so much to so many people in those cities. As much as fans are invested in their teams, their teams are invested in them and their communities.

In Edmonton, the Elks will work with Winnifred Stewart — an organization that supports individuals with developmental disabilities — to give one person the chance to work alongside new Elks’ president and CEO Victor Cui each month. The initiative echoes the Elks and Edmonton Oilers’ longstanding relationship with Joey Moss, who served as a locker room attendant with both teams  for 35 years until his passing in 2020. Winnifred Stewart strives to find employment for its clients in inclusive, supportive workplaces.

“This program is another great opportunity for our club to highlight how an inclusive workplace can have a positive impact on all of us,” Cui said in the Elks’ statement on Monday. “I’m excited to grow our partnership with Winnifred Stewart, as we work together to make the Elks and all workplaces a more welcoming place.”

“Supporting minor football is super important, and I’m especially excited to give back directly to where I came from.” @RyanSceviour https://t.co/W62Vm4NSwC

In Calgary, the Stamps will donate $10,000 to cover all uniform costs for the Bowness Trojans, which facilitates their return to the Calgary Senior High School Athletic Association for the 2022 season. The school hadn’t played independently since 2012 and had formed a joint team with the Sir Winston Churchill Bulldogs over the last eight seasons.

Stamps’ offensive lineman Ryan Sceviour was a part of that 2012 Trojans team. He’s the only Trojans alumni to play for the Stamps.

“I’m very excited to hear that Bowness is getting their football program back,” Sceviour said in the Stamps’ statement on Monday. “Some of my best memories are playing with the guys on that field. It helped shape and mold me into the player I am today.”

Investments in the community, whether they’re financial like the one the Stamps made, or in people like the one that the Elks have made, always pay off.

Joey Moss is of course irreplaceable, but part of his legacy deserves to be that other developmentally challenged people are afforded the opportunity to show what kind of a difference they can make in peoples’ lives and their community at large. That’s something that Cui and the Elks have picked up on. Their use of their platform no doubt creates a ripple effect for other organizations throughout the city and province.

Just like Sceviour made his journey from Bowness to the University of Calgary and eventually to the Stampeders, the door is re-opened at his alma mater for other players to make their own journeys. While there are very few that play beyond high school, let alone university, the impact that team sports has on kids creates a positive ripple of its own.

There’s a lot of history and passion that goes into the Edmonton-Calgary rivalry. On Monday, both teams tapped into the foundation of that fan investment.