After what would amount to years’ worth of nights of having Joey Moss stay with his family, Dwayne Mandrusiak came to know his friend’s habits very well.

The Edmonton football team’s equipment manager for 49 years, Mandrusiak was introduced to Moss in 1986 through Wayne Gretzky. The Great One had set up his friend with Down syndrome with a job in the Oilers’ locker room Gretzky asked Mandrusiak if Moss could spend his summers with the football team. It became a permanent gig and that led to Moss spending a lot of summer nights at the Mandrusiak home, where Moss became close friends with the family, including their two sons.

You could hear the heartbreak and exhaustion in Mandrusiak’s voice on Tuesday, almost a full day since he’d found out that Moss had passed away at 57.

“I lost a son,” Mandrusiak said.

Edmonton’s outpouring of emotion for one of its favourite people has spilled nationwide. Moss had been battling Alzheimer’s the last few years and over the summer broke his hip. He spent his final days at the Royal Alexandra hospital in Edmonton, with limited in-person visitation because of the pandemic.

Mandrusiak remembered in those summers with Moss, how after a long day they’d have a cold beer, sit in the hot tub and talk about watching some James Bond movies, one of Moss’ favourites. Almost every time, Mandrusiak said, he’d go by Moss’ room to get him to watch the movie and he’d be sound asleep.

“I used to tell my wife that Joey sleeps the sleep of the innocent,” Mandrusiak said.

“He doesn’t go to bed with all this stuff on his mind like I do. Worried about who’s going to do what at training camp.”

There was an honesty to Moss, an innocence that he brought to life and the people around him. Mandrusiak knew Moss for 34 years and chatted with CFL.ca about that time and his best memories of someone that he considers family.

RELATED
» O’Leary: Joey Moss was the heartbeat of a generation of Edmonton sports
» CFL community mourns the passing of Joey Moss
» Lions and the CFL mourn the passing of David Braley

Chris O’Leary: What made your relationship with Joey work?

Dwayne Mandrusiak: It was great because we hit it off, I joke with my wife, ‘I think I got along better with Joe than with you.’ It was a perfect match. Wayne was, and I’ve said it 1,000 times, I’m so blessed that Wayne had the confidence in me to take care of Joe. My family, I mean, Joe lived with us for most of the summer, well through camp and everything until he went back to the Oilers (every fall). He taught my family so much about patience and hard work and inclusion. Everything that my boys are now, which I find my boys to be incredible, most of it was taught by Joe. We encouraged it but you know, they’ve watched Joe and like my son, Matt said he wasn’t (someone with) Down syndrome to us, he was our brother.

CO: Were you able to do anything Monday night in terms of seeing people to process the news?

DM: Well, Spark (Lyle ‘Sparky’ Kulchisky, the Oilers’ former equipment manager) and I went and saw him on Sunday. We were grateful that the family wanted us to go see him. He was at the Royal Alec downtown.

Spark and I met at 11:30 and went up there and got gowned up and masked up and gloved up and went in. We only spent 10 minutes there because with Covid you could only have two visitors and Joey’s sister and her husband were up from Calgary, so they stepped out of the room.

We went in and talked to him. He was so frail and tiny looking, but he was fighting, buddy, I’ll tell you what. We said, you know, I knew you’d fight and it was good to talk to him. He squeezed our hands.

We told him to go see his mom and his aunts and his brothers. Sparky said, ‘There’s lots of cold, cold beer up there, go get it.’ So we had a laugh at that.

(Monday) morning I called Spark and asked if he’d heard anything. He called (Joey’s mom) Pattie and she said he had a tough night and they upped his medication and he passed away at about 3:30. I was expecting that you know, just from seeing him. It was a sad day for us but it was amazing to listen to the outpouring from the people. I mean, he really affected a lot of people.

CO: You had a front row seat to the Joey show in a lot of ways over these years. What was it like to watch him have the life that he did with both teams?

DM: His family always thanked me for everything I did for Joe and I said, ‘What I’ve done for Joe is half of what he’s done for me.’ I mean, he was amazing, to watch his work ethic.

I’d go to drive him home and go back in the locker room and he’d be picking up sock lint with his fingers that the vacuum missed. I thought, ‘I’ve gotta pick my game up here, this guy’s good.’

We used to joke that he outkicked his coverage, as far as his life went. I think between the two organizations we did a great job. I would call Spark and he’d call me and we’d talk about how we were dealing with Joe. We’d tell him we wanted him to do a task and we’d let him figure out how to get it done, instead of telling him all the time, we’d let him work on things mentally. If he didn’t get it we’d help him but he was amazing. He did everything to the max.

He was such a great guy in the locker room. We’d have a dance contest — and he won them, they didn’t give it to him. He could dance and he was always the best show at the rookie show. He’d do the impersonations of wrestlers. He had The Rock, do you smell what The Rock is cooking? And then he’d turn with his eyebrow. He’d do Stone Cold Steve Austin, he’d open two beers and pour them over his head. He always loved the spotlight and he was good at what he did.

He’d get up without an alarm. He’d be up and showered and ready to go. He did so many cool things. He’d come home and play stick hockey with my kids in the basement for an hour, you know? Anything that they would do.

We played a game called red ass. So Joe was there and it’s the trainers and equipment staff and we’re playing and Jason Maas comes in, this is when he was a player. He asks what we’re doing and now he wants to play. And you know, Jay, he’s really driven. And he starts playing and Joe loses it, like he drops the ball and he’s got to go against the wall. And Maas fires it and hits Joe in the ear and Joe drops to his knees. We’re like, ‘Oh my God,’ and Joe gets up, goes, ‘Owww,’ and comes back. Jason dropped one on purpose and Joe fired one at him. We treated Joe like we treated everybody else. We weren’t gonna treat him special because I mean he’s special as it is, but we’re gonna treat him like us and that’s because we want him to be like us.

So if he was pissing me off I gave him sh*t. But he very rarely did that. He was always so easy to work with. There were days that I was having a bad day and he’d come over and start to massage my neck and ask if I was OK. And I say yeah, I’m OK. He’d say, ‘Good, I’m worried.’ And you knew it was sincere. It was a great time for me to meet him.

Joe lived in “Joey’s Home” which is a block-long group of apartments. He had Wayne set it up for him. His room looks like a kid’s bedroom and behind that there’s a massive living room, a sectional couch, a 60-inch TV, a massive beer fridge and table and chairs and then a whole wall of pictures of Joe with celebrities. There was one letter there and I went over to it, I started reading it and it said, Joe, get well soon. Your friend Paul McCartney.

I asked him how he got that and typical Joe reply he said, ‘I don’t know, I don’t know Dwayne.’ I called his brother and he’d been at a golf tournament in Brantford with Wayne. This was when Wayne was dating Joey’s sister, Vikki. The Moss family used to be like the Partridge Family, they’d travel on a bus and play all these gigs. Wayne brought them in as entertainment.

Joe got sick and they had to rush him to the hospital. David Foster was there and the next day he flew to London and saw Paul McCartney. He told him about what had happened and that Joe had Down syndrome. So McCartney wrote the note and said, can you get that letter to him?

We called him the ordinary superstar. It never ceases to amaze you because he never changed. From Day 1 to the last day he worked for me, it was the same guy. 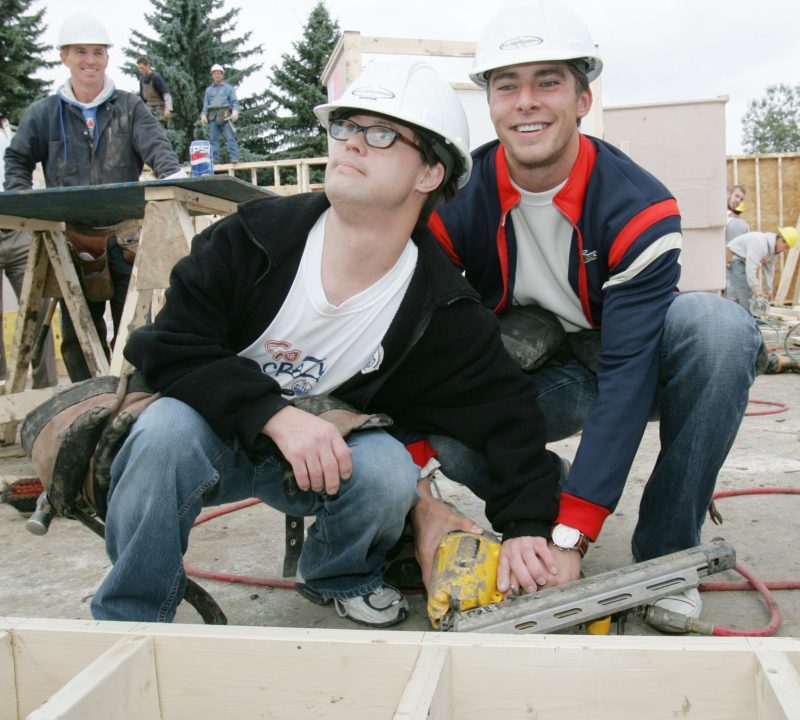 Over time, Moss became a public figure in Edmonton and was requested to make appearances, like at this 2006 charity event (Photo supplied)

CO: What impact do you think he’s had in terms of visibility for people with special needs?

DM: I think he opened the door for a lot of organizations to take a chance on people with a disability. More teams in the CFL are bringing in Down syndrome workers. In Toronto they had Dave The Wave that worked with them, he worked with Danny (Webb). Dave would see me all the time and ask if Joey was with me. Dylan in Hamilton, they’d all ask about Joe. ‘Tell Joe I said hi.’ He was their king, he was the guy they all looked up to.

We were in Wayne Gretzky’s fantasy camp one year, there’s a young kid in Detroit that had a Make a Wish. He wanted to have Joe Moss sit in a private suite with him and watch the Detroit Red Wings play the Edmonton Oilers.

Wayne called Steve Moss, who was Joey’s guardian at the time and unfortunately, Steve passed away last year, Wayne said he’d make arrangements for them to come to the fantasy camp. Steve told him they couldn’t make it, they had to go to Detroit for this thing.

Wayne flew them on a private jet to Detroit then brought him to the fantasy camp.

Joe just had that effect on people. Even our guys who knew Joey, it’s amazing for me to see it. When players are getting their picture taken with a kid who pulls towels all day, that’s pretty special.

CO: There’s been talk of naming the Oilers’ practice rink after Joey and some talk of a statue. What would you like to see in terms of a tribute to him, so that his memory lives on in Edmonton?

DM: What I’d really love to see is a statue of Joey next to Wayne.

Wayne started this whole deal. The last fantasy camp that Wayne had, he knew it was coming to an end because Joey was physically tired and then having some issues. He spent the whole week with Joe. He knew Joe was not going to be able to make these much more. They had such a strong bond. It was amazing to watch him and I give Wayne all the credit. That was his boy, I mean, he loved Joe.