On Tuesday, Twitter provided a reminder of an iconic CFL performance. It’s now been 26 years since Matt Dunigan set the CFL record for passing yards in a game, with 713.

July 14th will be the 25th anniversary of when @MattDuniganTSN threw for 713 yards!

The game wasn’t televised so only a select few can tell the story of this incredible performance. This is Matt Dunigan’s masterpiece: https://t.co/AsJ9AagjUM pic.twitter.com/LCdrNBsBS2

I wasn’t at the Winnipeg Blue Bombers home-opener in 1994 and the game wasn’t televised. And while no one has come close to Dunnigan’s astronomical totals since that game, it did get me thinking about what might be the best quarterback performances I’ve seen in my time around this league. It didn’t take long to get my No. 1 candidate. 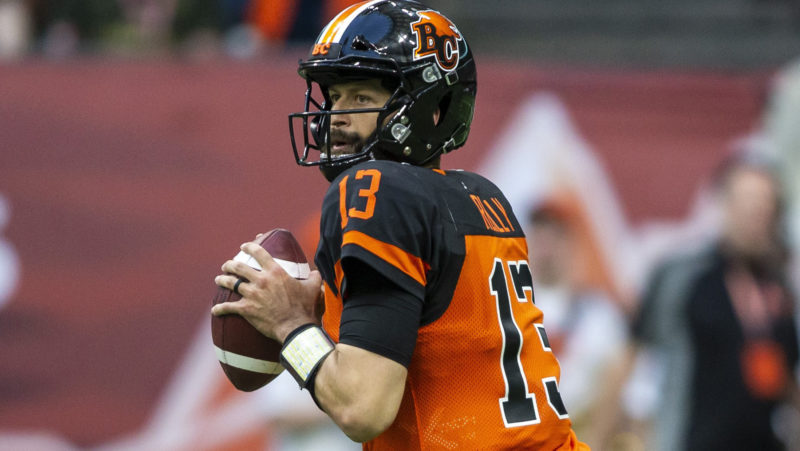 In just his seventh start with Edmonton, Mike Reilly broke the 500-yard passing mark in a 2013 game in Toronto (Photo: The Canadian Press)

Mike Reilly didn’t enjoy much about his first season in Edmonton, but in just his seventh start with the team, he battled one of the game’s greats in Ricky Ray. Playing under an open roof at Rogers Centre on Aug. 18, 2013, Toronto came out on top, 36-33 but the QB stats were the story in this game.

Reilly went off in a losing effort, connecting on 36 of 45 passes for 511 yards and three touchdowns. Ray, who launched a one-day HOF career in Edmonton and had been traded to Toronto after the 2011 season, responded with a 30 of 35 passing night with 413 yards and three touchdowns of his own. Ray also tied a team record that night, making 17 straight completions in the first half.

The two QBs combined for 924 yards, six TDs and zero interceptions. For good measure, Zach Collaros got in the game for Toronto and threw one pass: A 45-yard bomb that found OL Zander Robinson in the end zone.

The game was a stat-stuffer for a lot of offensive players. Fred Stamps had 172 receiving yards for Edmonton, with Marcus Henry adding 96 and Nate Coehoorn getting 92. John Chiles had 135 receiving yards for Toronto, with Chad Owens hitting 102 and Andre Drurie adding 74.

I don’t know that Dunigan’s 713-yard game will ever be topped. As Ed Tait of bluebombers.com says in TSN’s video linked above, that July night felt like any other one. There was no indication that Dunigan was going to have the night that he did. A lot of things have to come together for just a win, let alone a history-making performance like that.

I look at the roster of starting QBs in the CFL now and wonder just how much offence we could see from one of them in the right setting. Seven hundred yards feels daunting, like all of the stars in a football-centric sky would have to align for it to happen. We’ve all seen quarterbacks struggle to put 700 yards together over a three-game stretch. To do it in one game? It would take something very close to perfection.

That said, it feels like there are a handful of current QBs that could in that perfect situation at least take a run at the number. Just about every starting QB in the league last year had a game around the 430-yard mark. Granted you’re still several big plays and a lot of yardage away from getting into Dunigan territory from there, but it’s possible.

Dunigan’s record is safe — it hasn’t been close to touched in this new century — but once you get on the field, anything can happen.