Sometimes growth comes through struggle. In his sophomore season at Syracuse this year, Geoff Cantin-Arku learned that firsthand.

The six-foot-four, 228-pound linebacker was a part of the Orange’s disappointing 1-8 season. Through that pain came the Quebec City native’s breakout season. He had 63 tackles, four sacks, a pair of forced fumbles and a fumble recovery, just a year after playing a special teams role as a freshman.

“I think this year I came into the program as one of the oldest guys in the room,” Cantin-Arku, 22, told reporters in a recent Zoom call. 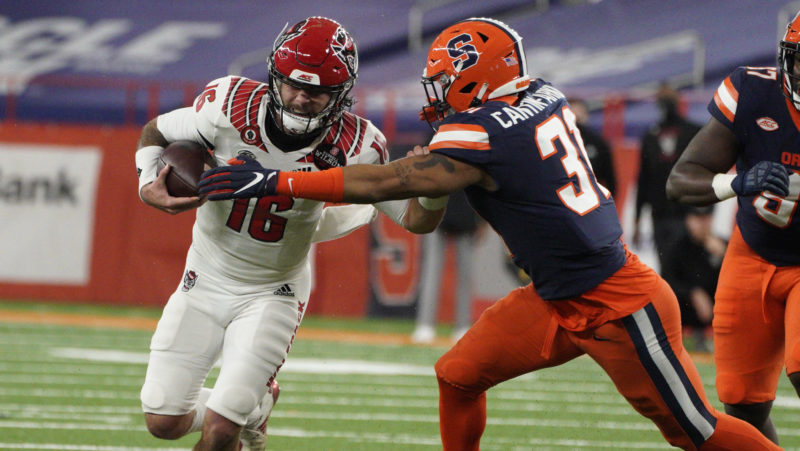 After a sophomore year spent on special teams, Geoff Cantin-Arku got to show what he could do for the Orange in his sophomore year playing linebacker (Photo courtesy of Syracuse University)

“They had a lot of expectations toward me and I think I did really good for my first year playing in the U.S. as a starter. I came from a program where we were playing 12 players on the field and the field was way wider, way bigger.

“I think I did adapt to the style of play and I think what I did (best) was I really progressed in the season. I started somewhere but every game I was getting better, I was making more plays. I had a couple forced fumbles, sacks. I had a scoop and score for a touchdown.

“I think all of my coaches were happy about my year and they’re happy to have me back for next year.”

His freshman year was certainly one of adjusting. As Cantin-Arku said, he grew up in Quebec playing three-down football. On a smaller field, the game was faster and by the time he got into the rhythm of his sophomore year, things were starting to slow down for him. He also grew up with French as his first language, so there was adjusting to do both on the field and off of it in his first year at school.

He leaned on a surprisingly strong contingent of Canadian players — there were seven total on the Orange’s 2020 roster — to get through those challenges. Cantin-Arku bonded with receiver Kevin Mitall, in particular.

“It was really helpful because we really liked helping each other. At the end of the day, we’re both Canadian and we’re family to each other,” he said.

“We really helped each other get better on and off the field. It was something great to have other Canadians on my team.”

In his team’s journey through this frustrating season, Cantin-Arku got to see some of the top teams in college football as they tried to trace their path to a championship this year. There are lessons to take away from meeting the Notre Dames and Clemsons of the football world, while he knows that he can spend the winter months making himself better.

“I think I need to stay focused during the game,” he said.

“I can’t let my emotions…I’m a really emotional guy and I think sometimes I would be better if I would keep my calm and keep playing.”

Cantin-Arku has the blessing of time in front of him. His team can improve and he can too, while continuing to get stronger and thinking about a post-collegiate football career. His NFL dream is what brought him to Syracuse, going to a big-time Div. I program, feeling like he’s a step away from the ultimate level of pro football.

“The NFL has always been my dream, since I was a young kid,” he said.

“I feel like I’ve been working for this my whole life. So I’m going to keep with that and hopefully it’ll work out for me.”