As spring inched toward summer, Mike Reilly had decided he’d had his fill of the outside world.

It was the early days of the pandemic and its threat to the 2020 CFL season was obvious. Every time the BC Lions’ quarterback would open his phone, every time he’d see the news, he was being inundated with negativity. It’s an overwhelming feeling that has likely washed over many of us over the last nine-plus months.

Reilly also knew that a contractual issue with the Lions would be making news soon. He filed a grievance with the team over an unpaid portion of his contract and sensed the negativity that it might drum up in the online world. A face-of-the-franchise type since he’d signed with Edmonton in 2013, Reilly kept a low profile. He didn’t do much, if any media and he deleted his Twitter account.

On Thursday, the Lions announced that they’d reached a settlement with Reilly and that he’d signed a new contract with the team. With the business side of things taken care of, he was back in front of a camera, hopeful this news would put the negative to bed.

“I actually got off of (social media) long before any of this happened,” Reilly told reporters on a Zoom call.

Reilly was doing yard work with his wife, Emily when he made the decision.

“(I thought) there’s just a lot of potential negative stuff that’s going to happen with the season maybe getting cancelled, all that kind of stuff. I don’t like to allow people into my headspace. I want to be able to form my own opinions of whether or not I’m going to have a good day based on my experiences, not on something that I read. somebody typing on the internet.

“During the football season, it’s much easier for me and other athletes because we’re so busy with work that we don’t have time for anything else. But I found myself from really the months of March moving on, just all-consumed with reading the news. CFL news, of course, but also stuff about the pandemic about Coronavirus and all this different stuff. It was a bombardment of negative information and stuff that just made you really not feel great about the situation that the world in general was in.

“At that moment, I chose to just put all that stuff on the back burner and just enjoy what was happening to me on a daily basis, which was me spending time with my wife and kids.” 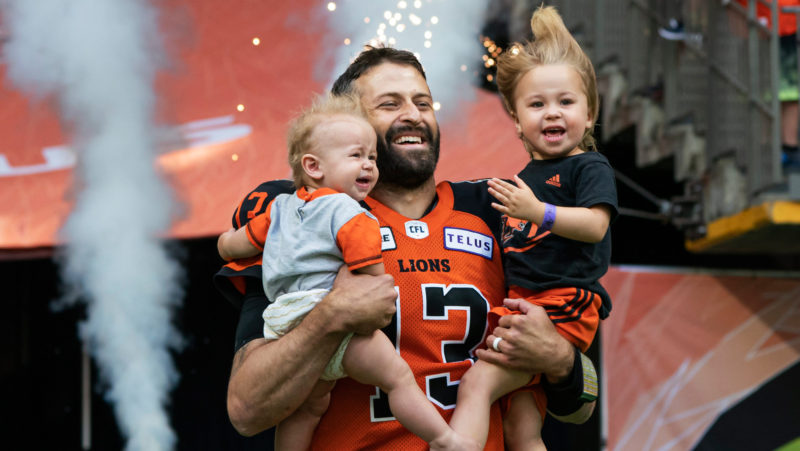 Reilly has balanced the disappointment of the cancellation of the 2020 season with that extra time with his wife and two young daughters. He’s finished a big renovation of the family home in Seattle and has committed to some extensive training for the 2021 campaign. A quarterback that’s never shied away from contact, whether it’s pushing for extra yards on a rush or enduring huge hits while trying to make a play with the ball, this time away from the game has been great for him, health-wise.

“I don’t ever feel like this in December,” Reilly said with a laugh.

“I’m usually not working out in December, not because I don’t want to, but because I physically can’t. This year it’s a very strange thing. It takes me back to when I was early in my career…before I became a full-time starter and how I was able to utilize those off-seasons and really start right away in December and get a full six months.”

Reilly was last on the field on Oct. 12, 2019, when he broke his wrist playing against Edmonton. He had surgery three days later and while he would have been cleared to take part in a normal 2020 season, the extra time off has been a big bonus for him physically.

“It’s going to be 18 months, but this will be obviously the most healthy that I’ve been coming into a season in eight years,” Reilly, 35, said, adding that this has been the most lifting and throwing he’s done in an off-season. He’s excited that he essentially has six more months to build on that training.

“That’s been one of the few blessings in disguise,” he said.

He’ll balance the training with that bonus time with his wife, Emily and their two daughters, four-year-old Brooklyn and two-year-old Cadence. There have been birthday celebrations and swimming lessons and a lot of the day-to-day things that he would have missed out on in a normal year.

“I’m healthy and more than anything I’m hungry, probably hungrier than I’ve ever been to get back and play,” he said.

He’ll get back to a Lions team that has undergone some considerable change. GM Ed Hervey left the team on Oct. 16 citing personal reasons and team owner David Braley passed away on Oct. 26. Reilly deferred questions of Hervey’s departure being linked to the grievance he filed, saying that his agent handles the business side of his football career.

The two have a deep connection. Hervey brought Reilly to Edmonton in 2013 and was one of the main draws in getting Reilly back to BC as a free agent in 2018.

“Ed means a ton to me personally, not just football-wise. Whatever he does with the time that he has I hope he’s healthy and he’s able to enjoy whatever it is he’s going to be focused on,” Reilly said.

Lions coach Rick Campbell has added co-GM to his title, as has Neil McEvoy, whom Reilly has known since his first stint with the Lions in 2010. Free agency will undoubtedly tweak the roster and when the Lions finally get together, they’ll have a lot to prove after a disappointing 5-13 season.

“Six months of sitting on that feels like forever, but 18 months is almost unbearable. So we’ve got to go out and make amends for that, for sure.”