OK, there is no doubt that at the beginning of September, Rider fans and Bomber fans actually missed each other.

The annual pilgrimage from Manitoba to Saskatchewan on Mark’s Labour Day Weekend and vice versa the next weekend has been put on hold for the year.

And it hit me over the last two weeks what we’ve been missing: the camaraderie among the passionate fan bases on the prairies.

The feeling in Regina around Labour Day Weekend is something you have to experience for yourself. It’s hard to describe.

There is a mini-Grey Cup festival feel with bars setting up extra outdoor spaces and bringing in bands. The pubs are full of green and gold and white and blue. The trash talk is there but all in good fun.

Even the media brigade that I happen to be a part of takes time out of their ‘pre-game preparation’ to enjoy the Saturday night before a game. It’s usually a group of local scribes and reporters along side our colleagues from Winnipeg. We talk football, life, industry and also run into a lot of fans we know and interact with during the season on social media.

Oh, yeah, and there just so happens to be a game the next day.

A similar event goes on the next weekend in Winnipeg. The trash talk carries over from the previous week.

This year in particular would have been an interesting as for the first time since 1990, Bomber fans would have come in with a little more swagger after winning the Grey Cup.

Rider fans would chant ‘1990’ at a throng of Bomber fans. However, thanks to Zach Collaros and Andrew Harris and Willie Jefferson and 41 other players on the field in Calgary last November, the chant would have died and Rider fans would have to find some new material.

Of course swagger is nothing new to the rivalry.

Swagger was big chatter in 2011 when the Bombers, led by Odell Willis (aka self labelled mayor of Swaggerville) brought in the 7-1 Bombers against the 1-7 Saskatchewan Roughriders who had just fired their coach Greg Marshall to replace him with Marshall’s predecessor Ken Miller.

Let’s just say it is one of Rider Nations favourite Labour Day game ever when Miller led the Riders to not only a win in the Labour Day Classic but also completed the sweep of the series in Winnipeg the next week.

The following season it was the Bombers turn to change coaches ahead of the game as they fired Paul LaPolice and promoted Tim Burke to take over the two win team. Saskatchewan wasn’t that hot either with new head coach Corey Chamblin in his rookie season with a 3-5 record.

You wouldn’t have known it by the 52-0 result – another all-time favourite among Rider fans. The result led to General Manager Joe Mack storming into the Bomber locker room and absolutely tearing into the team with his new head coach Tim Burke as a bystander.

Now that’s not to say the Bombers haven’t experienced any joy through the years. Let’s not forget who won the final Labour Day Classic at the old Taylor Field in 2016. In an all-time classic, the Riders tied the game with a minute left when Kendial Lawrence took a punt return 85-yards. 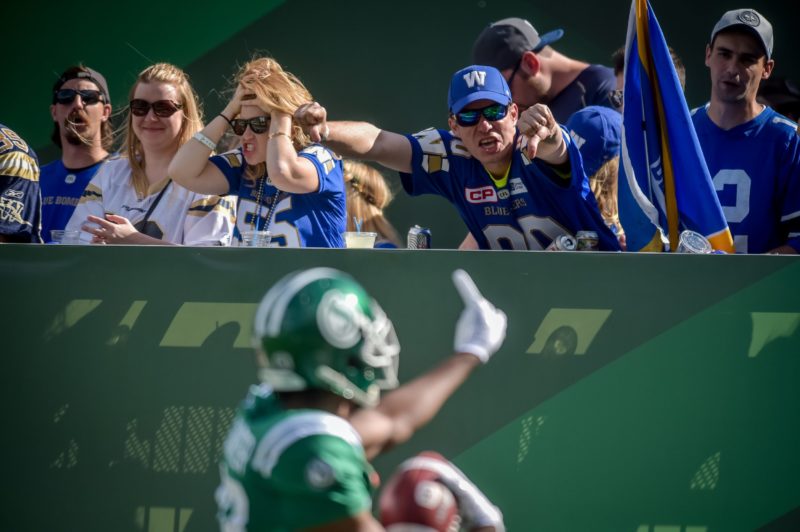 Duron Carter celebrates in front of Bombers fans during a game in 2017 (Matt Smith/CFL.ca)

The game ended in controversy when Justin Cox was called for pass interference after intercepting Matt Nichols, setting up the chance for Justin Medlock to hit a 43-yard game winner.

25-22 the final goes in the history books as the final Labour Day Classic at Taylor Field.

It wasn’t the first game winning field goal nor the last in the rivalry. Brett Lauther‘s walk off field goal last year is highly regarded in Saskatchewan.

We actually did a Labour Day bracket on my radio show, The Green Zone, in Saskatchewan and Lauther’s walk off that had the team celebrate in ‘Pil Country’ in the end zone with the fans ended up in the final against 2007.

The latter, the winner, was Kerry Joseph running his way into the end zone at the end of the game on a QB draw play that sent Taylor Field into a frenzy and left Bomber fans the brunt of that evenings chirping during post-game events.

While the Riders have won 14 of the last 15 Labour Day Classic games, the Bombers have seen success in the rematch, affectionately referred to as the Banjo Bowl thanks to Troy Westwood’s description of Rider fans back nearly 20-years ago.

The Bombers have won five of the last seven, including last year’s dominant 35-10, which might be referenced as the Johnny Augustine game. The replacement back for the suspended Andrew Harris had 138 total yards, including a 58-yard touchdown reception.

Of course this rivalry has carried over into the playoffs, with the Bombers winning the Western Final in 2019 at Mosaic Stadium in Regina with the quarterback the Riders started the 2019 season with, Zach Collaros.

So most definitely the Bombers fans would have come in with the bragging rights and maybe a 2013 chant of their own toward Rider fans.

Next year, the fan bases likely won’t want to say openly they missed each other. And that’s okay, as long as we’re all together in Regina, Saturday September 4th for the pre-game ‘festivities’.