Grab a turkey leg, a slice of pumpkin pie and watch football.

That’s what the tradition should be every Thanksgiving in October in this country.

Over the last couple of seasons, it’s been more of scheduling quirk than a thought out commitment to a tradition for the Canadian Football League.

So let’s think about what things this league can do a better job of when it returns.

Thanksgiving is one of those things.

Scheduling conflicts at McGill University almost annually guarantee that Montreal will host a game on Thanksgiving.

The problem I have is that we get a double header one year and a single game the next and in 2019, the league didn’t have a game on Thanksgiving Monday at all.

This should be a weekend of food, family and football. 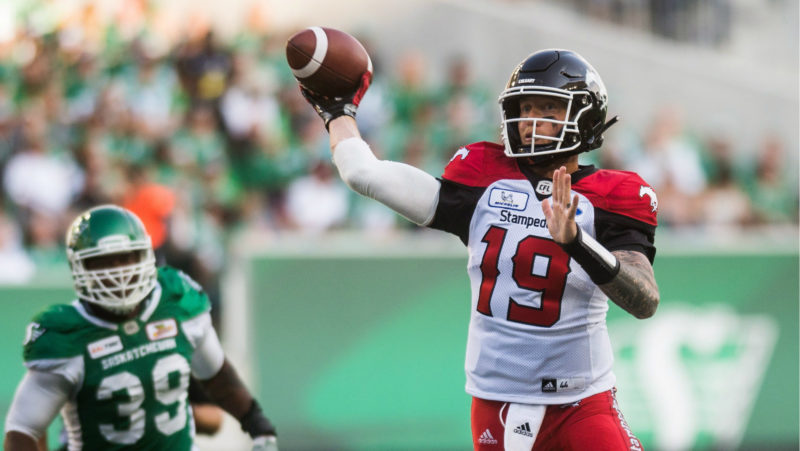 A Stamps-Riders Thanksgiving game would whet the appetites of many football fans on the prairies, Jamie Nye suggests (Matt Smith/THE CANADIAN PRESS)

This should be a no doubter double header AT LEAST for the CFL.

Canada Day, Labour Day and Thanksgiving should be all be non-negotiable football days, in my opinion.

The second Monday in October is a month before the playoffs and gives a great feeling for what will be a great run to the post-season.

The CFL needs to capitalize on that with a captive audience.

Labour Day should show us all that making these types of games bigger than your regular summer or fall Friday or Saturday game can pay off.

For this to work, the league has to settle on what type of tradition it wants.

You can’t have the matchups be sporadic. There should be an expectation of the teams that play. We know what we get on Labour Day Weekend. It’s the same games in the same cities, every single season.

Thanksgiving should be no different.

Here are my potential annual games for a double header on Thanksgiving.

Over the last 10-plus years, this rivalry has been fantastic. Many in Saskatchewan now believe the Stampeders, not the Bombers, are the biggest rivalry for the Roughriders. Of course it heated up because of Henry Burris but it’s carried over with the big games these teams have played in the playoffs in 2006, 2007, 2009, 2010, 2012 and 2013.

Though they haven’t played in the post season in a while, there is still plenty of passion between these two teams. Wouldn’t you be shocked to find out Rider fans aren’t too enamored with Bo Levi Mitchell?

Hear me out. I know. This isn’t a division rivalry at ALL. Why would you put it on Thanksgiving?

Can we have a little retro fun on Thanksgiving each year with the Roughriders vs. the Rough Riders? I’d love to see a throw back game with what used to be known as the ‘green Riders’ against the ‘eastern Riders’.

Put that big white ‘R’ on the helmet for Ottawa with the throwback jerseys and pay homage to Ron Lancaster, George Reed, Russ Jackson, Tony Gabriel etc. on a national holiday.

The Grey Cup rematch games have always landed on a random date and with teams having to play each other twice, sure there would likely have been a rematch already earlier in the season.

But it’s a thought to highlight some bad blood from the championship game the year previous. Setting up the ability to set up the run to the Grey Cup.

We’ve seen some years recently move away from the Labour Day rematch the week following in Toronto so how about moving the rematch to another long weekend Monday up the QEW?

It would allow the great rivalry to fire up the fans for a new tradition.

As I mentioned, it’s become almost automatic that Montreal hosts a game on Thanksgiving so you could continue this tradition with anybody.

I’d be interested to know how the fan base in Montreal enjoys having the Thanksgiving game. Has the organization capitalized on the annual festivities to make it feel like an event? Have Alouette fans even noticed?

What’s an annual Thanksgiving matchup you would like to see?