The first week of October, 2013 wasn’t a normal morning for this observer and commenter of the Saskatchewan Roughriders.

We were going to practice to talk to the face of the franchise about calling a fan on twitter a ‘dumb ****’.

It was the tweet that in some small way, turned the season for the Saskatchewan Roughriders, because it was indicative that the team was the right amount of pissed off to turn things around.

The season seemed to be spiralling out of control. The Riders were hosting the Grey Cup and in the first half of the season were flying along with an 8-1 record.

Then their confidence, their chemistry and what seemed like destiny flew out the window. 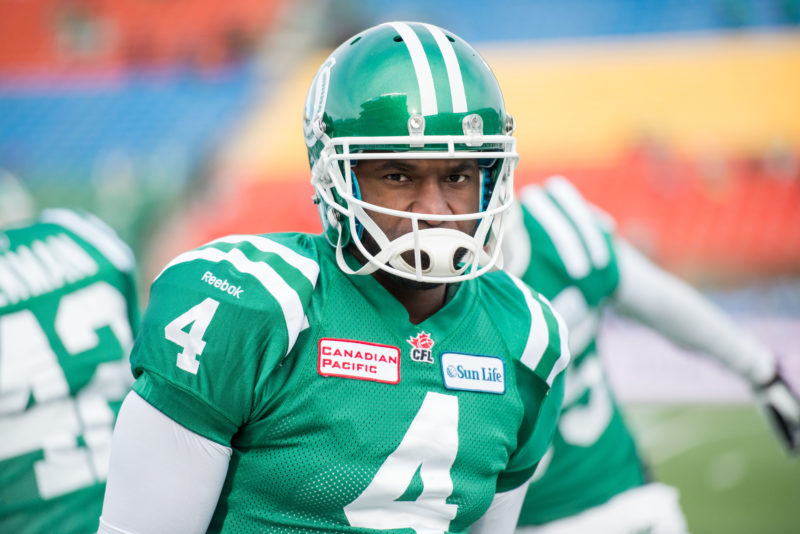 Darian Durant helped lead the Riders to a Grey Cup at home in 2013 (CFL.ca)

The week before the second loss of the season, the Regina Police Service made public that three members of the team were being investigated for an assault outside a Regina nightclub a month earlier.

The scandal ripped through the community. I remember it well because the media was vilified for covering the story. Yes, fans were beside themselves that we’d actually cover a story that could impact the team’s performance.

They were hosting the Grey Cup after all.

Some wanted the players suspended. Others wanted to see them get their fair day in court. The players, Taj Smith, Dwight Anderson and Eron Riley, played on.

The team though, started losing.

Let the record show, the charges to Anderson and Riley were dropped, while Smith’s charges were stayed several months later.

One loss, became two, star running back Kory Sheets then got injured. The losing streak stretched to three and it all came to a boiling over point after the Riders went to Montreal and played the 4-8 Alouettes, led by quarterback Josh Neiswander.

If there was a game to end the losing streak, surely the Riders (8-4 at the time) could beat the Als, who were without Anthony Calvillo following his career ending injury over a month earlier.

17-12 was the final. Darian Durant threw three interceptions. And a certain fan wanted to weigh in on the state of the team to the quarterback himself on twitter. A quarterback he clearly adored because the twitter user Christian had a picture of he and Durant as his profile shot.

The advice was simple, “@dariandurant key to success … Get your (butt) out of the pocket. You ain’t A.C.!!! Like at the beginning of the season.”

Durant showed where the frustration level was for franchise quarterback. The usually well mannered, serious, professional, captain of the team, put the fan in his place.

“Wasn’t running at the beginning of the season dumb **** #armchair,”

FACT CHECK: Durant played in seven of the team’s eight wins and in those victories ran for a total of 13 carries. A tick less than two carries per game. Point, Durant.

On the first day Durant spoke to reporters after the tweet, he showed the poise he did 99% of the time he was in Saskatchewan. There were 12 questions on the tweet alone from why he lost his temper to what it was like in the fishbowl, to how quickly he deleted the tweet.

He answered them all professionally, with a smirk, and said all the right things.

But anybody standing to watch and listen, including myself could see and hear the fire was burning hotter than ever.

From that point on, he proved it.

The Riders went to BC Place and wiped the floor of the Lions on their way to a turn around three game winning streak that helped get their swagger back.

The win helped solidify home field in the Western Semi-Final, when ironically, it was Darian Durant‘s nearly 97-yards rushing that helped carry the Roughriders into the Western Final.

But that post-season, Durant was a man possessed. Eight touchdown passes and no interceptions in three games.

He delivered the Grey Cup at home and gave Saskatchewan and their fans the biggest thrill of their lives, including Christian.