If the Roughriders/Stampeders rivalry were a boxing match, the Riders had the Stamps against the ropes in the race for second in the West Division. Heck, they had them on the mat.

The ref was over top of them yelling ONE … TWO … THREE … FOUR … and then the Stamps slowly got to their feet, were assessed and allowed to keep fighting.

Calgary’s bye week was like being saved by the bell. They went to their corner, spit, got the blood cleaned up, the cut closed and waited for the bell to call them back into the fight.

What happened next put the Riders on their heels; a 14-0 lead early for the Stampeders that Saskatchewan couldn’t recover from. Then in the next round, it was a 71-yard TD bomb and Ka’Deem Carey running his way to domination that had the Roughriders begging for the bell.

RELATED
» CFL Simulation: Stamps on the rise
» Power Rankings: Where did Calgary and Saskatchewan land?
» Buy Tickets: Roughriders at Stampeders

The bell rang and the Stampeders are not only in the fight but have taken control of the battle for second in the West. They hold the tie breaker and hold home field advantage in a crucial round on Saturday night. The game feels like a main event with a few undercards with the REDBLACKS and Hamilton and then BC in Winnipeg before the Stamps and Roughriders battle at McMahon Stadium.

The Roughriders have had a week to reassess things, much like the Stampeders did. But for the Roughriders to find their game again and put the Stamps back on the ropes and take control of this fight, they need to find something in their game that is the equivalent of a knockout blow.

The Roughriders starting quarterback became the face of the franchise with his fearless, lay-it-all-on-the-line play.

Fajardo at times has shown that fearlessness and leadership but it’s clear, and he’s even admitted as much, that he’s either overthinking it or has lost some confidence in a few aspects of the game.

He’s getting hit in the pocket a lot more and he’s dealing with a new crop of receivers who are learning on the fly about this Jason Maas offence and adjusting to a pro game, or a new game, at the same time.

Fajardo’s numbers this season compared to 2019 are becoming a stark contrast. He’s only had one 300-yard passing game and the next highest so far this year was 279 yards.

How many games did he throw for over 279 yards last season? Six. And they were all over 300 yards. He even had two 400-yard passing games. His highest so far this season in 321.

In the final five weeks of the season, Fajardo needs to take over games again. He’s shown flashes, like the comeback in BC where it appeared nothing was going to stop him from winning the football game but outside of that, he’s … dare I say it … suffered a bit of a sophomore slump in his second season as a starting quarterback.

Of course, it’s not all at the feet of Fajardo.

As mentioned, he’s been hit a lot and when the quarterback starts getting too much pressure on a consistent basis, many quarterbacks have told me how the mental timer goes off a lot quicker to get rid of the ball or start scrambling. Whereas, when the offensive line is playing well, it feels like you have all day to throw the ball and you barely think about being hit.

He has also been dealing with four starting receivers who have limited or zero experience in the CFL before this season.

While Brendon LaBatte, Dakoda Shepley and Philip Blake aren’t returning the offensive line this season, at least Fajardo will get Shaq Evans back in the lineup.

Oh, and Duke Williams is also cleared through the COVID protocols and is gearing up for his first game in Rider green since his return to the CFL from the NFL. 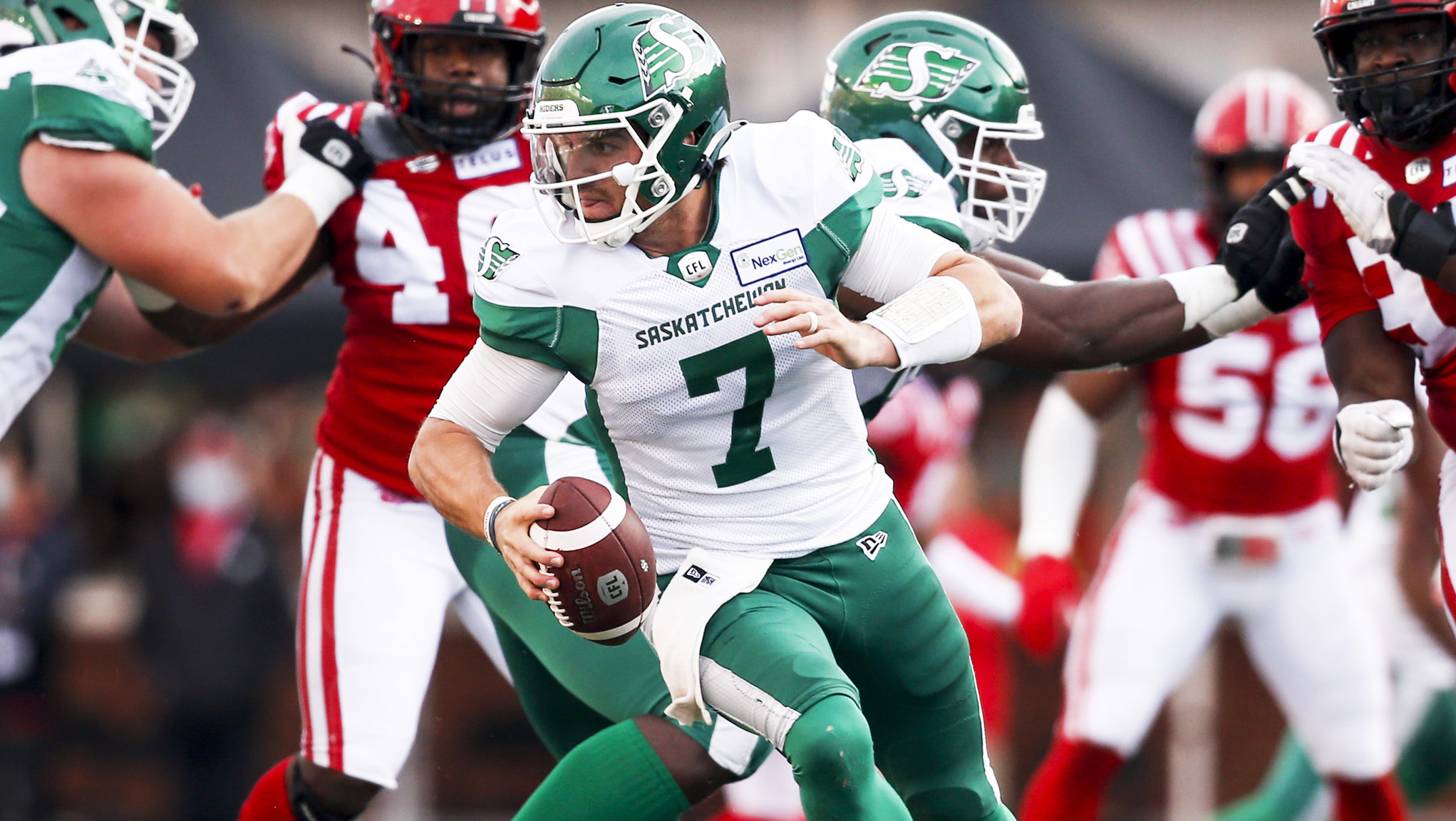 Cody Fajardo and co. are hoping for a win against the Calgary Stampeders this weekend to stay in second in the West (The Canadian Press)

Evans is Fajardo’s favourite target. That was already clear in their only full game together with Evans leading the receiving corps with 10 targets and seven catches. While none of them were the deep ball that the Riders are hoping to improve on, Evans is Fajardo’s go-to in all situations.

In 2019, Evans led the Roughriders with 15 deep ball receptions and his 21 second down receptions were a close second on the team.

With the addition of Duke Williams, the Riders bring in a player who already knows Jason Maas’ philosophy and offence from Edmonton. That was an offence that he starred in with nearly 1,600 yards, 29 second down catches and 22 deep ball receptions.

Will it mean they’re the ammunition to deliver the knockout punch to put the Stampeders back on their heels? We can’t know for sure until we see it for ourselves on Saturday.

Just because Williams and Evans hit the lineup doesn’t mean results will be instant. Three things have to go right on a passing play; the receiver has to run the right route, the quarterback has to put the ball in the right place and offensive line has to give him enough time to make that throw.

At times, all three things have failed the Riders.

However, time is of the essence and that time is 60 minutes on Saturday. The Riders need to find the same type of spark coming out of their corner as the Stampeders did three weeks ago.

Or Saskatchewan may soon be hearing the ref yell, ‘10!’ on their chances of hosting the Western Semi-Final.