The Roughriders and Stampeders in the Western Semi-Final is not a battle of strangers. They’ve played three times already in the back half of the season and every game went down to the wire.

The first game came down to Cody Fajardo throwing an interception deep downfield with a second left with a chance to win.

Their second meeting came down to a walk-off game-winning field goal by Rene Paredes.

The final meeting was another dramatic finish, with Duke Williams catching an onside kick to seal things off, though the Stamps did get the ball back with a chance for a late miracle.

I don’t expect much different on Sunday.

I’m focusing on five matchups I’ll keep my eye on and yes, I’m not putting Bo vs Cody in here, because…duh!

RELATED
» Prediction Time: CFL.ca writers make their playoff picks
» Ten players to watch on Sunday
» Head to Head: Who has the edge in the Western Semi-Final? 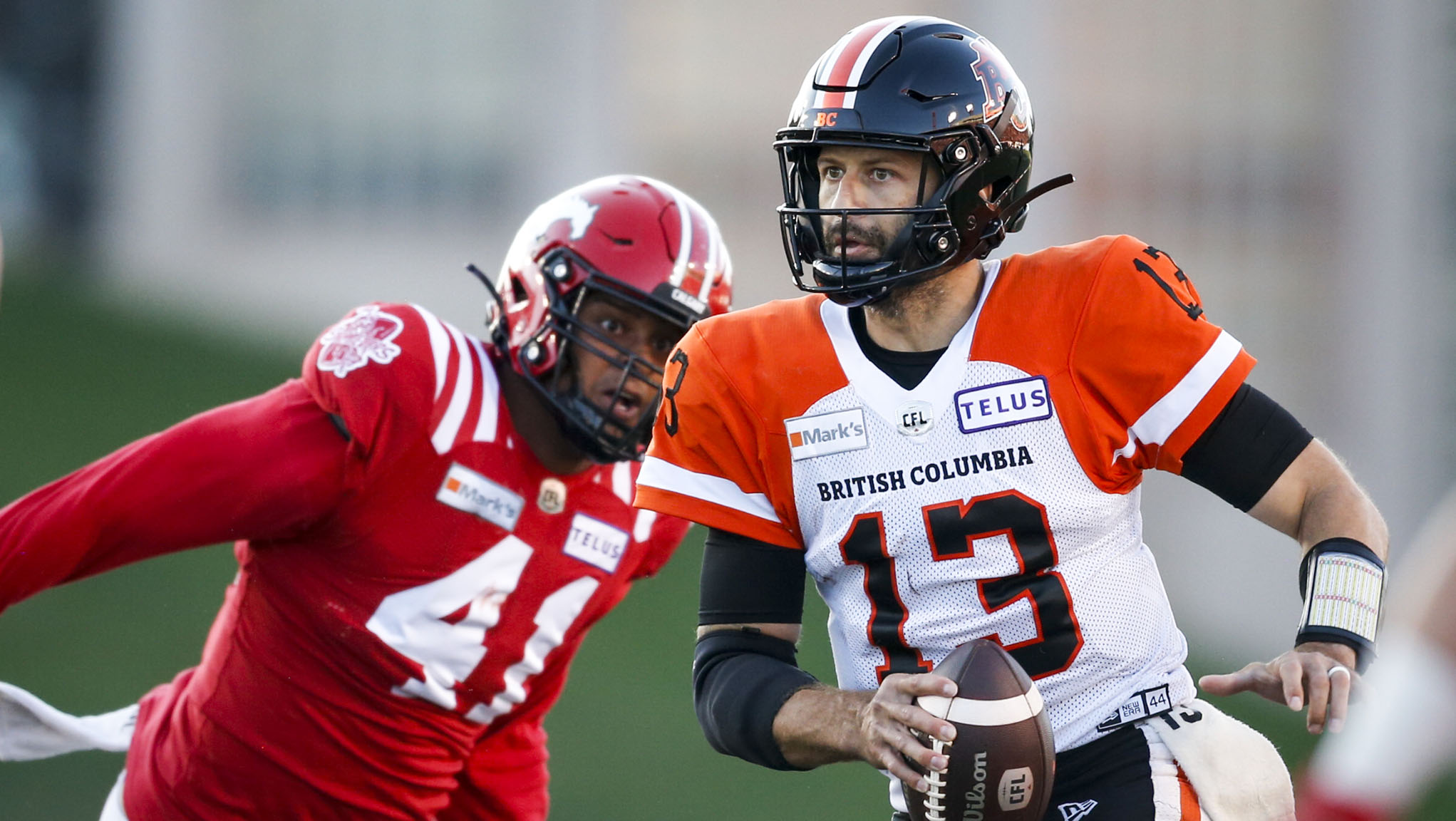 Noted QB chaser Mike Rose, seen zeroing in here on Michael Reilly, was a force in the Stamps’ three meetings with the Riders this season (Photo: The Canadian Press)

The Calgary Stampeders’ all-star defensive tackle Mike Rose had two sacks in the second game against the Riders but throughout the three-game series, Rose was a menace for the Riders’ interior of Dan Clark, Logan Ferland and Evan Johnson.

If the Riders can control the interior of the Stampeders’ defensive line, they could also try to get William Powell and their struggling run game going to take some pressure off of Fajardo.

If Rose is once again a constant threat of getting through to Fajardo up the middle, it won’t be easy for Fajardo to keep his eyes downfield to find his talented receiving corps to get the air game moving.

In two wins for the Stampeders, Carey had an average of 7.1 yards and 5.5 yards per carry. In the loss, he only had 4.1 yards on the ground. It was vital for the Riders to keep the Stampeders in second-and-long scenarios, which also played a role in having better second-down success against the Stampeders.

Second-and-four or less is just too easy for Bo Levi Mitchell and Dave Dickenson to call the game.

The men in the middle of the Riders’ defence need to get their noses dirty. Of course, Micah Johnson was the other defensive tackle all-star with Mike Rose, so this game features some power up the middle. Deon Lacey has been an underrated contributor to a very good Roughrider defence that was No. 2 against the run this season in yards allowed and yards per carry.

If they control Ka’Deem Carey, they’ll allow their talented secondary to be in better situations to make a play. Remember, the Riders had three interceptions against Mitchell in their win against him this season. 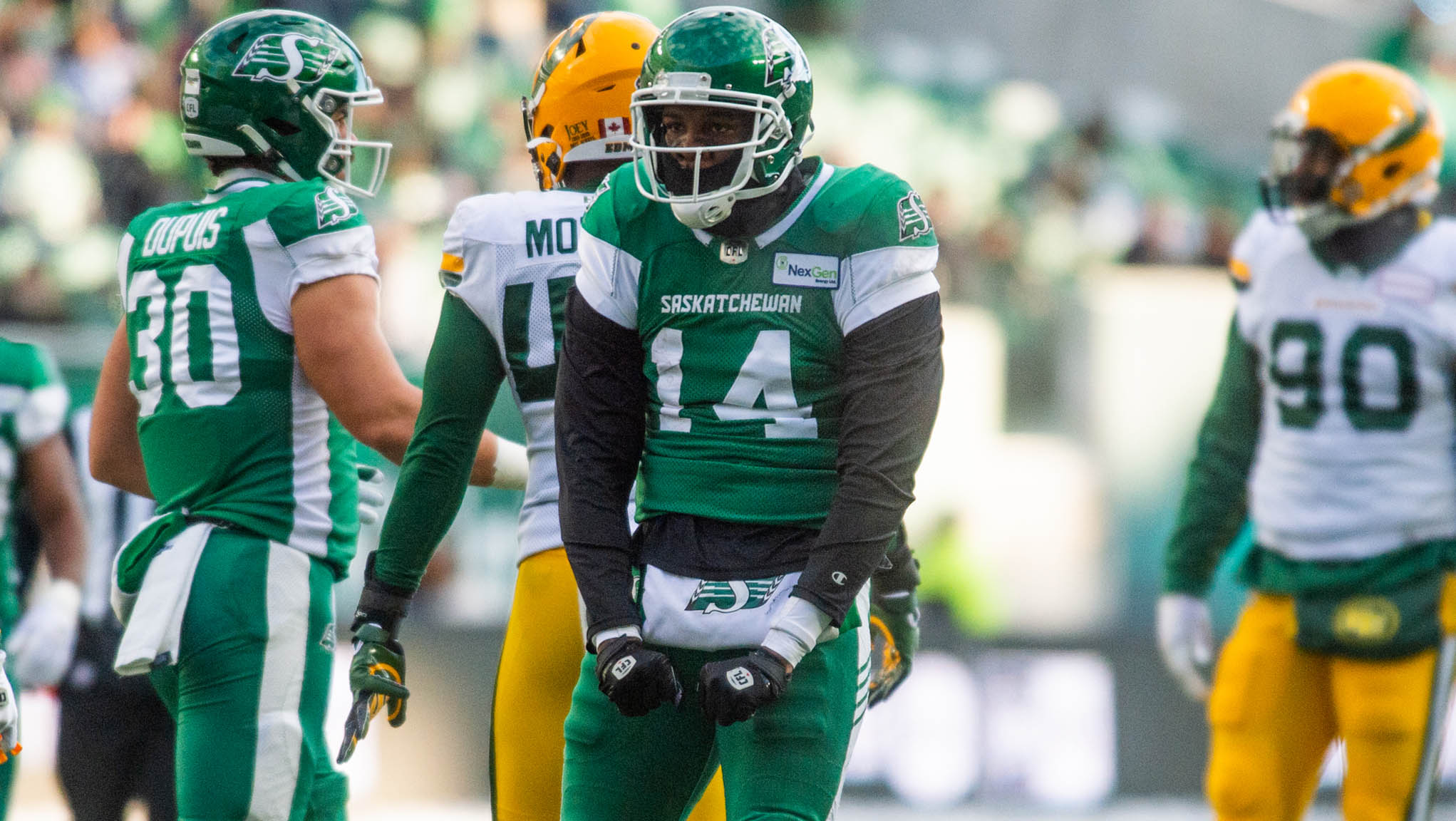 A late addition to the Riders’ roster, Duke Williams could be the team’s playoff x-factor (Matt Smith/CFL.ca)

Duke Williams vs. everybody

After a few games to get into a rhythm, the former Edmonton deep threat exploded for eight catches, 146 yards and a touchdown before being rested in the regular-season finale.

It was the Roughriders’ best single game outing by a receiver in all 14 games this season. Not bad for a guy who showed up in the back half of the season after a stint in the NFL.

If the Stamps allow that type of room for Williams, it could turn into a long afternoon for Calgary. The weather is also looking fantastic for Nov. 28, so nothing should impact how comfortable the quarterbacks are throwing the ball down field.

Leonard and Woodard were 1-2 in the sack race this season, while the Stampeders allowed the second-fewest sacks.

Leonard especially has been trouble for every offensive line this season when he’s played. He has three sacks against the Stampeders this year.

Bo Levi Mitchell has not had his traditional MOP-calibre season and if the Riders are able to get to Bo, he can’t do what Fajardo can in regards to running around and extending the play. For the Stampeders to win, they need Mitchell to have the time to find a talented receiving group.

And in order to do that, they’ll have to pitch a near shutout against the Riders’ two dynamic pass rushers.

The Riders and Stampeders will both proclaim they have the best kicker in the league. This season, they can both be right.

Paredes and Lauther have been pressed to kick field goal after field goal and a lot of their wins have been close ones where the consistency of their field goal kicker could have been the difference between either of these teams making the playoffs.

Of course, we’ve already had one game in this series come down to a game-winning kick with Paredes sending the Stamps home victorious.

With these two teams so evenly matched, I’m a believer one of these two could have the game on their foot with zeroes on the clock and both hope they don’t have a rare miss earlier in the game that potentially are the difference in a one-point game.