The closest coaches get to game action is still far from it. Controlled intrasquad games come with little contact, the quarterbacks don’t need to be worried about being touched and there are absolutely zero tackles.

However, the coaching staffs around the league will have to make do with what they have under once-in-a-lifetime circumstances.

In Saskatchewan, Saturday saw nearly 3,000 fans show up for the Riders’ Green and White game. 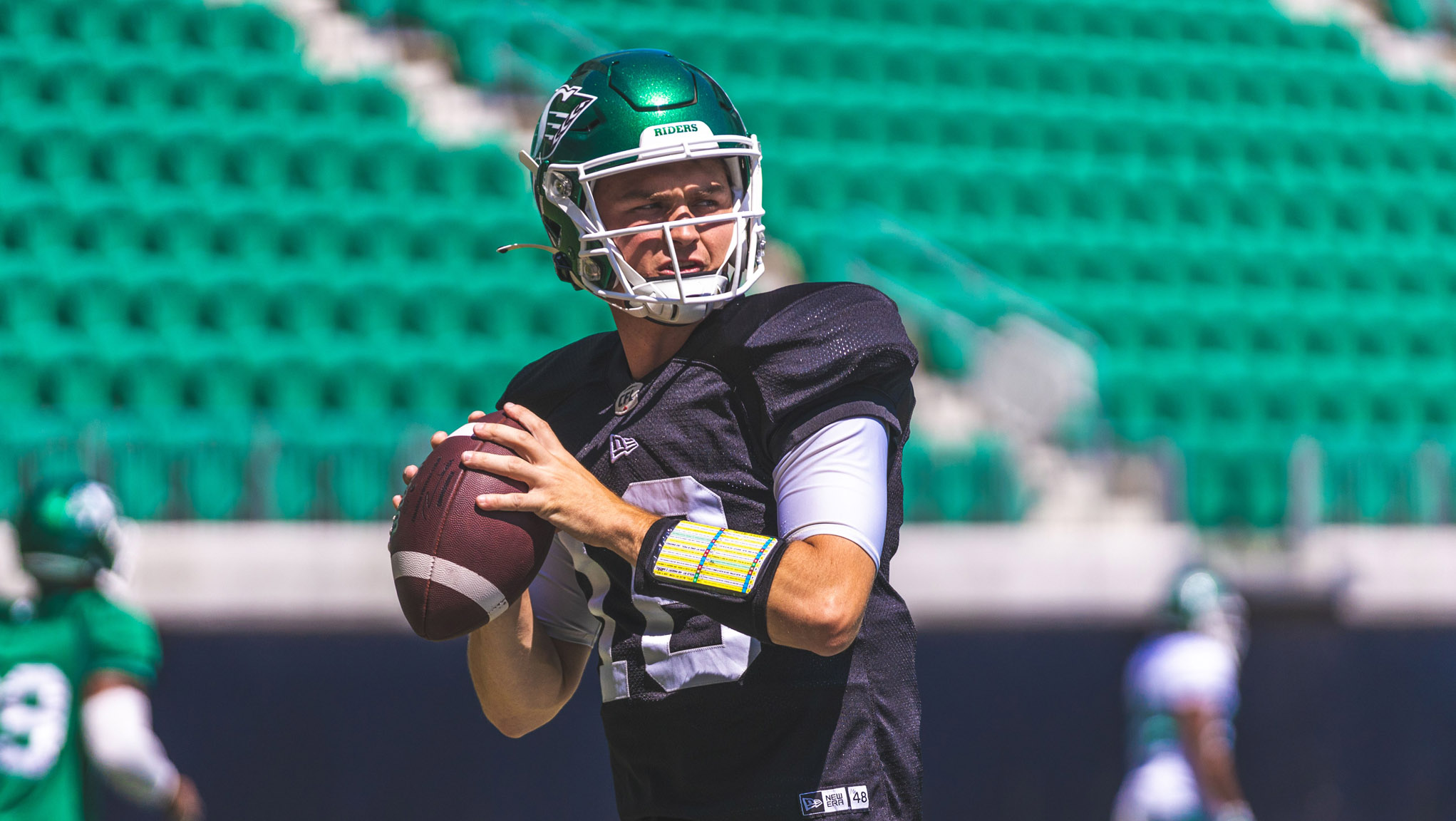 Going in, the roster is fairly set at certain positions. Still, coach Craig Dickenson was hoping to see some separation at spots that have had tremendous competition throughout training camp: Backup quarterback, Canadian receiver and linebacker.

Instead, the biggest thing that struck Dickenson was conditioning. He called the scrimmage short, noticing his players were clearly not yet in game shape.

Clearly, a lot of time off for the players has meant there will be an adjustment period with the 20 second clock catching up to some of the Roughriders.

The next observation was the difference between the offence and the defence. The Riders’ offence wasn’t able to get into the end zone, while series after series there were pressures, sacks on the Riders’ quarterback, three interceptions and what could have been two more.

The way quarterbacks were under pressure didn’t exactly alleviate any concerns the Riders had going in with the offensive line with so many changes from a solid group in 2019 that helped protect Cody Fajardo and gave William Powell room for a 1,000-yard season.

The good news for the Riders is that on the three drives Fajardo handled, he wasn’t pressured at all with the starting group, which is without veteran Evan Johnson due to the birth of his child.

It’ll still be extremely difficult for everyone, not only the Riders, to get a sense of who can perform when the lights come on.

Dickenson says as much as they got what they needed out of their scrimmage, it is nowhere near as good as pre-season action.

“I hope we got enough but there’ll be some question marks that honestly won’t be answered until probably Week 2 or 3,” he said.

What about the positions he pointed out from earlier in the week?

As much as Dickenson and the other coaches need to grade out the 60-plus plays run on Saturday, Dickenson did point out former NFL first round pick Paxton Lynch managing a good drive at the end of the scrimmage that led to what would have been a game-winning field goal if the score at all mattered – which it didn’t.

Not to say Isaac Harker played himself out of the back-up job. He completed six of his eight passes.

The linebacker position has definitely been one to watch all of camp in Saskatchewan with an outstanding trio of Solomon Elimimian, Cameron Judge and Derrick Moncrief all not returning from 2019.

But none of them really stood out. Instead it was Gary Johnson Jr., DeMarquis Gates, Deshaun Davis and Nigel Harris who caught Dickenson’s attention. Gates and Harris both had interceptions.

I’m not sure if anyone really separated themselves. Brayden Lenius, Justin McInnis, Terrell Jana and Mitchell Picton all caught a few passes. Unfortunately, Lenius left the game injured.

The local product, Picton, has been trying to find his way into the starting offence since he came out of the University of Regina program three years ago. He definitely caught Dickenson’s attention with five catches and made himself a reliable target for almost all the Riders’ quarterbacks. He caught passes from Harker, Mason Fine, Paxton Lynch and Tom Flacco.

“He’s so smart. He knows where to play. We can put him in any position at receiver and he pretty much knows what to do,” Dickenson said of Picton. “His versatility is going to be a real strength to make the club because he can play any number of positions on offence.” 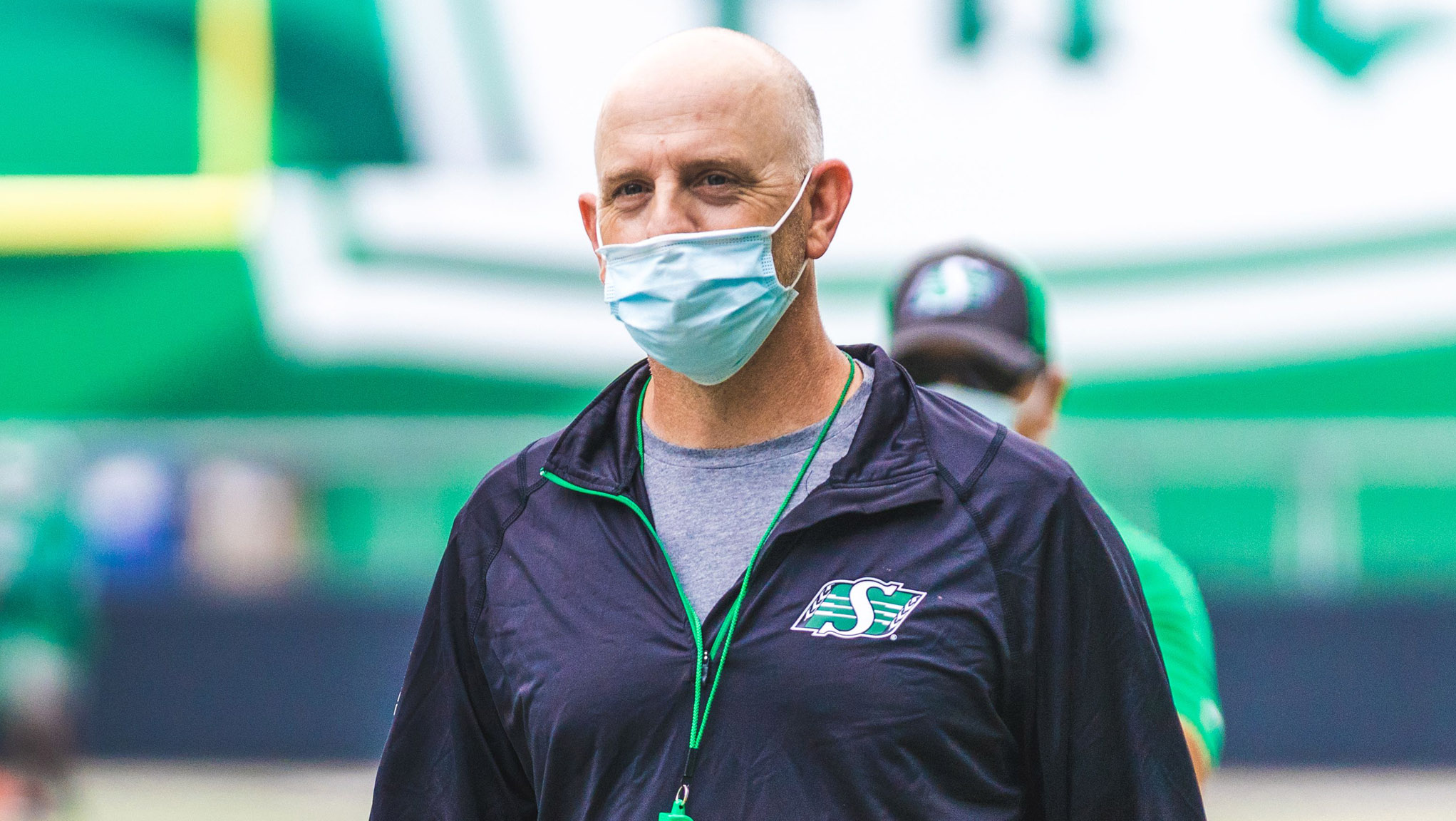 Riders head coach Craig Dickenson will use Saturday’s scrimmage in lieu of pre-season games to further evaluate his roster ahead of Friday’s cutdown deadline (Photo: Riderville.com)

Now, did anybody play themselves onto the roster?

From many of the media observers in attendance, it was hard not to ignore No. 92 and it has been that way through all of camp, as defensive lineman Garrett Marino is pushing for a regular rotation when Week 1 arrives.

“He’s in the backfield all the time. He has a tendency to play on that side of the line of scrimmage and that’s what we like.

“We’ve had to reel him in a little bit. He was really aggressive and pushing the pile early,” Dickenson said.

“We had to visit with him to say, ‘We want you to be physical and we want you to knock people back but we also want to take care of each other.’”

If Marino does make the team, one should fear for opposing offensive linemen when he doesn’t have to be mindful of the health and wellbeing of who he is lining up across from.

Dickenson says he and general manager Jeremy O’Day will meet the evening of the 29th to figure out the final cuts. As he noted, by no means will the team on Week 1 look like the team that lines up for Week 4 or 5. Without pre-season games, it feels like while the games will matter in the standings early, they’ll matter more for coaches and managers to figure out who should be on the field for the stretch run this fall.