Timing is everything in life and the CFL’s All-Decade Team presented by LeoVegas is no different.

Let’s be realistic about this when it comes to decade teams: It’s about the timing of when you came into the league.

There will be great players who have a fantastic 10-year career, but it’s spread out over two different decades, leaving them off both the 2000 All-Decade Team or this one.

When you look at the ballot of players whose careers hit perfectly for this decade, Fantuz is a no-brainer for the All-Decade Team.

But, timing is everything.

So I’m going to give some love to the half-decade squad, some of whom probably didn’t even know the CFL existed at the start of this decade but have turned into superstars.

Here’s the criteria: The only stats that count start in the 2015 season.

So while Henry Burris or Ricky Ray could possibly edge out Bo Levi Mitchell for quarterback of the All-Decade Team, that’s not the case on this ballot.

So Mitchell and Harris in the backfield could be the same, but where the difference really comes into play is the receiving corps.

S.J. Green, Emmanuel Arceneaux, Weston Dressler, Adarius Bowman, Nik Lewis, Chad Owens and Marquay McDaniel is a heck of a list for the All-Decade Team, but they were all around in 2010 and their careers went deep (or in the case of Green, still going) into this decade.

Green’s 2015 numbers thru 2019 are still great, with four 1,000-yard seasons and an injury-shortened campaign to miss hitting all five. But guess who has better numbers than S.J. over these five years catching the ball?

Bryan Burnham, Derel Walker, Greg Ellingson and Brad Sinopoli. Will any of these guys make the all-decade team? Maybe one of them…maybe none.

Plus, Brandon Banks will make my half-decade team because in the last couple of seasons he’s put together remarkable, jaw-dropping numbers in the receiving and return game. Plus, winning a Most Outstanding Player award helps his resume.

Sorry, S.J., your numbers were good and you’re a no-brainer for the All-Decade Team, but you just missed the cut for this squad.

Let’s head to the offensive line, where Derek Dennis and SirVincent Rogers make a very hard debate who gets the tackle spot beside Stanley Bryant, who is another mainstay for both the full and half-decade teams.

Chris Van Zeyl is still in this debate as well, though should be alongside Bryant when the All-Decade Team is announced.

When it comes to the guards, Brendon LaBatte is hard to argue against EVER for anything over the last 10 years for offensive linemen, whether it’s been through 10 years or the last five.

Then it gets to the debate for a player like Ryan Bomben, whose career didn’t become all-star calibre until 2015 and was an East All-Star for four straight seasons.

But the man who I’m taking has been a CFL All-Star for two straight years after being drafted in 2016, and that’s Brandon Revenberg. The third overall pick from that season has been everything Hamilton has wanted and should have plenty more accolades coming his way in the next decade after finishing strong in this one.

When it comes down the middle of the offensive line at centre, Jon Gott likely gets the nod for the All-Decade Team. For the last half decade, though, 2015 draft pick Sean McEwen has become one of the most consistent and dependable centres in the league, earning the Argonauts’ top offensive lineman award three of his first five seasons.

With two Grey Cups, three CFL All-Star nods and as the reigning defensive player of the year, few have had an impact on the league over the last five years the way that Bombers DE Willie Jefferson has (Johany Jutras/CFL.ca)

Now, let’s head over to the defensive side of the ball.

Like Andrew Harris or Bo Levi Mitchell, there is no question that Charleston Hughes is both an All-Decade Team guy and a half-decade team guy after leading the league in sacks for almost all of the last five years.

But who is the opposite defensive end? Sorry to John Bowman, whose consistency makes him an easy All-Decade Team selection, but outside of Hughes, has there been anybody more impactful and exceptional from this position than Willie Jefferson?

Pssst: The answer is no.

Down the middle of the defensive line, Almondo Sewell is another player who, along with Ted Laurent, Micah Johnson and Cleyon Laing make an oustanding debate for two guys on the All-Decade Team and have the resume for this half team.

However, there is a defensive tackle that I believe has had just as much or more impact recently that I can’t ignore: Dylan Wynn. In three seasons, he has become more dangerous getting to the quarterback than any of the above mentioned names, except for maybe Micah Johnson.

Johnson and Wynn are my duo for this group.

Now we get to another nearly impossible debate for linebackers.

Elimimian is a no-brainer for the All-Decade Team with his MOP award in 2014, but does he cut it for this half-decade team?

Adam Bighill makes it with two defensive player of the year awards, but I’m going to have to give the slight edge to Alex Singleton over Elimimian, but only slightly as the top guy in the middle over his three seasons.

Singleton was likely on the road to his third straight CFL All-Star nod if it weren’t for his ability to crack the NFL.

As for the SAM LB/nickel DB position, it’s relatively new for the All-Star nods, with only the three seasons it’s been given its own spot. Kenny Ladler, Don Unamba and Derrick Moncrief are the players that have won it.

Based on this, Don Unamba had another impressive season there last year, as his career has come on strong in the last three seasons. 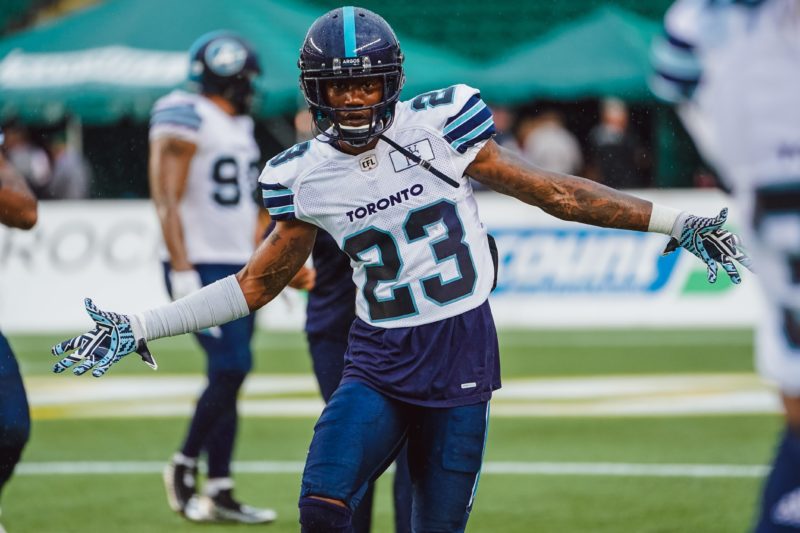 T.J. Heath only played three seasons in the CFL, but pulled in 15 interceptions and was a two-time CFL All-Star in that time (Photo: Argonauts.ca)

Now to the defensive secondary. Ciante Evans was a top shutdown guy in Calgary and I want to give some love to Tre Roberson, whose two years have absolutely been better than any two years of any corner in the game over these last five years.

At halfback, Ed Gainey‘s ability since coming to Saskatchewan in 2016 launched him into this conversation with two league All-Star selections in 2017 and 2018.

The only other halfback to have two league All-Star nods over this time frame is T.J. Heath, although it’s tough not putting Jamar Wall on the list. Wall has eight interceptions over the last five years, but Heath plucked 15 in his three seasons in the CFL.

Safety is without a doubt, no questions asked, Taylor Loffler.

Rene Paredes and Rob Maver are the unquestioned leaders in the kicking game since 2015.

And in the return game, there shouldn’t be much of a debate that since 2015 Chris Rainey has reigned supreme over any of the other return men.

So here’s the breakdown of what a team would like if we started evaluating from the mid point of the ’10s.

As for the coach, the All-Decade Team should be John Hufnagel and for the half decade, his replacement in Calgary, Dave Dickenson.