Once again, it’s that time of year to dive into the numbers and see who makes a splash at the CFL Combine presented by New Era.

Thankfully this year we have returned to “normalcy” by having athletes participate in person so that scouts and evaluators from across the CFL can parse what they’ve seen on film with the face-to-face eye test, unquestionably the best way to access the exceptional athletes that make up the CFL Combine roster.

While the numbers aren’t everything, they do hold value in proving intangibles such as work ethic and consistency. Rarely, if ever, does a below average athlete get drafted, which means players in Toronto this weekend will need to prove they belong, with goals of setting a new standard for what combine testing excellence looks like.

With that in mind, here are some of the names I expect to top the charts for each of the combines traditional measurements. 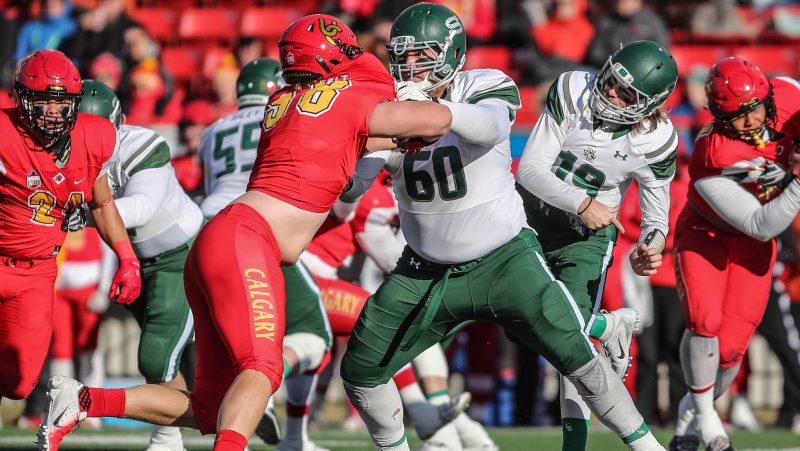 Based on the size of many global prospects, I expect big numbers from many of our international invitees on the hallmark strength competition, but we are focused on national participants here and few are more promising than Saskatchewan Huskies All-Canadian standout Noah Zerr.

Zerr is the best blocker in this class and was impressive to spend time with in Toronto ahead of testing. He’s well spoken and has that classic prairie presence but don’t mistake his calm demeanour for a lack of aggression on the field and in the weight room. Zerr speaks about attacking each day with intention and has the solid build of a lineman ready to push some serious weight come Saturday afternoon on CFL.ca.

Two of the most explosive players in this draft just happen to be brothers, twins in fact, from the same school who play the same position. The Philpots also happen – unsurprisingly – to be very similar athletically with Tyson having a slight edge in bounce and speed while Jalen is more likely to drop the hammer and run through a defender.

Tyson should get the best of Jalen here, but based on film, route running and their habit for climbing the ladder to make difficult catches I can’t wait to see what number gets posted by two surefire first round picks.

The broad jump typically favours two body types. One is the mega explosive linebacker or defensive end with so much muscle on their lower half that explosion horizontally is a natural part of their athletic skillset. The other is the lean, long receivers and defensive backs who can float on this test much the same way they do when playing the ball in the air.

As an elite return man and second team all-star receiver Guelph Gryphons REC Kiondre Smith falls in the footsteps of Kian Schaffer-Baker with another similar body type in Clark Barnes following close behind in the Gryphon pipeline of bouncy ball catchers. Smith should clear 10-feet in the broad jump and place amongst the National Combine’s best.

The 2022 CFL Combine has a few trends that consistently appear as I ready for our CFL.ca weekend broadcasts, perhaps none more notable than undersized players with above average quickness and speed.

That formula typically leads to quick starts in the 40-yard dash and has already shown to be a benefit for the likes of McMaster DL Enoch Penney-Laryea, Manitoba REC Gavin Cobb and Calgary DL Jacob Plamondon at Regional Combines this year.

As for those who haven’t laid down times yet, I expect Alberta Golden Bears DB Jayden Dalke to post a quick first 10-yards with his unique stride length and quickness. The longtime CJFL standout has owned the back end at U of A since 2019 and should be amongst the more appealing overall performances this weekend. 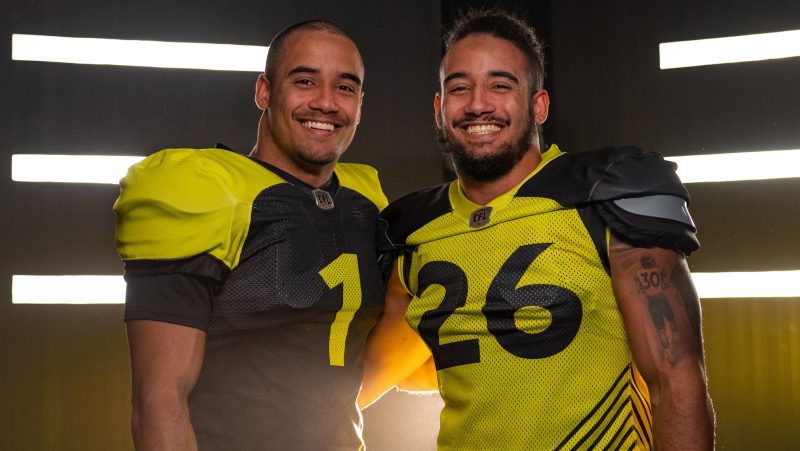 Tre (left) and Tyrell (right) Ford pose together on Friday ahead of the CFL Combine testing on the weekend (Kevin Sousa/CFL.ca)

After each running 4.4s 40-yard dashes at a recent pro day in Buffalo this is an easy pick. A Canadian quarterback running that quick is absurd given the context of recent sprinting performances, but Tre is a bit of a unicorn when it comes to many meaningful athletic measurables for his position. While he doesn’t expect to run this week his twin brother Tyrell will and should set the combine on fire if he hits the same number he did last week, or even lower.

Perhaps the most interesting part of the weekend for Tyrell will be getting to prove he can piece together that speed with coverage skills as he wishes to be given a shot at corner in the CFL before getting moved to free safety. All of this coming after a year where he was rarely targeted due to offences fearing his athleticism and coverage skills, but in CFL Combine one-on-ones QB’s – including brother Tre – will have no option but to go right at him.

The short shuttle is all about being able to stick your foot in the ground fighting gravity and get back the other direction quickly as possible. When discussing quick cuts, low to the ground body composition and contact balance no player stands out more than University of Saskatchewan standout running back Adam Machart.

I’ll discuss Machart’s football accolades and exceptional production much through this weekend’s CFL.ca broadcast, but if there is one test I could see him really rising above the rest at it’s this judgement of speedy weight transfer and footwork.

Similar to the shuttle, but with the added twist of non-linear movement the three cone test is ideally suited to defensive backs who are used to following untraditional paths of movement and can flip their hips smoothly to change direction and accelerate.

With that in mind I have my eye on Regina Rams DB Brandon Gandire and Texas State DB Eric Sutton. Both fit the profile above and have a natural ability to change direction with speed which should result in some special three cone times.