A change in eligibility rules and two less rounds resulted in the 2021 CFL Draft having more players available but gave clubs less chance to make selections.

Allowing teams to pick NCAA players with a year’s eligibility remaining meant some general managers had to decide between taking someone who could step in and help a team now or gamble that they will make a difference down the road, said TSN analyst Duane Forde.

“It makes for a very unique draft and a different strategy,” said Forde. “Now you’re not just dealing with (players) who have come out of school this year, but you’re also dealing with guys who a year from now could be looking at NFL opportunities.”

The Winnipeg Blue Bombers and BC Lions both rolled the dice on the future. The Bombers took offensive Liam Dobson, an Ottawa native who played at the University of Maine but is transferring to Texas State for the 2021 season, third overall. Next up, the Lions selected Toronto native Daniel Joseph, a defensive end who has a year remaining at North Carolina State.

“These are the chances you have to take,” said Neil McEvoy, the Lions co-general manager and director of football operations. “You have to have guys with that type of caliber to make you a better football team.” 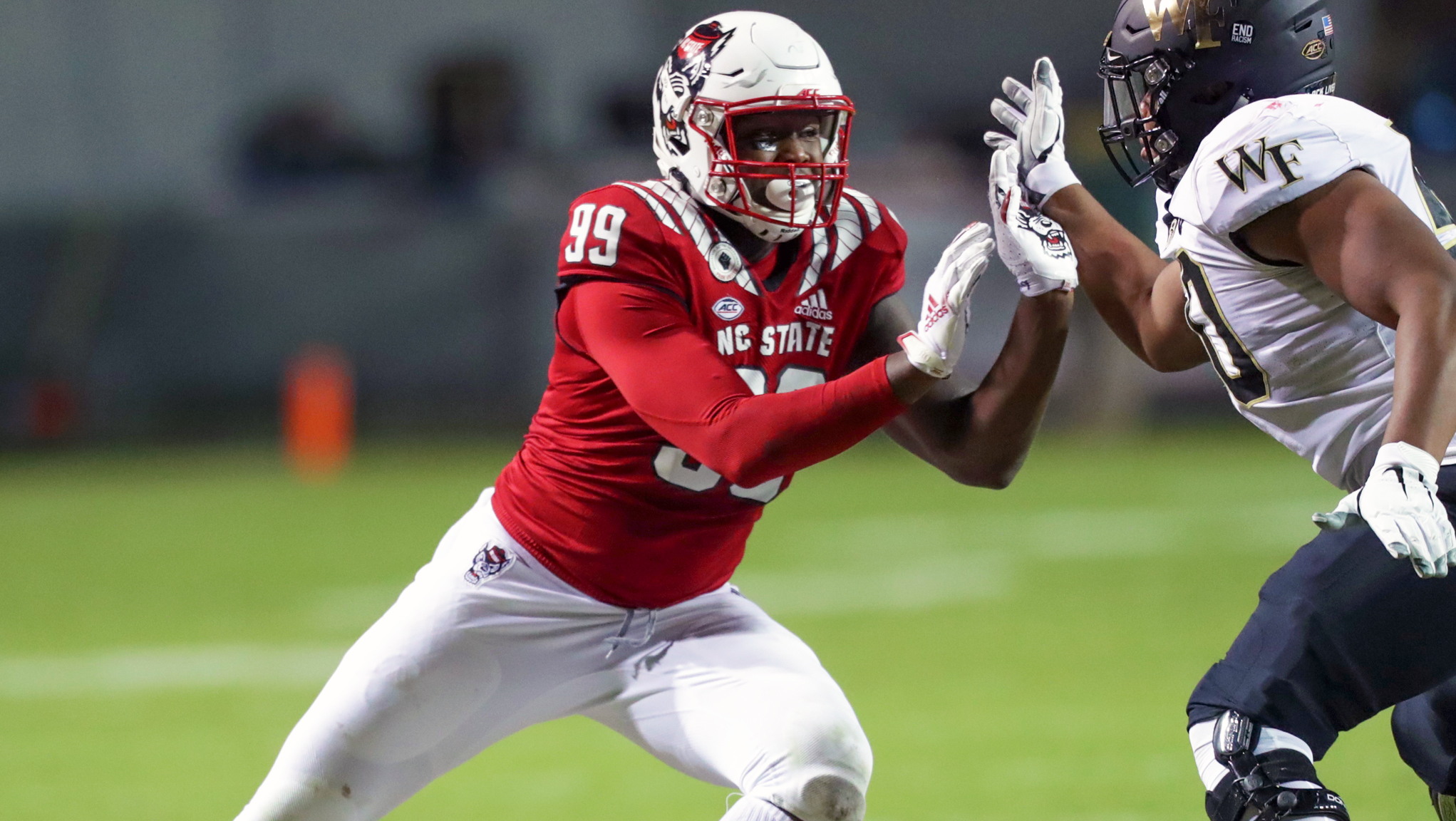 The BC Lions will play the waiting game with fourth-overall pick Daniel Joseph, out of North Carolina State, who could be on the Lions’ roster in 2022 (Photo: NC State Athletics)

Forde wasn’t only impressed with the amount of Canadian talent available this year, but the variety of positions they played.

“It’s crazy,” he said. “One of the things that really stands out, almost even more than the absolute number, is the distribution of those players in terms of position.

Looking at this year’s selections, Forde understands why the Hamilton Tiger-Cats took Jake Burt of Boston College first overall. Born in Regina, Burt grew up in Boston. The six-foot-five tight end combines good hands — he had 23 catches for 307 yards in 36 career college games — with size and quickness.

“As a general rule with the best players, the thing that determines their relative value in a draft is supply and demand,” said Forde. “In this draft class there is only one 260-pound guy who runs the 40 in 4.48 seconds and can catch the ball.

“He’s sort of the most unique guy. There’s just so many different things you can do with a guy with his unique combination of size and skill set.”

Edmonton’s decision to pick defensive lineman Cole Nelson from the University of Alberta fifth overall was both “surprising and not,” said Forde.

The six-foot-six, 312-pound native of Ponoka, Alta., has strength and size. At 24, he’s also older than many of the other draft picks and has played less football.

“He’s still a guy with a high ceiling,” said Forde. “There aren’t a lot of guys with his physical capabilities.
“The thing you add on to that, at his position at defensive tackle, this was not a strong draft class at that particular position.”

The Saskatchewan Roughriders made a steal when they took Logan Bandy, a six-foot-five, 285-pound offensive lineman from the University of Calgary, 38th overall in the fifth round, said Forde. Bandy was originally projected to be a top-20 pick but might have fallen victim to general managers’ overthinking.

“A guy like Logan Bandy was very highly regarded for a long time, but then it almost becomes a case where teams start spending all of their time looking for the negatives and forgetting all the positives that put him up high to begin with,” said Forde.

“Getting him the fifth round, it’s kind of a steal.”

Forde understands why the Calgary Stampeders used a fifth-round pick to take running back Chuba Hubbard. The Edmonton native was selected by the Carolina Panthers in the fourth round of the NFL draft after rushing for over 3,400 yards and 33 touchdowns in three seasons at Oklahoma State.

“You take that chance,” he said. “Running backs (don’t) necessarily have particularity long lifespans in the NFL. I think that’s part of the decision to roll the dice on Chuba.”

Having only six rounds of the draft instead of the usual eight resulted in players like Goldin Mulali of Acadia and Dylan St. Pierre of the University of Ottawa — both receivers — being overlooked.

Forde said the five-11, 195-pound Mulali is cut from the Nic Demski mold while the six-foot-two, 200-pound St. Pierre wasn’t fast but could have been converted to a fullback.

“The level of the game has improved so much,” he said. “Across the board, Canadian university football and the players have improved by leaps and bounds. The improvement is noticeable.”

The success enjoyed by the University of Laval program in Quebec City has forced other schools across the country to be better, Forde said. Since beginning play in 1996, the Rouge et Or have won 10 Vanier Cup championships and appeared in the championship game four straight seasons.

“That is a program that is ahead of everybody else (and) took Canadian university football to a new level in terms of the kind of resources they put into it and just the way they run their program,” Forde said.

“In order to keep up, it has brought everyone else along with them.”