Sean Thomas Erlington doesn’t dwell on what might have been.

Just four games into the 2019 season, Thomas Erlington was turning heads. The Hamilton Tiger-Cats running back had 33 carries for 224 yards and made 11 catches for 193 yards and a touchdown. The Montreal native was named the CFL’s Top Performer for Week 2 and Top Performer of the Month in June.

Just when the future looked so bright an injury to his left knee in a July 4 game against Montreal ended Thomas Erlington’s season.

Time has helped him put things in prospective.

“It was a good start, but it was really only the start of the season,” he said. “No one knows what might have happened if I had played a complete season. I had envisioned myself not necessarily breaking records but just simply performing at my best and just getting noticed by the league.”

Hamilton finished the season 15-3 and were favored to win the Grey Cup. Thomas Erlington made the trip to Calgary and watched with his family as the Tiger-Cats lost 33-12 to Winnipeg. 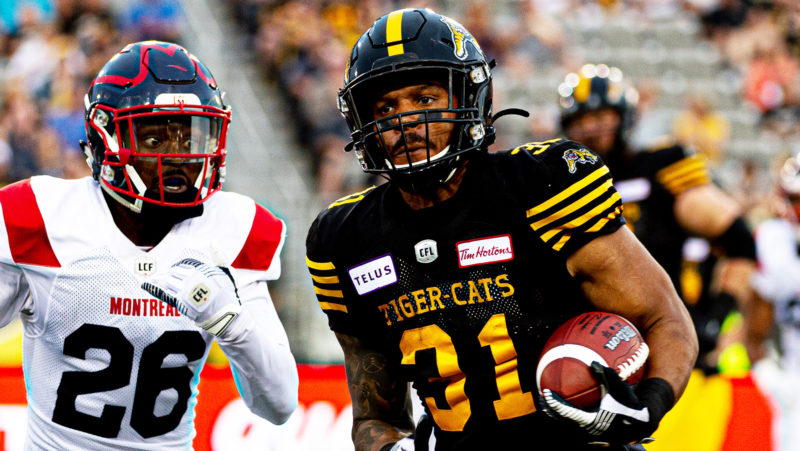 An eighth-round pick by the Hamilton Tiger-Cats in 2017, Sean Thomas Erlington found dominance in the early parts of the 2019 season before a knee injury took him out of action (Ryan McCollough/Ticats.ca)

“You try to think of ways maybe you could have impacted the game in a positive way,” he said. “And even in a negative way, like in the sense maybe you could not have done better than the guys that’s playing.

“It’s just a whole process that you need to go through. You think about it and then just put it aside. It’s a new year to prove yourself.”

The days after the injury were the most difficult for Thomas Erlington. A lot of questions raced through his head with only a few answers.

“It was really hard at first,” he said. “It was mostly knowing what the injury was then getting it fixed. Then the rehab, that’s where it got a little harder.

“You are physically challenged but also mentally getting back on track, following the protocols.”

It was six weeks before Thomas Erlington could put any weight on the leg.

“Every time you want to move, you need to be on crutches,” he said. “Sometimes you feel like you might be able to do a certain movement, but you can’t. It’s just part of the protocol. If you want to heal properly, you just can’t.”

During this rehabilitation Thomas Erlington returned to Montreal and spent time with his family. It helped being away from Hamilton and his teammates.

“Not necessarily because I didn’t want to (be with them) but because it was just reminding me that I was injured,” he said. “I didn’t want that to be on my mind. I had a lot to go through.

“Coming back here, enjoying time with the family, playing video games, stuff like that kept my mind occupied. You can’t really forget about it…but you could be distracted for a few hours. That helps a lot.”

Thomas Erlington’s wait to return to play became even longer when the 2020 CFL season was cancelled due to COVID-19 concerns. The 28-year-old feels confident he could have played last year but believes he will benefit from the extra time.

“There’s always that extra work I put on my knee, other muscles as well,” he said. “It’s more the mental side.

“It made it that I could get my mind right, make sure everything is fine with me physically and make sure I’m prepared for the upcoming season.”

Growing up, soccer was Thomas Erlington’s first love. He was 12 before he saw his first football game and didn’t start playing until he was 14.

He started playing defence then was switched to running back.

As a member of the University of Montreal Carabins, Thomas Erlington won a Vanier Cup in 2014. In four seasons he played 28 games, collecting 1,405 yards and 16 touchdowns.

Hamilton selected him in the eighth-round, 66th overall, in the 2017 CFL draft.

After spending most of his first season with the Ticats playing special teams, Thomas Erlington began to show flashes of his talent in 2018, rushing for 218 yards on 34 carries. He also had two touchdowns during the regular season — one rushing and the other on a blocked punt recovery — and added a receiving major in the playoffs.

Every year, many talented running backs from U.S. schools look for work in the CFL. The five-foot-nine, 217-pound Thomas Erlington is a Canadian that managed to be noticed.

“I think it’s about being consistent,” he said. “Noticing when you make errors and fixing them. I feel it starts from having an impact or just doing your job on special teams at first, doing well in practice and making sure you’re being noticed.

“If you only get a few chances during a game, make the best of it.”

It’s been over 20 months since his injury. Instead of wondering what might have happened in 2019, Thomas Erlington is concentrating on what he can do in 2021.

“My goal is to show up even better than I was before,” he said. “Just give a show and give the Canadian football fans something to cheer about.”