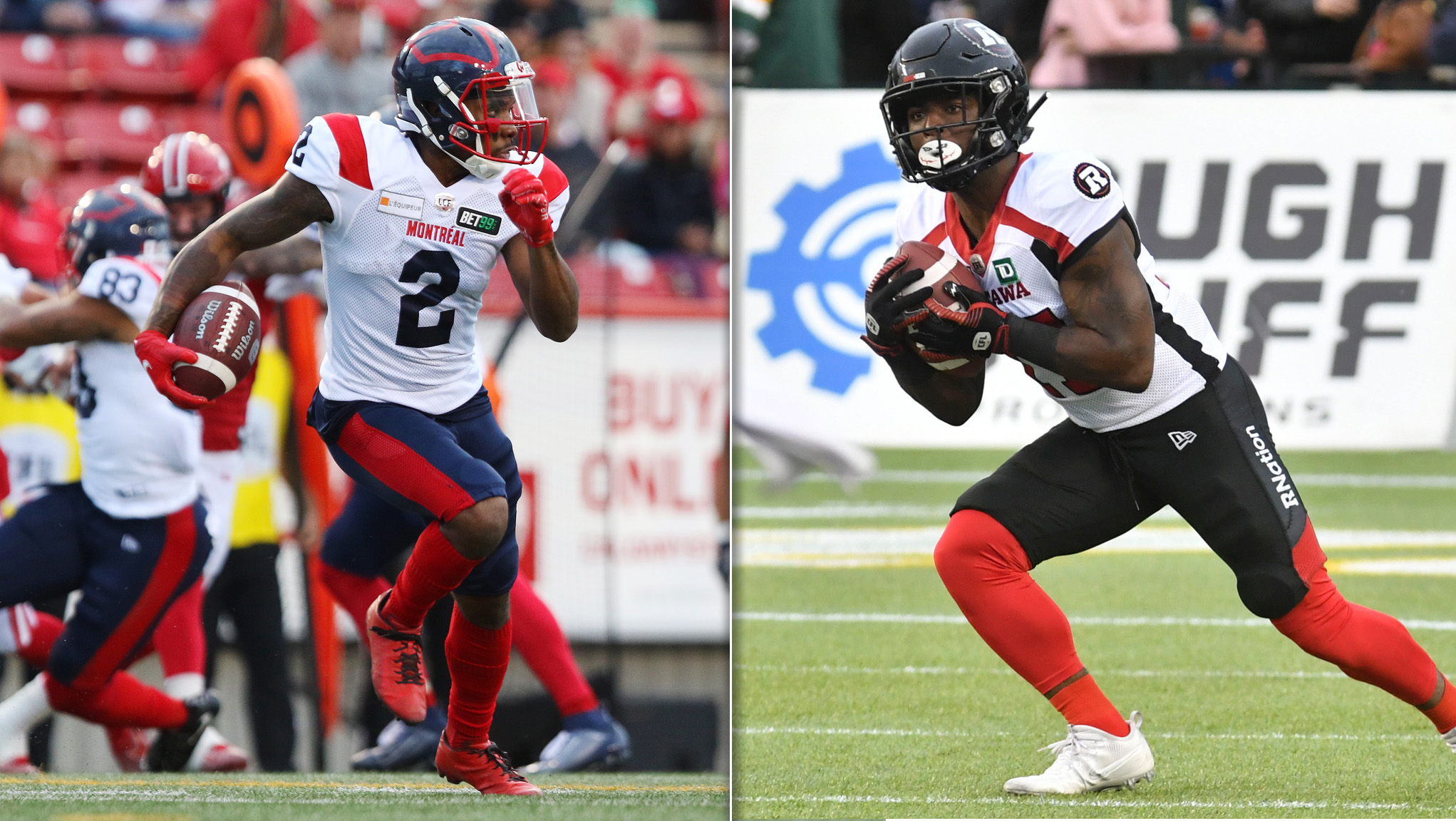 In a game featuring two teams desperately needing a win, a big special teams return could be the difference.

When the Montreal Alouettes (1-2) and Ottawa REDBLACKS (1-2) meet at TD Place Stadium to get Mark’s Labour Day Weekend underway on Friday night, both will have returners with the ability to put points on the board or give their offence instant field position.

“I do feel that pressure,” said Alford, who returned a punt 85 yards for a touchdown in Montreal’s season-opening 30-13 win over Edmonton. “My team, they depend on me.”

Dedmon doesn’t dwell on how he might impact a game.

“My college coach used to say, if you’re thinking you’re stinking,” chuckled Demon. “I never try to think about things like that. I just try to catch the ball, focus on the little things, make the big play happen.

“I trust my teammates to make their blocks and I just read off them.”

Alford has returned kicks since beginning to play football in his hometown of Greenville, GA.,

“I would take them back to the house when I was just playing little league ball,” he said. “To be a good returner, it’s something you can’t teach.

“There is more structure to a kickoff return,” said the 29-year-old who also is a wide receiver. “It’s different.”

Dedmon, five-foot-10 and 200 pounds, saw some service as a returner during four seasons with the College of William and Mary in his hometown of Williamsburg, VA., but focused on being a receiver his final two years.

When Dedmon signed with Ottawa in 2019 Winston October, his receivers coach in college, was part of the REDBLACKS staff.

“He knew I could return the ball so I was blessed with an opportunity to show them,” said the 25-year-old. “My story has not finished yet.”

Injuries cut his first season to just five games, but Dedmon still managed to return a punt 95 yards for a touchdown and a kickoff 111 yards for a major.

“I turn into a running back,” he said. “I find a hole and try to get through it. Hopefully I can try to get six. If not, I’m trying to make a big play for my offence to be in a better position.

“It’s more catch the ball, get vertical as fast as you can, start breaking angles.”

Both men said the CFL rule on punts that the kicking team has to give the returner five yards while catching the ball gives them a huge advantage.

Dedmon didn’t know about the five-yard rule until his first practice in Ottawa.

“I thought, ‘Wow, that’s dope,’” he said. “That gives me more space. It’s part of the game I really appreciate.”

Dedmon’s favourite player growing up was Dante Hall, who had over 12,300 return yards and 12 touchdowns in his nine NFL seasons with Kansas City and St. Louis.

“There’s nothing wrong with watching other guys but I just do what I do,” he said.

Alford bounced around the NFL after being taken in the seventh round, 238th overall in the 2015 draft.
He played six games for the Toronto Argonauts in 2018 before being released in May of 2019.

“It was frustrating,” said Alford. “When they released me, I sat at home for four months. I was a little down on myself but it worked out. Montreal reached out to me because they needed a returner.”

Alford joined the Als in September of that year and had an immediate impact.

He returned two punts for touchdowns in his first two games. In Montreal’s East Division Semi-Final loss to Edmonton, Alford returned a kickoff 99 yards for a touchdown, the third-longest in CFL playoff history.

Teams not wanting to be burned by the heat Alford can bring have started kicking the ball away from him.

“It is frustrating,” he said. “It makes it harder for the schemes and just for me to get myself going like I should.”

Dedmon doesn’t see Friday’s game as a showdown between him and Alford.

“He’s a great player,” Dedmon said. “I’ve watched film on him. I wish him nothing but the best, but I just focus on my team and just trying to get this one.

After winning their opening games Montreal and Ottawa have lost back-to-back contests. It’s still early in the season, but with the league playing a condensed 14-game schedule, neither team wants to drop to 1-3.

Dedmon said it’s a chance for Ottawa to move up in the standings.

“This game really matters,” he said. “We win and they don’t get points.

“We’ve really locked in on all aspects of the game. We’re really excited to get out there and play.”