Last week’s decision not to go forward with a shortened 2020 CFL season hit me a like a ton of bricks. Now that I’ve had a week to digest the news, though, I’ve come to a couple conclusions. First off, it’s going to be a real bummer without Canadian football this summer. Second: When the league returns, it’ll be more important than ever.

Sure, as a CFL.ca contributor, I’ll be honest: The initial thought is always “how does this affect me?” Will the website still need content? And if so, what the heck am I going to write about? But I was able to wrap my head around those things fairly quickly. What I haven’t been able to reconcile as easily is how many lives have been, and will continue to be affected by an inability to play this year.

That’s when it really hit me how important this league has been, still is, and will continue to be in the future. The CFL holds a unique position in the world of North American sports. As a professional league, we see some of the highest calibre on-field action anywhere. At the same time, though, the CFL actively promotes Canadian players with its player ratio and connection to university football across Canada. The league’s importance in this country can’t be understated, especially right now.

RELATED
» CFL not to play shortened season in the fall
» O’Leary: Missing the people around the CFL in 2020
» O’Leary: Pinball processes no 2020 season and eyes up 2021
» Collaros, Bighill assessing next steps away from field 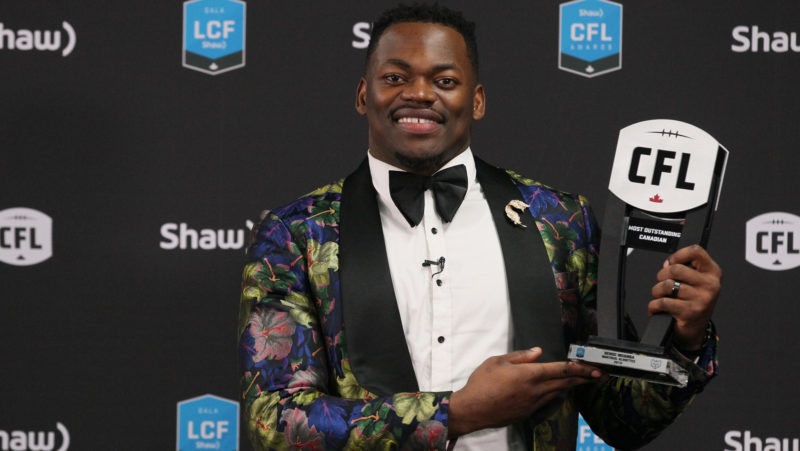 After a couple of looks from the NFL, Henoc Muamba has established himself as one of the top linebackers and Canadian players in the CFL, winning the Most Outstanding Canadian award in 2019 (Dave Chidley/CFL.ca)

There are exceptional football players in Canada. Some of them, like Laurent Duvernay-Tardif, David Onyemata, and Christian Covington, are able to forge successful careers in the NFL. For many others, though, the absence of a Canadian Football League would likely be the end of their athletic careers.

Because half of a CFL team’s roster is reserved for Canadian players, the league offers an opportunity for hundreds of players when their college or junior careers come to an end. Most guys started their football journey as pre-teens and have been grinding in the weight room and on the practice field ever since. That chance to keep things rolling is what the CFL has always provided and that shouldn’t be taken for granted.

It works similarly with American players finishing their NCAA careers. There are only 32 NFL rosters to crack, which leaves literally hundreds of incredible athletes looking for somewhere to play. For the better part of the last three decades, the CFL has been the most consistent and viable option for full-time, high-level work in football.

Some guys, Canadian or American, are able to turn CFL gigs into their primary living, while others couple football jobs with another career. Regardless, the opportunity to turn literal blood, sweat, and tears into a professional career in football is something the CFL has always afforded. That need will still be there going forward.

It’s not just players, though. With nine teams and nine big stadiums, the CFL employs thousands of people across the country. From game day staff to trainers, equipment managers, marketing, public relations, sales and more, each team has hundreds of people instrumental to what happens on a day-to-day basis. I’m not sure what the next number of months hold for many of those people, which is devastating. But I do know how important the league will be for them when next seasons finally gets here.

Commissioner Randy Ambrosie said the 2021 season would be a massive celebration for fans across the country. He’s absolutely right and I truly can’t wait for next summer’s first no-yards call or missed field goal return. But beneath the surface, kickoff in 2021 will be a massive watershed moment for the people affected most by last week’s announcement.

Let’s be perfectly frank: The next number of months will be filled with uncertainty, anxiety and stress for many directly associated with a CFL team. That’s the nature of business in the midst of a worldwide pandemic. But it’s important to remember: This will end and the CFL isn’t going anywhere.

That’s the most important thing. Outstanding Canadian players will still be looking for a place to take the next step in their football careers. Incredible American athletes will be looking north of the border for a high-level option to continue playing. And thousands of people across the country will need their jobs with the team in their city.

That’s why the CFL has always mattered. That’s why it matters now, even without a 2020 season. And that’s why it will continue to matter in 2021 and beyond.