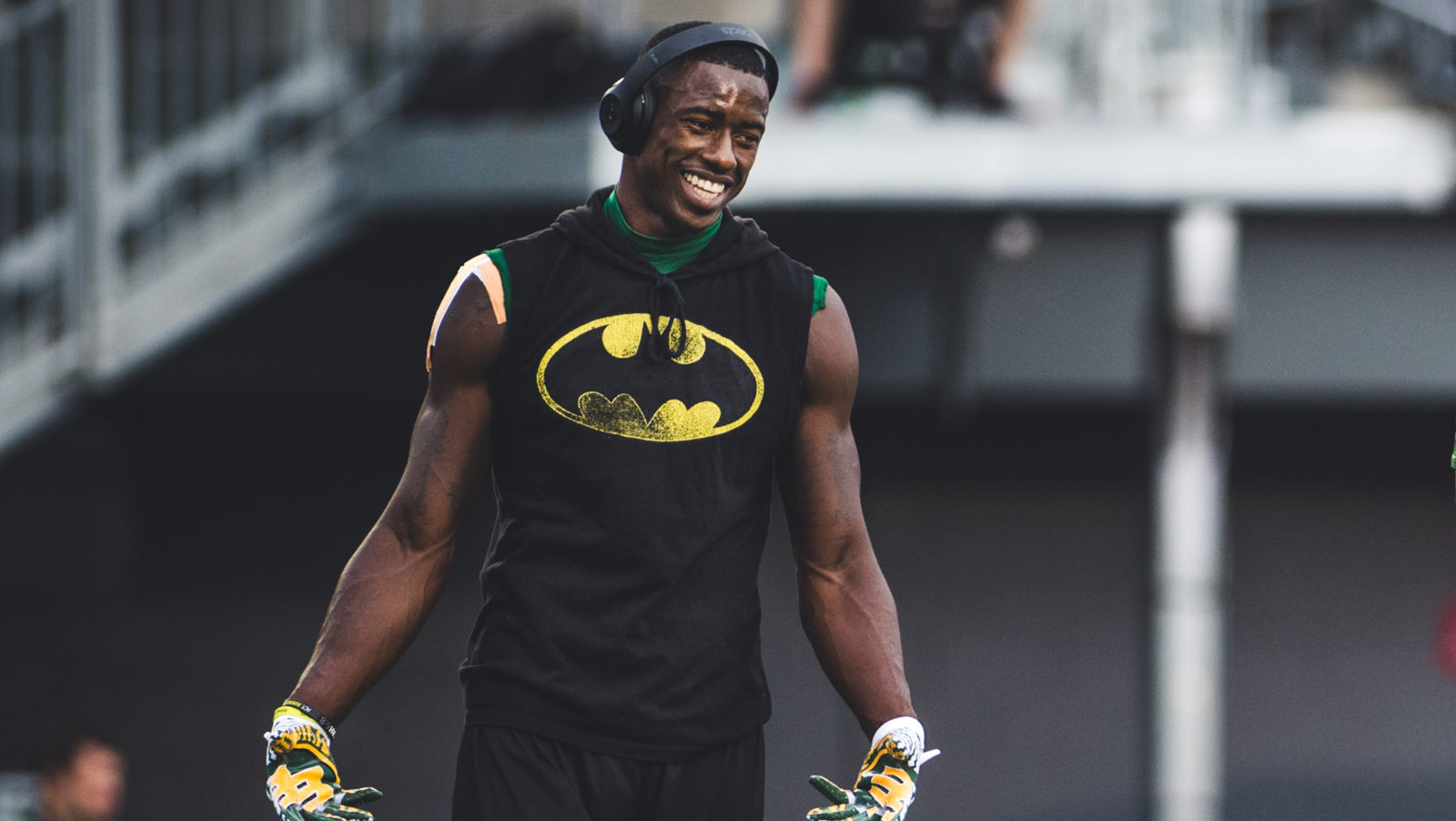 Quiet as a church mouse in the opening hours of free agency, the Winnipeg Blue Bombers unleashed a roar on the second day of the annual talent grab that could be heard across the Canadian Football League.

Vowing to be spectators on the eve of the market opening after concentrating on locking up much of the core from the 2019 Grey Cup team, the Bombers reversed course and landed a marquee receiver in Bryant Mitchell on Day 2, inking the game-changing playmaker to a one-year contract. And, interestingly, the new alliance began with a playful tweet he sent out, and then an inquiry from the Bombers as he quickly became a target for the club

12?! Lol who does this list?!! I’m jk thankful to even be mentioned with this great group of guys. https://t.co/2EBaMoGxLJ

“It’s funny, I was actually talking to Darren (Cameron, Bombers Senior Director of Player and Public Relations) early (Tuesday) morning about an article that came out about the rankings of the free agents,” began Mitchell in a media conference call from his home in Houston, Texas. “I made a joke about how I should be higher in the rankings.

“He responded to it and from there we just got to chatting. Long story short it came to, ‘Hey, we would love to have you here.’ I thought about Winnipeg before… they were actually a place where I thought I was going to sign before I re-signed in 2016 in Edmonton after being cut in ’15.

“I’ve heard such great things. Many of the players reached out to me, many players I’ve known who have played there in the past have told me great things about it. So, for me it was really a no brainer… with Zach Collaros reaching out, (Pat) Neufeld, Yoshi (Jermarcus Hardrick), Willie Jefferson, even Darren (Cameron), Coach O’Shea, Coach Pierce. Those things really touched me and made me feel like this is home.”

Bryant’s numbers in his last year in the CFL were simply sensational. In just 11 games with Edmonton in 2018, he pulled in 60 passes for 867 yards and three touchdowns.

Those gaudy stats first led to a shot with the Arizona Cardinals in 2019 and following his release, he was signed by the Tampa Bay Buccaneers a week later. He had five catches for 32 yards in the Bucs’ first preseason game against Pittsburgh that summer, but also suffered a torn Achilles tendon that ended his season. Tampa brought him back in 2020, but he was released in their final cutdown.

He had informal chats about coming back to Tampa in the fall, but the club then inked veteran Antonio Brown and ultimately won the Super Bowl last Sunday.

“It’s so funny, I think the Tom Brady question is the No. 1 asked question I get from being on that team,” Mitchell said. “I learned so much. Gronk’s (tight end Rob Gronkowski) a great guy. He’s funny. Gronk’s a big kid. Honestly, Tom’s a big kid as well. You’d be shocked… as much as you guys see on TV and as locked in as he is on game day and he’s the same way at practice, he’s such a big kid. Outside of practice his personality really shines. Both of theirs.

“Tom expects greatness and being the greatest of all time, in my opinion, that expectation is there as it was for Kobe Bryant, as it was for Michael Jordan, if you saw the documentary. I believe those same attributes shine through for any great player and when you’re a great player you demand greatness around you.”

Along the way Mitchell, 28, began exploring all his options in football – including a return to Canada. It’s believed at least eight CFL teams had contacted him before he signed with the Bombers after the club put a full-court press on him with phone calls and texts from coaches and players to sell him on the organization.

“Those things showed me that this is a place people want to be and this is a team people want to play for. And as family-oriented as it was, that stuck out. That’s really what the message was and it sold me, honestly.”

A well-spoken spiritual man, Mitchell also has a playful alter-ego. He’s a big fan of superheroes, with Batman being his favourite – so much so that in many photos he is sporting the iconic bat logo on a T-shirt or a bandana worn under his helmet.

We have added @_Bmitch16 to the championship squad! #ForTheW pic.twitter.com/SKlgEBMnLs

“They call me ‘Batman’,” said Mitchell. “The true story is I got it from my older brother. When we were young he was the Batman fan and I had to always be Robin, because he’s older than me. One day I told him I was no longer being Robin, I’m Batman. Ever since then I’ve really taken a liking to Batman.

“What really grew on me was the love and admiration Batman had for his people, the way that he took care of his people, the way that he wouldn’t kill anyone. He had a moral compass about him where he said, ‘Hey, I’m going to do everything I can to clean up these streets and everything it takes to help people, but I’m going to do it all in love.’ For me, being a Christian man, I believe a lot of those characteristics are Biblical. I just took a liking to him and the fact he has no super-powers really grew on me. He’s definitely my favourite superhero. I do have others, but he’s definitely the main one.”

Mitchell’s numbers in Edmonton in 19 games spread out over parts of three seasons were 97 receptions for 1,418 yards and six touchdowns. Asked what he thought he would be capable of doing with a full season under his belt, Mitchell said “We’re going to have to wait and see.”

He chuckled then, and when pressed if his numbers in ’18 were a preview, added:

“I think in 2018 when I was actually able to play we got a preview of what I believe I can do. If we averaged that out I believe I would have been No. 2 in the league that year right behind Duke (Williams) by 60 yards based on averages.

“I truly believe that given the opportunity I can be successful, especially with such a great team like this and a group of guys who are so humble and unselfish, from what I’ve seen. I think it’s going to be a great year and we’re going to have a lot of fun. As a community, as fans, I think you guys are going to be very pleased with the progress and with what we do.”