TORONTO — Labour Day holds a special meaning in the hearts of fans of the Canadian Football League. It’s the sign of a real pivot point in a season, where teams go from finding out who they are in the first half to pushing for a Grey Cup down the home stretch.

Players routinely say that Mark’s Labour Day Weekend is when it feels like the season truly gets underway, and there are three pivotal matchups that kick off the road to the playoffs.

On the latest episode of The Waggle presented by Sport Clips, Donnovan Bennett was joined by broadcast legends Bob Irving, Mark Stephen and Rick Zamperin to discuss Labour Day Weekend.

Episode 227: Hopping in the booth with legends of Labour Day broadcasting

There’s always debate as to which of the three rivalry games carries is the trademark matchup that defines Labour Day.

On the Sunday of Labour Day weekend, the Saskatchewan Roughriders and Winnipeg Blue Bombers meet up every year at Mosaic Stadium.

The first matchup between the two teams came in 1949, with the Roughriders taking the inaugural Labour Day Classic. Since then, it’s been the Green and White that has dominated the matchup, with 37 of the 55 matchups going to Saskatchewan.

“I think my favourite memory from Labour Day, Winnipeg at Saskatchewan is just the atmosphere surrounding the game,” Irving said. “I don’t like to fly, so I usually drive down to Regina and it’s about a five-hour drive, and the first thing you notice when heading down the highway is that the Bombers have set up little merchandise shops for people going to Regina for the game. You get there and everyone is wearing green and the people who live in Regina have their Rider jerseys on. Back in the 80s or 90s, you’d have maybe 3,000 or 4,000 Bombers fans that made the trek down to Regina.

“…Since the 70s, it’s been an annual tradition between these two teams. The whole atmosphere surrounding the game is what stands out to me and what I’m going to miss most when we don’t have it this year.

Over the past 15 years, the Roughriders have won 14 times, including a stretch of 11 straight victories from 2005-2015. Last season, they took home their third consecutive victory with a last-second walk-off field goal from Brett Lauther.

The matchup may be more exciting based off the two-week stretch that sees the teams compete on Labour Day before flipping the scene to IG Field for the annual Banjo Bowl game a week later. It’s a big two-week stretch that generally has big implications on the standings heading into the final stretch of a given season.

“A player that has only been with Winnipeg and Saskatchewan for a short period of time, if you ask them about Labour Day weekend and the game, they tell you they know that it’s about and that it’s an important rivalry game,” Irving said. “So even new players know full well what Labour Day means and how much it means to the fans.

The Saskatchewan-Manitoba rivalry may only be rivalled by two of the other inter-provincial rivalries that take place on Labour Day itself.

The early game between the Toronto Argonauts and Hamilton Tiger-Cats was played annually at the legendary Ivor Wynne Stadium up until 2012.

Both of the closely approximated Ontario squads have a different sort of mentality when it comes to their respective identities.

“I think for everyone, whether you’re on the sidelines or broadcasting the games in the press box or just a fan sitting in the stands, you can feel the us-versus-them if you’re a Ticats fan, or if you’re an Argos fan, you can feel the tension,” Zamperin said. “It’s blue-collar Hamilton with that grittiness and that toughness against that perceived white-collar Toronto, and that hatred really spills onto the field and I think the players really buy into that narrative.

“…This is a pivotal point in the year, they know that the weather’s going to be getting colder soon. They know that this is a division game this is an epic rivalry that spans decades, it’s an important one to the fans, and the players feel that and they’ve played some epic battles over the years.”

Zamerin also talked about the atmosphere at the stadium. He compared Ivor Wynne to Fenway Park in that the fans were right on top of the action, making it especially difficult on the Argos in enemy territory.

In the 2019 iteration, the Argos jumped out to an early lead before a massive second half from Ticats quarterback Dane Evans saw the hosts win their sixth straight Labour Day Classic. 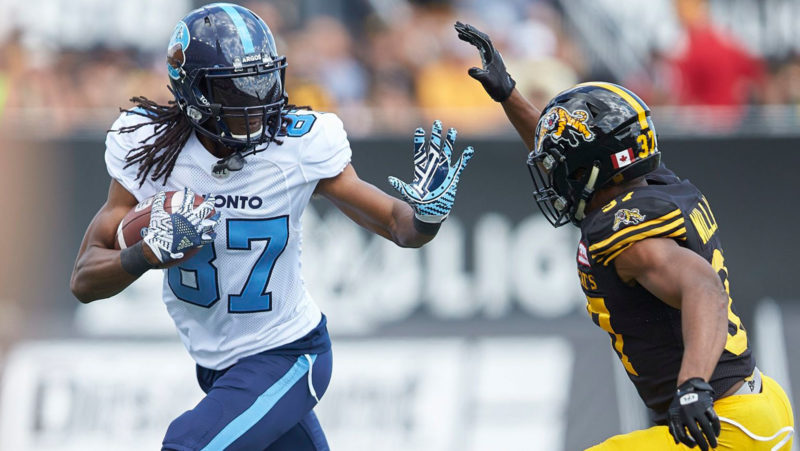 That game has routinely been followed by the other provincial rivalry on the docket between the Calgary Stampeders and the Edmonton Football Team.

With their recent run of success culminating in near-annual appearances in at least the Western Final, the Stampeders have snapped off eight consecutive victories on Labour Day.

“I’ve heard from many new players that it compares to the heated college rivalries at the NCAA schools they’ve played at,” Stephen said. “…Each team compares themselves to the other, and that goes back to the creation of the province when Edmonton was selected as the capital, which didn’t sit too well.

“It’s a longtime grudge where most provinces don’t have two cities of similar size and influence. And Alberta has two that go through hockey and all different sports, whether it’s university sports or other levels, in business and commerce and in politics. It’s all-encompassing and certainly one of the underlying stories that’s kind of a dominating feature in Alberta.”

Despite the game being in Calgary, the hostile road crowd hasn’t had a massive effect on Edmonton from the looks of things, as the two teams have split the all-time series, each taking home 29 victories while tying once in 1978.

2019 saw star pivot Bo Levi Mitchell return under centre for the Stampeders following multiple stints on the injured list with a pectoral injury. He helped his squad take home the win in front of the home faithful at McMahon Stadium.

For the Stamps, that was a pivotal victory, as Mitchell’s return marked a run at the West Division title — which ultimately came up just short — and another playoff berth for Calgary.

With the 2020 CFL season being cancelled, we won’t have the opportunity to celebrate the most exciting weekend on the CFL calendar outside of the Grey Cup.

Despite that, we’ll all be looking ahead to 2021 and what new memories may be created when the rivalries are renewed on Mark’s Labour Day Weekend.