TORONTO — With two off-seasons to process thanks to the pandemic-induced cancellation of the 2020 CFL season, it’s easy to forget just how much has changed for teams as they head into camps on July 10.

There may be no better example of an extreme before and after picture of a franchise in the CFL today than the one that the BC Lions present. The Lions will open their camp in Kamloops with change running throughout their organization.

“Well, I think you’d have to start with the head coach,” Giulio Caravatta, the colour analyst of the BC Lions and a former CFL quarterback himself, told Donnovan Bennett on this week’s edition of The Waggle.

Campbell came in as head coach after the Lions’ 5-13 finish in 2019. He replaced head coach and defensive coordinator DeVone Claybrooks, but would end up taking on more responsibilities with the Lions last summer after Ed Hervey resigned as GM. Campbell, along with longtime Lions exec Neil McEvoy, assumed GM duties together.

RELATED
» Ready for Kickoff: Previewing the 2021 CFL season
» A look at every team’s Off-Season Depth Chart
» This Is The Remix: New look Lions’ defence has to produce

“Clearly when you have a change like that at the top it’s a big deal. You get a new coach, new philosophy. I think that to me, is going to be the biggest change, to see how he runs his team.”

The advantage in bringing in Campbell, Caravatta said, is that he’s a proven entity in the CFL. He coached numerous positions as an assistant and had success in those roles before landing with the Ottawa REDBLACKS in 2014 as the club’s first-ever head coach. There, he took the expansion team out of the league’s cellar and to three Grey Cup game appearances, with a win in 2016.

“I think he’s going to be a really nice fit,” Caravatta said. “(The Lions) need that kind of stability. We’re so used to having Wally Buono as the lead figure out here and all the success that he had, bringing in a guy that had a lot of success is going to be important for this team.”

On the field Caravatta sees the Lions needing better play from their offensive and defensive lines. The Lions’ o-line gave up a league-worst 58 sacks in 2019 and their star free agent acquisition, Michael Reilly, suffered because of it. The Lions’ defence only managed 28 sacks, putting them at second-last in the league, just one sack ahead of Montreal.

“I think bringing in Kelly Bates (as o-line coach) halfway through the (2019 season) really, really changed that offensive line. I think the last six games of the year, they were very good and had really made a turn in the right direction. I think having Kelly there right from the get-go is going to be a great addition.” 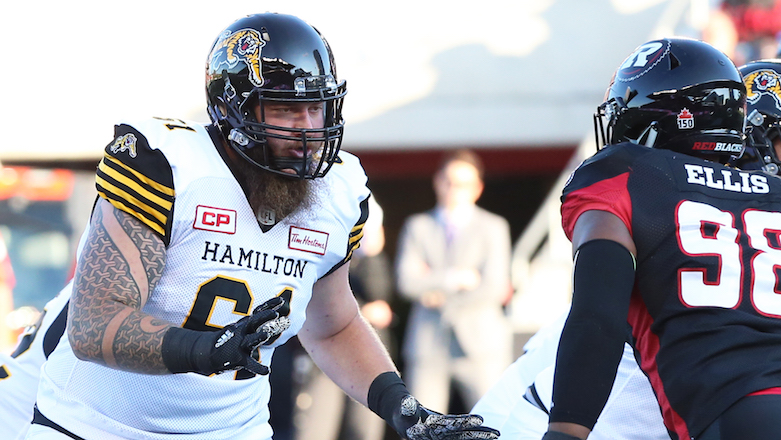 Right tackle Ryker Mathews was an important piece of a highly successful Ticats’ o-line in 2019. The BC Lions are hoping he’ll help keep Michael Reilly upright this season (Photo: The Canadian Press)

Getting strong play out of the offensive line early on in the season would make a big difference for any quarterback. Good protection out of the gate this season will let Reilly work at his best, knowing that he’d have time to make the plays he’s capable of making. That responsibility will fall to offensive tackles Joel Figueora and 2020 free agent signing Ryker Mathews.

With a reshaped front office and a new head coach, not to mention two years’ worth of free agency acquisitions, departures and draft classes, the Lions will have questions to answer when they come out of their camp in Kamloops. That they’ll go out into a West Division that’s always competitive and face an East Division that’s shaping up to be better than it’s been in years could make for a daunting task. Caravatta doesn’t necessarily see it that way.

“It’s not going to be easy. There are a lot of really good teams that have a lot of good players coming back,” he said. “There are a lot of what-ifs, but I always look at the main players. When you have the difference makers in key positions and when you have a quarterback like Mike Reilly, you’ve got a chance every single week, if you protect him.