Quarterback Michael Reilly had a very up close and personal look at the struggles the BC Lions’ offensive line experienced in 2019.

Reilly took a pounding some nights as the Lions gave up a rib-bruising 58 sacks the last season they played. You could excuse the 36-year-old veteran if he felt some apprehension going into this season, but after a few days of training camp Reilly actually feels excitement.

“Before we even stepped foot on the field, I was filled with a lot of confidence with what we were going to be able to do this year,” Reilly said. “But after (the first full-speed practice) I thought those guys performed extremely well.

“You can tell the communication and confidence in them as a group is very high. With those guys up front, they’ve got to work together as one group. They are five guys but really one unit. They have to go and play with confidence in themselves and in each other.”

Sukh Chungh, the 315-pound Port Coquitlam, BC, native who signed as a free agent with the Lions in 2019, said the returning players are using the last season as motivation.

“We learned a lot from 2019,” said the 29-year-old guard, who was limited to just eight games due to various injuries. “We hope to use that like a chip on our shoulder.

“This is a new year. It’s another opportunity to showcase our talents. The last time we left the field we had a bitter taste in our mouth. We’re trying to prove to ourselves and our teammates we have a higher standard to live up too.”

RELATED
» Ready for Kickoff: Previewing the 2021 CFL season
» Lions release 18, including QB Will Arndt
» Reilly soldiers through camp with a heavy heart 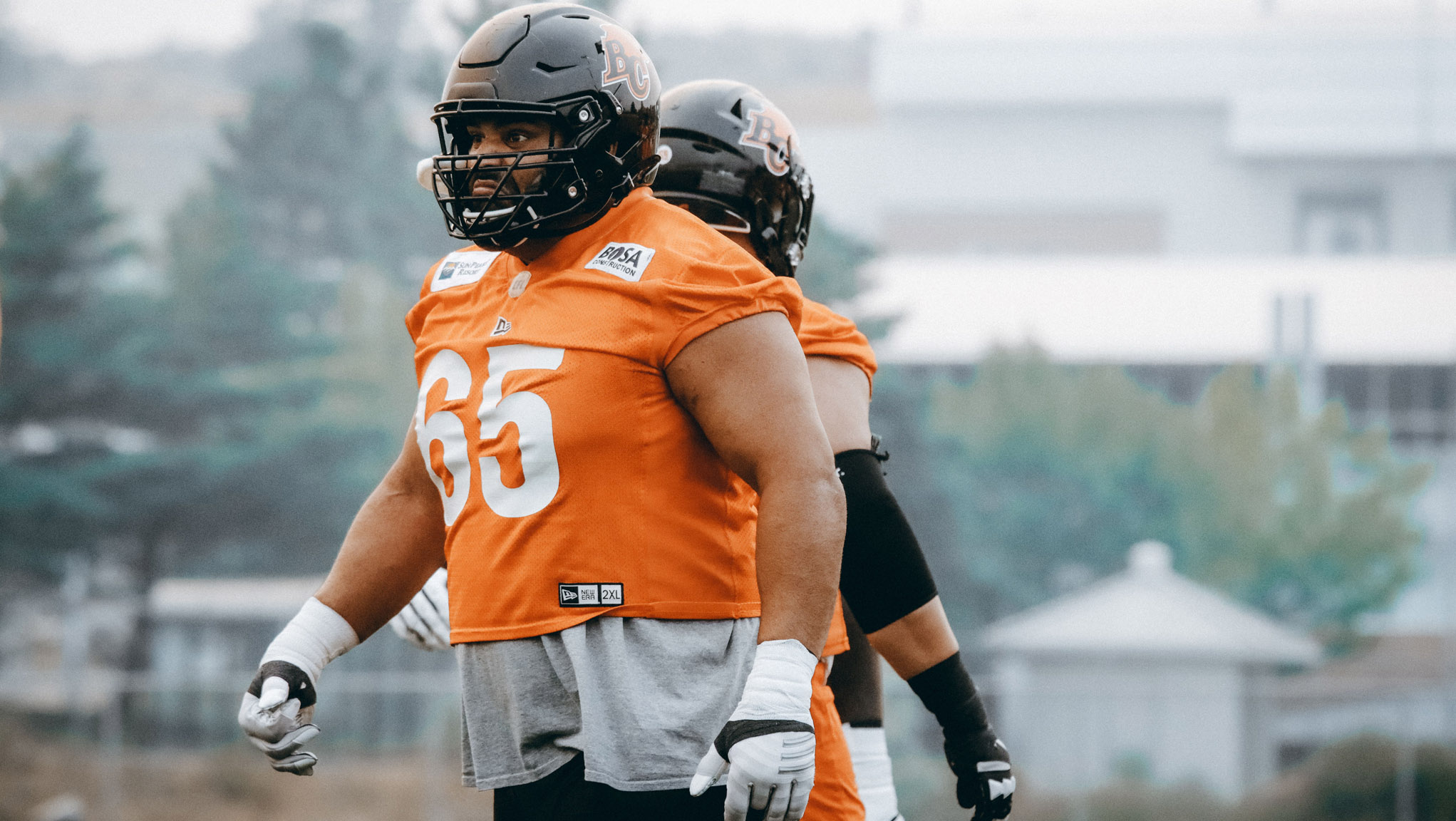 Sukh Chungh wants to put a frustrating 2019 season behind him as the Lions embark on their 2021 campaign (Photo: BCLions.com)

Problems with the offence line created a chain reaction that saw the Lions finish with a 3-15 record. BC was seventh in the league in offensive points (21.7 a game), eighth in net offence (328.8 yards a game) and fifth in rushing yards (98.9 a game).

Reilly, who signed as free agent in 2019, had his worst statistical season since 2015. He started 16 games before suffering a broken wrist that sidelined him for the final two games, and completed 322 of 463 passes for 3,897 yards, 20 touchdowns and 15 interceptions.

Even before the season ended the offensive line was showing signs of improvement.

The Lions responded by allowing 15 sacks in the final eight games.

Chungh said Bates brought new energy to the unit by being able to communicate with the players.

“Kelly takes a lot of pride in what he does,” said Chungh. “Working with coach Bates has been awesome because of his passion for the game.

“We’re just all trying to buy into his ways.”

Bates gives the players credit for tuning him in instead of dialing him out.

“It’s a good group of guys,” he said. “They have a great work ethic. They really hold each other accountable.

The offensive line will have a different look when the Lions open the CFL season Aug. 6 in Saskatchewan.

Brett Boyko, Justin Renfrew and David Foucault are all gone.

BC signed free agent tackle Ryker Mathews to play beside Chungh. Last year Matthews played on a Hamilton o-line that gave up just 37 sacks and averaged a league-leading 28.2 points a game.

It’s only training camp but Mathews had found the transition to a new team seamless.

“A lot of the core group is back,” said the 320-pound Brigham Young product. “It’s a lot easier since they are all comfortable with each other for me to kind of fit in a little bit better.

Also returning are Joel Figueroa, the Lions nominee as outstanding lineman in 2019; Hunter Steward, who played both centre and guard in the last season and Peter Godber, the Lions’ 2018 first-round pick, who has battled through injuries.

The 315-pound Steward has battled through a rash of injuries to play 75 games since the Lions picked him sixth overall in the 2013 draft.

Bates said the 29-year-old Calgary native has the potential to be an all-star.

“He’s a leader both on and off the field,” he said. “We expect him to fill that role.”

“From Day 1 we have the same guys,” said the 320-pound Miami native. “It’s a tight group we have here. It’s been a long time coming.

“Everyone is excited to go. We have a lot of leadership, a lot of veterans. It’s a recipe for success.”

The hiring of Jordan Maksymic as BC’s offensive coordinator will bring new ideas about schemes and blocking.

“It’s the entire offence working together but it’s also schemes, the plays you’re calling and me executing the offence as well as quarterback.”

Looking at the people paid to protect him Reilly feels very comfortable.

“All these guys are physically capable of playing at this level,” he said.

“I think we have some really good schemes. I think these guys are comfortable with each other. I’m very excited about what these guys can do, and I think they’re going to have a great year.”