The last man selected in the 2022 CFL draft didn’t see his name, at first, when it popped up on the draft tracker Tuesday night. He was too busy plotting his next move.

The selection process had been methodically unfolding for hours and as things were winding down during the eighth and final round, Konner Burtenshaw was no longer hitting ‘refresh’ on his computer. He was, instead, pacing the room and wondering what he’d have to do next in order to keep his dream of playing pro football alive.

“I felt my mind starting to race a little bit,” the 26-year-old fullback says, admitting that his hopes of being selected had been pretty well extinguished at that point. What was he thinking about?

“What the next steps would be if I didn’t get drafted.” 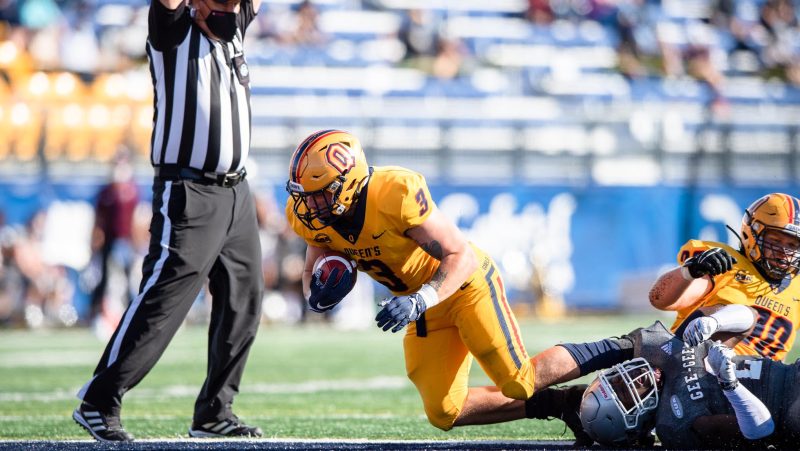 But just when it seemed like it was all over, Burtenshaw’s girlfriend, Abby, screamed and called him over to the computer. With the 74th and final pick of the draft, the Winnipeg Blue Bombers had chosen the
Queen’s Gaels grad.

“It was really nice seeing my name up there,” Burtenshaw says, proudly.

Over the last few weeks and months, we’ve gotten to see a lot of information about so many of the top prospects in this year’s CFL draft and good on them, because they’ve earned that.

But all those stories have been told. This one, a story for the less-heralded, has not been told so much. They also deserve some attention. Konner Burtenshaw, a work boots and lunch bucket football player who’s been grinding it out on his university team’s kick cover squads for four seasons, the final pick in Tuesday night’s draft, is a poster boy for those who’ve been flying under the radar but hoping that someone, somewhere in the CFL, will take notice.

Things are moving at kind of a frenetic pace when Burtenshaw pauses to talk a little about what’s coming. “I’ve gotta be in Winnipeg in five days,” he says, energetically, the glow of the previous night’s
excitement still brightly lighting his demeanor. Some of that excitement included a call from Winnipeg Head Coach, Mike O’Shea, who welcomed the last player selected to the Bombers’ organization, offering up some words of praise and encouragement. That’s something that has Burtenshaw even more fired up as his first pro camp gets closer.

Just before we have our conversation, I clicked ‘play’ on Burtenshaw’s YouTube highlight video to acquaint myself with him a little bit. I was only about 20 or 30 seconds into it before I thought “Oh, I know why Mike O’Shea likes this guy.”

That’s because Burtenshaw’s enthusiasm for special teams missions was clearly on display.

Then, about 2:10 into the reel, I see Burtenshaw hustling downfield on kick coverage against the University of Toronto.

He takes on one blocker, then quickly another. Each of those blockers appears quite unhappy about the zest with which Burtenshaw has undertaken his role. As the play ends, they come at him. He shoves them both away with a little more of that zest, one right after the other.

“Oh, now I REALLY know why Mike O’Shea likes this guy,” I muttered to myself.

I point out to Burtenshaw that his highlight tape has me thinking that he is O’Shea’s kind of guy. He laughs. “I’ve heard that a couple times now,” he says.

O’Shea is famous in football for so many things, of course, but one of them is definitely his great love of special teams and the physical maelstrom through which players need to navigate — or force their way
through — on every kick. O’Shea had 169 career special teams tackles, himself, and he can get positively gleeful when talking about the controlled mayhem of football’s down and dirtiest discipline. When I mention that to Burtenshaw, his reply has me believing that his new head coach will love him even more when he gets to know him.

“It’s almost medieval,” says Burtenshaw (who ought to know since he majored in history at Queen’s). “When you’re running down the field at kickoff, you kind of think of it like you’re charging a battle line.
It’s crazy. When you step onto that field, it’s all business and you can go out there and you can smack some bodies around. It’s part of the game and it’s awesome.”

Going to high school in Odessa Township, just west of Kingston, ON, Burtenshaw didn’t perform on special teams, really, at all. But he did just about everything else for the Ernestown Eagles. He played
quarterback, running back and linebacker on a team that he says had just “20 or 21” players on its roster.

At Queen’s, the special teams play came and Burtenshaw took to it. For four seasons he worked on that particular craft, with offensive touches being generally scarce. Over his final two seasons with the Gaels, the five-foot-10, 220 pounder did see a little more action as a backfield battering ram, particularly in goal line situations. “I got myself a few touchdowns,” he says.

Burtenshaw’s work ethic and dedication are well-known throughout the Queen’s football community. Three times he was named the Gaels’ special teams player of the year, and he was made a captain in a vote by his teammates. 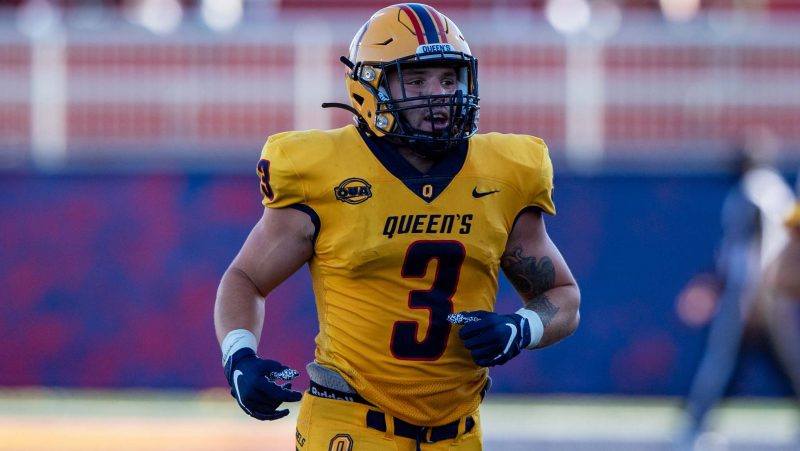 “He’s not a very outgoing ‘rah-rah-rah’ guy at all. He’s respected because of his physical presence, his toughness, and because of his work ethic and his commitment to our standard.”

“He’s had an instrumental role as, essentially, our most reliable special teams player, and a guy that’s played all over the field on specials making an impact for a number of years,” adds Snyder. “And he’s
become one of the most dominant special teams players in the league.”

Even if someone like Burtenshaw is a well-known and valued commodity at his school, it’s tough for players without a gaudy stats pack to grab an outsider’s attention as the combine season plays out. Some won’t get the chance, never seeing an invitation to even a regional combine. Burtenshaw considers himself fortunate that he got a shot at the East Regional in Baie-D’Urfe, QC, in March.

“When I got my name pulled for that combine I kind of realized it was my opportunity to get some eyes on,” he says. “It was hard for me being only a special teams guy because I’m not getting 30, 40 snaps at
running back or fullback. I’m only getting a few snaps here and there on punt and kick-off (cover), punt return, kickoff return.”

Although Burtenshaw did not then receive an invitation to the national combine, his regional appearance likely helped to get him drafted. “I’m just happy that someone spotted me, you know?”

Now, he’s a Winnipeg Blue Bomber and is about to get some lessons in special teams play from not only O’Shea, but from the CFL’s all-time leader in special teams tackles (210), Mike Miller, who is entering his 11th season in the pros. Miller, I should remind you, wasn’t drafted at all at the beginning of his CFL career, making the grade at Edmonton’s training camp as a free agent in 2011.

“I’m excited to learn from a couple of the best,” says Burtenshaw of the opportunity ahead of him. He knows of Miller’s long-standing importance and production and is aspirational when he talks about what the veteran stalwart has been providing for so long. “That’s a role that I want to play,” he says.

“I think Winnipeg is gonna be a perfect fit,” says the native of Amherstview, ON, optimistically.

“He (O’Shea) respects and understands a Canadian player’s role in the game and especially my role in the game as mainly a special teams guy. I think it’s gonna be a great atmosphere, a great team to be a part of.”

If the Bombers feel like giving him a look in the backfield while camp is on, Burtenshaw is up to it. “I think my biggest impact will be on special teams,” he says, “cover teams specifically. But I would never
say no to the opportunity at fullback or running back. And I would do my best to get there as well.”

As he has been doing through the entire process, it seems, just like so many unsung prospects have done time and time again over the years.

Burtenshaw was a whisker away from not seeing his name on that draft board at all on Tuesday night and he knows there are others who did not escape that disappointment. He has a message for them.

“The thoughts that were running through my head as the draft was dwindling down was just ‘What are my next steps from here? How does free agency work? How do I figure that out?’ I hope those guys are thinking the same way. And I hope they’re still getting after it and they’re not discouraged.”

“It doesn’t matter if you’re drafted first overall or last,” says the final man taken in the 2022 CFL draft.

“All it is is an opportunity to prove yourself as a football player and that’s all we need.”