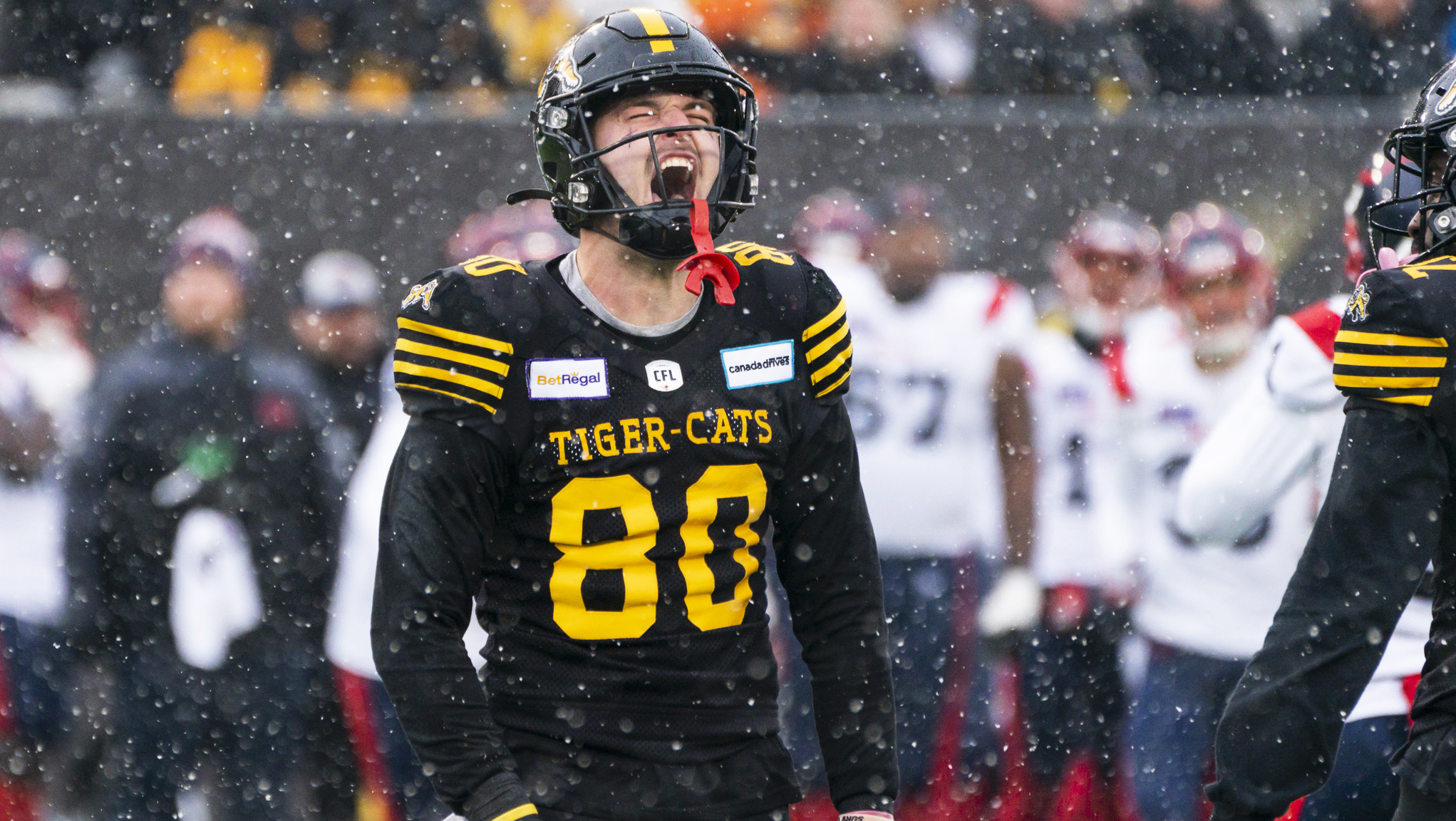 Hello, offensive coordinators. I can help you shave – by a full thirty-three per cent – your workload when it comes to installing a run game against Hamilton. Micah Johnson is joining Ted Laurent and Dylan Wynn at defensive tackle for the Ticats, so, say goodbye to the ‘A’ gap.

You’re very welcome. You can e-transfer me whatever amount you deem fair as payment for that service. I’d accept cryptocurrency as well. I think. That’s, like, a gift card or something, right?

They added a big name from someone else’s roster. Someone who made you go ‘hot damn!’ They shored up a necessary area of weakness with a couple of crafty gets as well. And held on to some stars and go-getters who were already on the roster. Your team is the envy of the rest of the league. Pull your jersey on and walk around in public hoping someone will stop you to ask ‘how they looking this year?’ so that you can brag ceaselessly and end off with a fist bump, parting with a cheery ‘is it June, yet?’

Once in awhile, over the next few weeks, you’ll spontaneously giggle at the thought of the mayhem your team is gonna unleash in 2022. Your team won free agency. Enjoy.

BONUS TAKEAWAY: Your team lost free agency. How come that stud went to your arch rival instead of to you guys? How come they didn’t land the guy you absolutely knew that they had to have? How could they let that cornerstone guy walk away from your team? Your team lost free agency. Keep your jersey folded up in a drawer until you can focus attention on the draft, hoping that turns out better for ya.

BONUS BONUS TAKEAWAY: Who won free agency? Tune in on November 20 to find out.

YOU WON’T EVEN RECOGNIZE THE PLACE

You know what would have been fun?

It would’ve been fun if the Ottawa REDBLACKS had asked one die-hard fan to agree to completely unplug from the outside world for the entirety of the free agency period, right from the opening of the negotiation window, until last night.

Occasionally, the REDBLACKS would leak in some potentially bad news. Like “the Edmonton Elks have made a big offer to Jeremiah Masoli, so….”

Then, they could have led that diehard fan into a room where, projected on the wall in big, bold letters, were the names of all the goodies bought during free agency. William Powell. Jaelon Acklin. Darvin Adams. Kwaku Boateng. Ucambre Williams. Patrick Levels. Money Hunter. And on and on. Those names would be read, by an unseen narrator. At the end of the list – or it would seem to be the end – a door would open, and the narrator would walk in. “And, me, Jeremiah Masoli,” he’d say as his name is added to the list.

I mean, we see people absolutely lose their minds on renovation shows when they walk in and see that their kitchen has a new backsplash or whatever. They’re in tears over a re-purposed barnyard dining room table.

This REDBLACKS’ reveal would have been epic. Bloody epic.

Long story short; The REDBLACKS will be stepping up in 2022.

John Hufnagel, I think, enjoys watching everybody else scramble during free agency. I get a mental picture of him in his office, enjoying a nice, strong cup of coffee. And nibbling on a lovely cheese danish plucked from the tray of pastries parked on a side table a few feet from his desk.

Casually, he puts his feet up on that desk of his, picks up his phone and starts making calls to the agents of players we’ve never even heard of but who will be stars six months from now.

That’s why the GM could appear so relaxed during a pre-free agency media conference where he declared the Stamps wouldn’t really be setting off any fireworks when FA day hit.

John Hufnagel knows where to get new guys. Always.

Grab another coffee, Huf. Watch everybody else dance.

THE LIONS ARE BIDDING TO BE CANADA’S TEAM

The BC Lions made a few statements during free agency. Big ones.

None bigger than the addition of little used quarterback Michael O’Connor, who’ll slide in behind fellow Canadian Nathan Rourke on the Lions’ depth chart.

No one of my vintage can remember when a CFL team had a one-two Canadian punch at quarterback, though there is no guarantee O’Connor ends up as the back-up on game day, especially since the Lions also signed former Roughrider Isaac Harker for the QB room. However, there is a pretty clear indication from Vancouver that O’Connor will finally get a real shot at meaningful football, something some of us have been eager to see dating back to his time with Toronto. Some of you, I recognize, have been eager to see that since even before that.

“While I do think that it’s a cool thing that it is two Canadian quarterbacks, the primary motivation was to find the best combination that’s gonna help our football team win,” said BC head coach Rick Campbell.

What’s your favourite Canadian thing with a West Coast flavour these days? With a Captain Canada attitude at the quarterback position, the BC Lions may have out-Canadianed even the legendary Nanaimo bar.

THERE ARE NO SURPRISES. WAIT, WHAT?

I like the negotiation window in free agency. It means we can spread out the news, even if some of it is not quite official, until it does become official on FA day. Sometimes, a team even grants a player early release so we can get definitive word ahead of time. We get our personnel news in morsels, rather than being force-fed announcement after announcement as soon as the deadline bell goes ‘bong.’

And still, with that very civilized way of going about the business, there is plenty of intrigue left over. For every Ja’Gared Davis, there is a Darvin Adams, or a Darnell Sankey.

And room for the odd earthquake, too.

Andrew Harris to the Toronto Argonauts is proof of that. Who among us didn’t lean in and audibly blurt out ‘whaaaat?’ when we first saw that news. You may have felt Harris was not going to re-sign with Winnipeg, based on comments made by Winnipeg general manager Kyle Walters.

But, wasn’t there just a shred of possibility that the two sides would come to an agreement to keep Mr. Winnipeg in blue and gold? Even if you did not wonder about that, you can’t expect me to believe you had Harris going to the Argos.

Shock and awe, that one was.

Now we’re left to wonder: what exactly is the plan for Harris in Toronto? He’ll soon be 35 and that is not an age where we conventionally believe a running back is at his peak. Harris will bring to Toronto his famously robust taste for competition and that will be a boon for the double blue. But can they really expect him to go full load at this point? Or do they evenly rotate Harris and DJ Foster? Does Toronto now go on a spree to beef up their Canadian running back talent behind Harris?

Not sure. What I do feel reasonably sure of are two things: 1. Harris still feels the fire and he has his sights set on 10,000 career rushing yards (he’s 339 away). 2. When he does finally retire, he’ll be signing a one-day contract to do that as a Blue Bomber.

AND FINALLY… Want to know how to write a ‘thank you’ note? Look at DaShaun Amos’ Letter To Calgary on Twitter.