It is quite possible that most CFL Draft prospects would prefer to be put through six hours of one-on-ones or be forced to do the three-cone drill a hundred times in a row rather than be put through the one thing that so many of us dread.

They’d better take it seriously, though, because the interview process is an important one for CFL coaches, general managers and other assorted personnel people, giving them something they have not seen from a prospect no matter how studious they have been in compiling information on a possible draft day target. They’ve got video. They’ve got statistics packages. They’ve got opinions of scouts. What they don’t have, though, is a first hand impression of who the prospect really is.

“You’re not just drafting the player, you’re drafting the person,” said Toronto Argonauts Assistant General Manager Vince Magri. “Getting to know what kind of person he is, how he learns, what makes him tick. And that goes a long way in painting the more complete picture of the prospect before you get into the draft.”

“It’s another avenue to get to know these guys to see what type of individual you’re investing in,” said BC Lions’ Co-General Manager and Director of Football Operations Neil McEvoy, stressing the importance of the interview process. “You’re going to invest in them for the next three years – hopefully longer – in trying to make your football team better than it was the day before.”

The player interviews are really the only thing that fans will not get quantified when more than fifty prospects gather for the 2022 CFL Combine presented by New Era, this weekend in Toronto. You can measure a guy’s height and his weight. His bench press abilities. His speed. His off-the-mark explosiveness. Fans can also witness these athletic feats by catching a livestream on their laptop and they can see the numbers added as they are posted on this website.

The interviews, though? Those are private and behind closed doors and they stay between the player and the team. That is a big reason why the process is so intriguing to so many, shrouded in mystery as it is. Not much gets out about these confabs.

And while the level of importance of those chat session performances ranges from team to team, manager to manager, the three personnel men I spoke with all agreed that a prospect interview is kind of a big deal, and that a draft-eligible player’s stock can rise or fall depending on how they come across to a team’s braintrust. They all agree, too, that it’s in their best interest to aid a young man in feeling as comfortable as possible within the process, and that the curveball questions that have come to be a part of the comical lore of the prospect interview are not all that necessary nor prevalent.

Prospect interviews have been going on for years, now, evolving from casual chats in a Friday night buffet line to what is now a formal parade of eager amateurs sitting down for conversations with a half dozen or so inquisitors in each team’s hotel suite. Each team will speak with around twenty players face to face and some of those players might actually – gulp – have to sit down with each and every club.

Saskatchewan Roughriders’ Vice President of Football Operations & General Manager Jeremy O’Day didn’t have to go through the interview process back when he was an up and coming offensive lineman, going on to become a three-time CFL All-Star and a three-time Grey Cup champion. He wasn’t at a combine in 1997, being taken by the Argos in that year’s supplemental draft instead. So he doesn’t have first hand knowledge of what it’s like to be on that hot seat. Nevertheless, he has compassion for those who put on a jacket and tie and run the gauntlet from team suite to team suite.

“I know that it can be a little bit daunting when you walk into a room and there’s six or seven staff members from a team and then you’re constantly going from one to the other,” O’Day said.

For that reason, the Roughriders’ interview room will be one where each prospect will face what O’Day thinks is a little different atmosphere than what the other teams might have to present.

McEvoy, who is entering his 27th season with the Lions, has been a part of hundreds of these player interviews. For him, they are an important evaluation tool. Football talent is the thing, certainly. But it is not the only thing when trying to assess how a player might fit in with a pro team’s culture.

“That’s the way professional sports is,” said McEvoy. “You’re judged on and off the field, especially nowadays. We have high expectations for these guys that we’re gonna invest our time and energy into.”

“If you’re gonna have a negative impact during the interview, you’re gonna have to be really, really special on the field,” McEvoy added. “Because this business is really tough when everyone is happy and everyone is doing well. You don’t need to add a rotten egg to your club to disrupt it. So, we try not to do that.”

Magri believes in player evaluation interviews so much that he rates them, along with a player’s physical exam, as the two most important aspects of a combine performance. Part of the reason for that, he says, is that the Argos will already have a ton of information on a player’s abilities prior to the combine, meaning that the drills and one-on-ones are not as likely to be as eye-opening, not as likely to add to a store of knowledge about the player.

“It’s really the one thing that you can’t really gauge on on film or at a game or at a practice,” Magri said of a potential Argo’s personality. 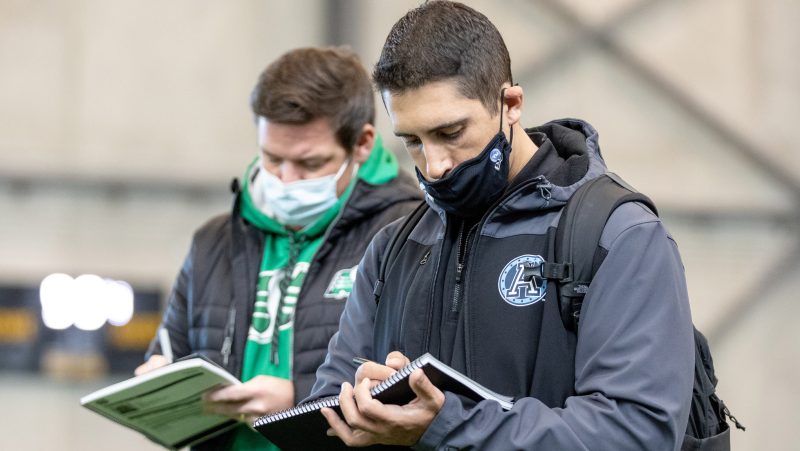 Over the years there have been stories about some teams asking oddball questions of their prospects. One story that O’Day remembers tells of a team plunking a box of assorted donuts down on a table and asking confounded young players which of those donuts they saw themselves as.

But none of Magri, O’Day nor McEvoy entertain such tactics. An amused O’Day can’t see the point of it, personally. “Maybe (it’s) just trying to get the kid to think and be creative,” he said in wonder. “I’m not I’m not sure why why they’d ask those questions.”

Though the Argos will not be a team to launch a weirdo, out-of-the-box question at a prospect, Magri does understand why some player personnel people might like the tactic, admitting to being curious about the methodology and what some might see it as accomplishing.

“Asking everybody the same outlandish question, you can kind of compare all the different answers,” he reasoned. “Same way you compare the 40 times. It’s another column of data that you can compare across a large group of people.”

Just because understands the concept, however, doesn’t mean Magri is convinced it’s a metric he needs in assessing a possible Argonaut.

“They’re people,” Magri said. “They’re not robots, they’re not spreadsheets. We just want to make sure we’re comfortable with the player that we could potentially be drafting and bringing into our organization and trying to win football games.”

“We just try to get the player to be as authentic as possible,” added Magri, explaining that the Argos’ strategy in the interview suite will be one that employs a relaxed atmosphere.

McEvoy – and Magri and O’Day echoed the sentiment – doesn’t feel that with the short amount of time teams get to spend with each player (12-15 minutes) that there’s any need for the Lions to screw around with questions like “if you were a tree what kind of tree would you be?”

“Getting down to the nitty-gritty is what we try to do,” he said. “Not throw them for a loop.”

“I want these guys to succeed,” McEvoy continued. “Not that our interviews are fun but, to be quite honest, we’re pretty low maintenance. We’re just trying to get to know these guys as much as we can and I just don’t feel that putting them in a situation that’s unfair or uncomfortable is something we’re going to do.”

“Relax and be honest,” O’Day said, offering advice for what can be a nerve-racking experience for anyone, not just a football player. “Don’t just give the answer that you think the team wants. Because sometimes that ends up being a bad bet if you’re not being honest.”

While Magri, McEvoy and O’Day will do their level best to provide their potential new players with a welcoming atmosphere, they all agree that a player should not take that as an invitation to mail it in during their interview. All have seen a young man’s stock rise or fall in these sessions. 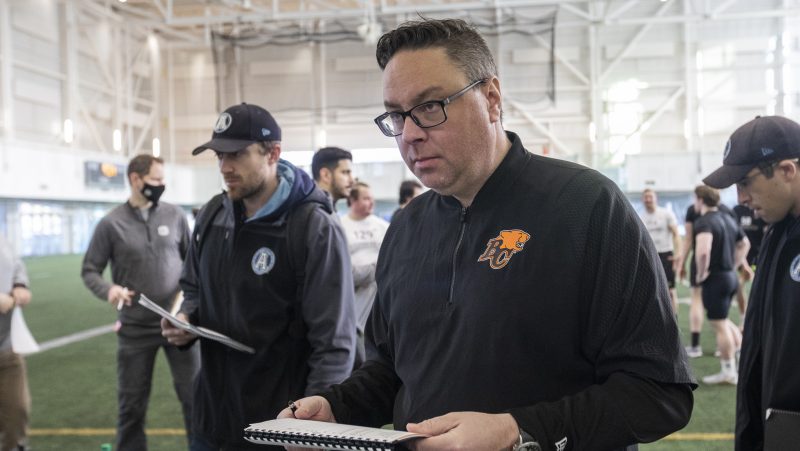 Neil McEvoy looks on at the Western Regional Combine in Edmonton earlier this month (Amber Bracken/CFL.ca)

“With us – and I can almost guarantee you every team – there’s been at least one on opposite ends of the spectrum,” said Magri.

“For us, in the past it has dropped players pretty substantially,” said O’Day. “And then by the same same token they can raise their value as well because we feel like they’re just high character and they really fit with what we’re asking them.”

What he’ll not be asking them is what kind of donut they see themselves as.

Uh, maybe be ready for that one anyway. Just in case.

DRESS FOR THE JOB YOU WANT

According to BC Lions Co-General Manager Neil McEvoy, receiver Jason Clermont changed everything back in 2002.

The University of Regina receiver, who would go on to be drafted fourth overall by the Lions that year, stood out in a sea of track pants and t-shirts when the time for prospect interviews came.

“Jason Clermont came in in a suit and tie and really impressed everyone,” said McEvoy. “That’s the guy who set the bar for everyone, saying ‘hey this is a job interview.’ If you’re gonna just show up in flip-flops and shorts, well maybe that’s the type of mentality you have.”

Clermont, who was named the Rookie of the Year in 2002 and went on to play ten seasons in the CFL, remembers wanting to stand out somehow.

“I wanted to make an impression,” said Clermont, now a real estate executive in Regina. “I wanted to let them know I was there on business.”

Does he remember the suit?

“Well, I mean, I was from North Regina,” he laughed. “So I had one suit. And it was black. And I’m gonna guess it was a blue, striped tie. Because that was pretty much the only tie I had, as well.”

It was enough to turn some heads and set a precedent.

“Since then guys have worn a suit and tie all the time,” said McEvoy.