James Johnson sure had a hell of a night that night.

Three interceptions he had, in the 2007 Grey Cup game. One of them for a pick-six.

Yet it could have been even better. Shoulda been four, he says.

Johnson remembers the one that got away on that incredible evening, almost thirteen years ago. “I don’t know how I dropped that ball,” he says of a first quarter opportunity that he had right in his mitts. “It bounced right off my chest,” he laughs.

Quite a story, Johnson’s journey to being named Grey Cup MVP in Saskatchewan’s 23-19 win over the Winnipeg Blue Bombers. Might never have happened at all if he hadn’t asked for a pair of shoulder pads on a fateful junior college day, when one coach was likely about to cut him, but another was curious to see what, maybe, he could do at another position.

RELATED
» CFL to honour the best of the last decade
» CFL.ca writers weigh in on the ADT debate
» A statistical look at the ’07 Saskatchewan Roughriders

Years later, under the roof in Toronto, at the 95th Grey Cup Game, Johnson performed better than anyone else on the field, icing the win with his third interception of the game, with less than a minute to go. And he did it all that night with a torn ligament in his right thumb, too.

He remembers the game and the plays he made quite well and can add a little detail to how each unfolded. Remembers the blown plays too, which don’t get as much attention, of course, considering how things turned out.

Saskatchewan’s Grey Cup hero is on the line from his home in Snellville, Georgia, where he resides with his wife of eighteen years, Angela, and five offspring ranging in ages from four to nineteen.

The eldest, daughter, Brianna, has a softball scholarship with Jackson State University. Then there are the high schoolers, 16-year-old Cierra and 14-year-old Desmond. Desmond has played some football, but not this year. Two young boys round out the family; Ethan is six and Jace is four.

Johnson does some coaching now and then, but family life is busy, especially when it’s coupled with a career as a distribution supervisor with a large employee-owned supermarket chain.

His Grey Cup ring sits polished and tucked away in a box, and he rarely wears it. There are a couple of reasons for that, really.

One is the same as the reason Johnson doesn’t talk too much about his record-setting championship performance; he feels that it has its place, proudly in the background, unless the situation warrants it. He doesn’t flaunt the accomplishment for the sake of grabbing some attention.

“I don’t tend to bring things up all the time,” he explains, “unless I’m in that environment, speaking to young athletes, trying to encourage someone who’s playing football.”

The other reason Johnson doesn’t wear the ring very often is a more practical one, one that has its roots in a detail that makes his great Grey Cup even more impressive.

Johnson wasn’t available to be sized for his Grey Cup ring, something that happened in the days that followed Saskatchewan’s win, because he had to get away after the big civic celebration in Regina, scheduled to have surgery on his thumb straight away.

He figures he injured that thumb as the playoffs were beginning that year. “I wanna say I did it in practice,” he says, trying to crystallize the memory. “I bent my thumb back pretty bad.”

For the Grey Cup Game, Johnson had that thumb taped up tightly, but he plays down the significance of that, admitting only that it was a minor hindrance.

“There was no pain in it, so that was fine,” he says. “It didn’t affect me mentally, anyway.”

Maybe that thumb was the reason he dropped what would have been his first interception of the game, who knows?

Didn’t bother him on the next three attempts, though.

The first pick served as a starting gun for the Roughriders, who trailed Winnipeg by a score of 7-nothing, and inside three minutes remaining in the first half. Reading the play from his corner position, Johnson accelerated to step in front of Winnipeg receiver Milt Stegall, who appeared open for a moment as he ran an out, with another Saskatchewan defender, Kitwana Jones in pursuit.

“Once I saw him coming out toward me, I was definitely going to go get it,” says Johnson remembering the play and crediting defensive coordinator Richie Hall for the proper scheming.

Rolling on the ground with the ball in his hands, Johnson sprung to his feet and negotiated the next thirty yards down the sideline to the end zone. The convert gave the Riders a tie game. Johnson’s big play gave them the jolt of caffeine they were looking for.

“I always felt I was good when I had the ball in my hands,” says Johnson. “Once I got on my feet, it was time to go.”

It was those abilities – being good with the ball in his hands – that led Johnson to attempt to win a junior college running back position when he was 21-years-old, even though he hadn’t played a down of high school football. In fact, he hadn’t taken part in any high school sports, but he knew that he had speed and moves, from playing pick-up with his friends.

With that in mind, he figured he could give running back a go at West Los Angeles College and was granted a tryout. But Johnson was hampered by his lack of structured football knowledge and also had three or four other running backs ahead of him on the depth chart. The running backs coach was not impressed.

“He didn’t wanna give me my pads,” remembers Johnson, who’d lined up like everyone else to get some shoulder pads at the end of the first run-through. “I never really got an opportunity to display what I could do.”

Not on offence, perhaps. But the head coach decided to give the kid with the blazing speed an opportunity on the other side of the ball, and ordered him over to the defensive backs group.

“After one day of practice, the defensive backs coach, he saw something,” remembers Johnson with a grateful tone in his voice. “I don’t know what it was.

“After that, I got my shoulder pads.” 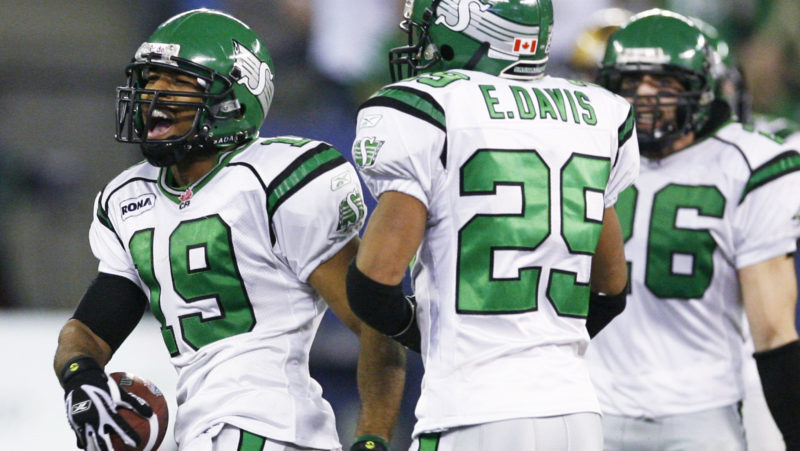 Johnson celebrates one of his three interceptions in the 95th Grey Cup (Dave Chidley/CFL.ca)

Johnson’t second interception in the 2007 Grey Cup Game showed off his abilities to get deep with speedy, seasoned receivers, as he tracked Stegall down the seam and darted underneath at the last moment, nabbing Dinwiddie’s under-thrown bomb.

It was a nice moment of redemption for Johnson. His first quarter drop had come on a play that was “similar to that,” he says, “where Milt was flying up the seam.”

It was the kind of play that had earned Johnson a longer look in junior college, years before.

“I had the speed to run with pretty much all the receivers,” Johnson says of his breakthrough at West Los Angeles, one that came after he’d ridden the bench for the first four or five games before being inserted into the line-up.

He intercepted a pass in his first West LA game, he says. And another one in his second. “It went uphill from there,” Johnson says.

Uphill to a scholarship with Arkansas State University, where he continued to learn the finer points of being a top-flight defensive back, adding technical knowledge and game smarts to his abilities.

Johnson’s third interception of the 2007 championship would show off his growth as a defensive back, the mental part of the game shining over the speedy physical side.

This was the interception that would extinguish the Blue Bombers’ hopes, as they scrimmaged at the Saskatchewan 46-yard-line, snapping the ball on second and one, and a minute to go. Winnipeg trailed by four.

“Man coverage,” remembers Johnson. “They kinda had run the same play back to back. And I was in position. I was just reading it the whole time.”

The play was a little inside curl by receiver Derick Armstrong. For a split second, Johnson thought he might have to abandon his post, as Dinwiddie appeared to have a running lane to the first down marker, coming straight at him.

“When he stepped up into the pocket,” recalls Johnson, “initially, I thought he was gonna run with it but then I thought that maybe he was gonna throw the ball late.”

The guy who was once denied shoulder pads at junior college would go on to become the biggest reason why a football-mad province would celebrate deep into the night on November 25th, 2007.

He may not talk about his memories of that dazzling game on a regular basis, but James Johnson knows where to find them, just like his oversized Grey Cup ring.

GREAT NIGHT. BUT THERE WAS THAT ONE MOMENT…

Yes, Derick Armstrong was the man Johnson snuck in front of in order to make his game-clinching interception in the 2007 Grey Cup.

But Armstrong did get the better of Johnson earlier in the game, on a 50-yard touchdown reception that would allow the Blue Bombers to take the lead in the third quarter.

With pressure forcing Ryan Dinwiddie out of the Winnipeg pocket, Johnson lost touch with Armstrong down the sideline for a split second, when he was caught peeking.

“Actually, I talked to Coach (Richie Hall) yesterday, and he had something to say about that play.”

“He said: ‘you was lookin’ in the backfield.’ And I said: ‘yeah, I definitely was.’ And that’s how he ended up getting behind me.”

As the ball landed in Armstrong’s hands, at around the five-yard line, Johnson was closing with his trademark speed, but it was too late.