Things are a little different for the Toronto Argonauts as the CFL’s free agency period looms.

Easier in some ways, with some 50 members of the team already under contract. Harder in one very particular way, though and general manager Michael Clemons knows it.

“It’s more difficult to go from good to great than it is from bad to good,” said Clemons, sizing up the steps ahead, which include a little front office fortifying and trying mightily to retain some roster consistency on a team that finished first in its division in 2021, though it fell short against the Hamilton Ticats in the Eastern Final.

The next month or so won’t be the same as it was during a similar period a year ago. When CFL free agency hits on Feb. 8, maybe you shouldn’t look for the same, garish talent collecting performance you witnessed from the Boatmen last February.

“Finishing where we did, you know, should make this off-season less turbulent,” said Clemons. 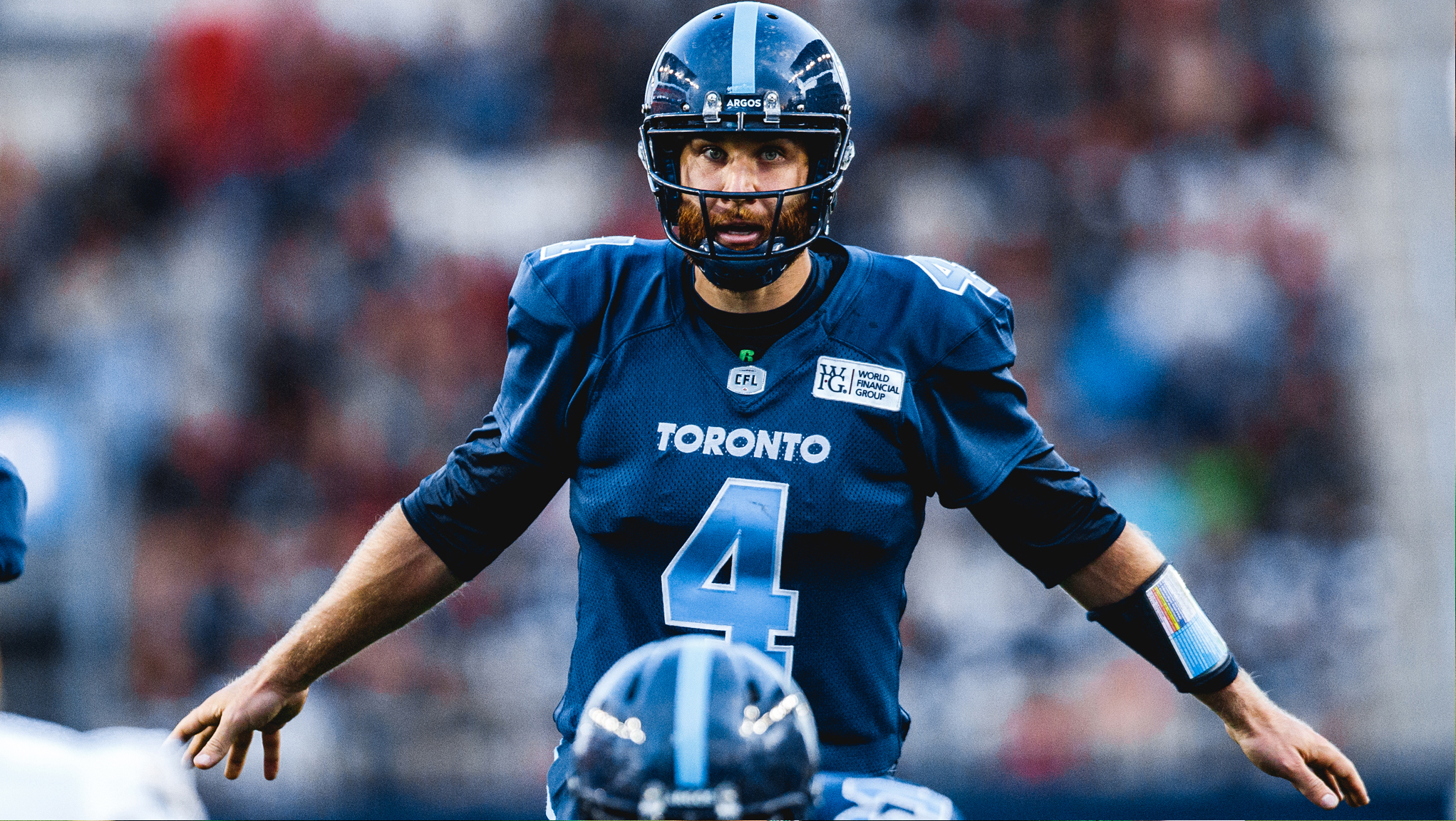 One of the Argos’ goals this off-season is to keep QB McLeod Bethel-Thompson from hitting the free agent market (Argonauts.ca)

Last year, the Argos were trying to go from bad to good, and so, they went all Will Ferrell in Anchorman with their FA performance.

“Cannonball!” they hollered as free agency opened up. And they just kept yelling it over and over and over. They’d kind of done the same thing the year before as well, signing a clutch of high profile free agents. But that was all forgotten as the Argos’ planned rebirth and turnaround would not come to be as the entire 2020 season was cancelled.

The Argonauts had very good reason to go on a spree, pilfering top quality talent that had proven itself with other teams. Clemons was aware of the failings of the two previous campaigns as he took over as general manager in the autumn of 2019. Consecutive 4-14 seasons called for more than tweaks and fresh paint. Everything needed to change.

Now, however, the team has a more solid foundation to work with, coming off nine wins in a 14-game season. If the Argos’ culture needed a swift and dramatic change, it got it. Now the GM aims to keep it in place.

“We do like our team,” said Clemons. “We like the players, the makeup, the leaders that we have. We’re very proud of that. We do understand that we need to get better, we need to grow.

“But we do like our guys. We are most concerned first with re-signing our guys,” he insisted.

While Clemons has managed to re-sign the likes of receiver DaVaris Daniels, kicker Boris Bede and offensive lineman Shane Richards, to name a few, there are a few more key names on the list of potential Argo free agents, so there is work to be done.

For instance, one of “our guys” for Clemons is quarterback McLeod Bethel-Thompson. Asked if he’d like to see McBeth back in Double Blue, Clemons says that no, he would not like it. He’d love it.

“We’re trying to work through that now,” said Clemons of contract negotiations with Bethel-Thompson. “He is the intended starting quarterback and he is a tremendous leader on our team.

“In today’s terms, he’s an influencer,” Clemons continued. “And so he influences a lot of good, a lot of the right things on our football team. And he’s continuing to grow in who he is as a Canadian Football League quarterback.”

“He is the intended starting quarterback and he is a tremendous leader on our team.”

The Argos have operated with a smaller football front office so far this winter, what with the end-of-season dismissal of John Murphy, the team’s vice-president of player personnel.

“We all have had to do more,” said Clemons of a front office that includes Vince Magri, the club’s director of scouting and Alex Russell, the manager of football operations. On that front, Clemons advises, the Argonauts will have news in the next week or so. “We’ll be adding some experience,” he said of the team’s football operations personnel.

If the Argos do end up making far fewer splashes in free agency this off-season, it will be partly due to them being more satisfied with the players they have, yes. But that will be just a portion of the equation.
There might not be as many big-name free agents out there this time, anyway, Clemons believes.

With so much general uncertainty out there these days due to the ongoing pandemic, many players could well decide they’d like to keep at least one thing consistent in their lives and that thing could be the band of brothers they already know.

“I think there is an almost endearing allegiance,” Clemons said, “that occurs during challenging times.”

More teams, Clemons believes, are going to be able to retain more of their big stars. “So you’re seeing that the the normal sort of free agent list is, is dwindling, I think, a little bit faster than normal,”
he said.

Certainly Clemons would like to see fewer potential Argos’ free agents make it to free agency on Feb. 8, after last year’s open market spree led to the GM collecting them in the first place, for good reasons.

If Clemons can successfully retain a large portion of the roster that helped the team turn its fortunes around in 2021, this free agency period will see the Argos merely dipping in a toe or two, in stark contrast to last year’s bombardment of deep end splashes.

“A first place finish in the East does that,” said Clemons with a laugh.