Recently, in talking with CFL fans, I’ve come to think that an awful lot of them believe it comes down to just one guy when voting for a quarterback in balloting for the All-Decade Team, presented by LeoVegas.

Maybe two. Can it really be that cut and dried, though?

Maybe, maybe not. I need more info, in order to decide.

I thought about interviewing some quarterbacks, or ex-quarterbacks, but in the end, I figured I would get some straight goods from a guy who is known for calling things the way he sees them, with the CFL on TSN panel. A guy who, sure, did not play quarterback himself, but who would nevertheless have all kinds of insight into what makes a good one tick, having snared 854 passes for 15,153 yards and a record 144 receiving touchdowns on his way to the hall of fame.

» CFL to honour the best of the last decade
» Vote Now: Quarterbacks
» Full list of nominees at each position
» ADT Voting schedule
» A statistical look at a handful of All-Decade QBs

We begin our conversation with the two names that float right to the top of the list when it comes to likely top vote getters at quarterback; Bo Levi Mitchell and Mike Reilly.

When it comes to Mitchell, the first thing that pops out in Stegall’s mind – as it does for many – is his record.

“That’s what they’re measured on,” says Stegall of quarterbacks. “Winning.”

I counter with an opinion I’ve held for a long time. That win-loss record and number of championships are overblown stats when it comes to the measure of a quarterback. Wins, I say to Stegall, are team stats. Grey Cups are won by teams, not individuals. Why, I wonder, do only quarterbacks get measured on this? Why don’t we talk about the win-loss record of a defensive tackle, or a receiver, when sizing them up?

“The majority of the time when you are winning,” Stegall counters, “you are putting up some good numbers.”

That’s certainly true of Mitchell, who is among the leaders in almost every category quantified on CFL.ca’s list of quarterback nominees, though he leads in just two. His 8.5 yards per pass attempt has him tied for first with Henry Burris and Jeremiah Masoli. But winning percentage? Way, way ahead of the competition, with an .804 mark.

Mitchell, Stegall says, has a confidence level that is just about peerless, and that helps him perform at a high level week in and week out, no matter the circumstance.

“He thinks when he walks on the field, he’s the best thing out there and you can’t do anything to stop him,” Stegall explains. “A lot of people will say that, but won’t believe that. He actually believes that.”

When I shift the conversation to Mike Reilly, Stegall agrees that the BC quarterback should be considered just as seriously for the All-Decade honour as Mitchell. “His numbers were crazy,” Stegall notes.

Reilly topped the charts in a number of categories over the course of the decade, including passing yards (31,522) and number of 300 yard passing games (48).

Mike Reilly has become known as the toughest player in the league over his career (Geoff Robins/CFL.ca)

There’s more to Reilly’s story, though, and Stegall has seen what we all have seen in Reilly over the past ten years.

“His toughness is second to none,” Stegall says. “When you see the most important person within your organization sacrificing – sometimes too much, in my opinion – his well-being, for the betterment of the team, the players feed off that.”

“Mike Reilly is right there at the top.”

So is a recently-retired veteran who battled through a litany of injuries to help Toronto to two Grey Cup wins during the decade. For Stegall, Ricky Ray shouldn’t be merely an afterthought in the discussion, simply because his playing time was curbed and then ultimately cut short by injury.

“He’s in the running,” offers Stegall, backing up his opinion with Ray’s impressive passing yardage totals.

“You think about what he did in this decade, he’s still in the running. Two Grey Cups. Over 28,000 yards. It’s truly amazing what he was able to do.”

If this poll was the CFL’s “Two-Decade Team,” it’s pretty certain Ray would be in a race with the great Anthony Calvillo, who retired after the 2013 season.

“When you talk about all-time greats, Anthony Calvillo is in most eyes, one, or worst-case, two,” says Stegall. “But when you’re talking about this (past) decade, he’s not in the picture.”

“Ricky Ray is still in the picture.”

If injuries blunted what could have been a ridiculously successful ten-year stretch for Ray, the same might be said for a quarterback who rose to dominant status early in the decade, only to see repeated stints on the injured list begin to dog him, too.

And Stegall wonders what might have been for Travis Lulay.

“His numbers aren’t good enough to be considered number one, but he’s definitely in the conversation,” says Stegall, well aware of Lulay’s leadership qualities. Those were punctuated when the BC Lions rebounded from an oh and five start to win the Grey Cup, in 2011, with Lulay being named both Most Outstanding Player that season and Grey Cup MVP.

“That was one of the greatest stories,” says Stegall. “He just didn’t play enough, unfortunately, because of those injuries.”

Injuries took their toll on Matt Nichols, too, both when he was emerging in Edmonton and then starring in Winnipeg. Zach Collaros, rebounding from injury to win his first Grey Cup with the Blue Bombers last fall, suffered the same fate. And Jeremiah Masoli, who was on target for a statistical bonanza and maybe an MOP award in 2019, had those hopes dashed a third of the way through the season when a knee injury ended what had the potential to be the best quarterbacking campaign of the decade.

And it was an injury that provided the dramatic capper for another nominee’s long and illustrious career, a man who has since become a desk-mate of Stegall’s on TSN’s CFL panel. When Henry Burris completed Ottawa’s 2016 upset win over the Calgary Stampeders after having his knee lock up on him during pre-game warm-ups that day, he cemented his place in the annals of greatest Grey Cup performances ever.

Determination was a key ingredient for Burris, who threw for over 30,000 yards between 2010 and 2016, including 43 games of over 300 yards apiece. He also provided the decade with the most memorable sound bite, when he famously told anyone who didn’t think he could still get it done to “shove it,” during a halftime interview.

Stegall gets a kick out of that.

“Smilin’ Hank is not always smilin’. He’s very competitive,” says Stegall. “And when he feels disrespected, that’s when the best comes out of Henry.”

“He looked for ways to get him motivated. He hates when somebody thinks he’s not the best.”

When it comes to work ethic, quarterback’s are all very well-known for discipline but even within that framework, another All-Decade candidate, Trevor Harris, might have an edge over the rest. Stegall says that Burris has mentioned Harris’ seemingly unquenchable desire to learn and improve. 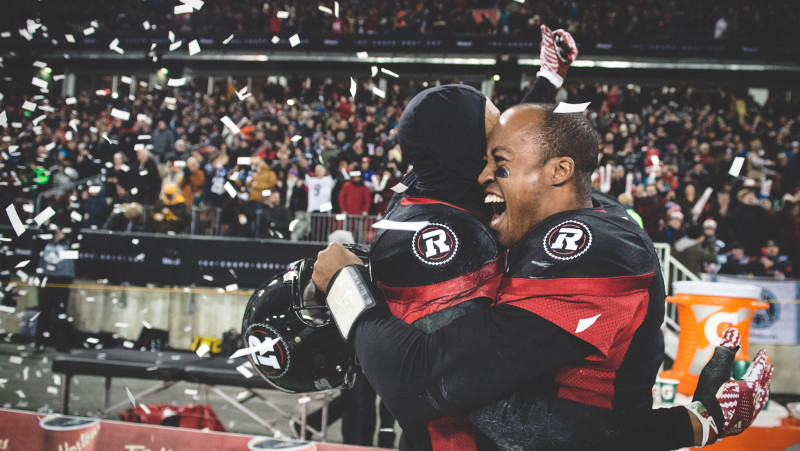 “He continuously puts in the work,” says Stegall. “That’s one of his main attributes. Why he’s been successful in this league so far.”

Saskatchewan’s Darian Durant merits consideration as well, starring over the first half of the decade and leading the Roughriders to a championship in 2013. His 26,256 passing yards, coupled with 32 games where he eclipsed the 300 yard mark, make him worthy.

But it’s his other abilities that make him an even stronger candidate in my eyes; his 2,379 rushing yards.

“He was a terror,” says Stegall. “He was a nightmare to bring down.”

“He didn’t look to run. But when he ran, that was a ‘business decision’,” says Stegall with a laugh, “having to try to tackle him all the time.”

Rushing yards aren’t a part of the stats provided on the All-Decade Team quarterback statistics page. But if that’s important to you in how you measure a pivot, Durant’s numbers will carry some weight. So will, for that matter, Reilly’s 3,336, and Burris’ 2,137.

I put it to Stegall that, if the All-Decade Team was like TSN’s all-time selections for each team, and carried a “foundational player,” that Kevin Glenn would have to be that guy.

Stegall laughs. “He’d be a foundational player on every single team. Kevin played in about, what? Five, six decades?”

Glenn, who threw for 29,448 yards during the decade (third only to Reilly and Burris), suited up for seven different teams between 2010 and 2019. He’s a guy who would just keep on keeping on, dutifully doing whatever was needed wherever he went. You need guys like that on your team.

“You ask anybody who played with Kevin and they’d say he made them better as a team and as a person,” says Stegall, who caught passes from Glenn over five seasons with Winnipeg, from 2004 to 2008.

“Kevin, along with Khari Jones, I always say, those were the two most important people in my football life. Those guys sacrificed so much for me, to go out there and score a bunch of touchdowns and have a bunch of yards.”

“Will he get consideration? No,” says Stegall, answering his own question. “But he did put up some good numbers within the decade.”