These days, Geroy Simon is on a kind of organizational treadmill, one with which I’m sure most CFL football operations executives are familiar.

“A lot of Excel spreadsheets,” said the Edmonton Elks’ Assistant General Manager, hopping off that metaphorical treadmill for a few minutes in order to offer up a glimpse into his team’s ongoing preparations for the May 3 draft.

No, he will not tell me the name of the young man the Elks will be taking with the first overall pick that night. In fact, Simon insists that General Manager & Head Coach/Defensive Coordinator Chris Jones has not made a final call on that just yet. “We still haven’t decided on who we’re taking,” said Simon. “We’re still getting all the information possible and crossing our t’s and dotting our i’s and still trying to figure it out.”

Maybe Simon’s being deliberately guarded, sure. Maybe he and Jones and the Elks know exactly who they are taking with that pick. Got the name on the jersey and everything. But there is a real possibility that, with a number of strong, strong candidates at the top of the list of prospects, the jury is still deliberating.

And that might come as a surprise to some. If you assume that draft preparation is pretty much done when the crescendo event – the annual combine – is over with, Simon is here to tell you that it is not.

“There’s a lot of cross-checking, a lot of information gathering that has to be done,” he insisted.

Yes, much of that had been done before execs gathered in Toronto last month in order to size up the top prospects in person. Yes, more was done during the combine, too. But there is always a little more to be gleaned. Making draft picks ain’t a perfect science, but guys like Geroy Simon try to get as close to that as possible.

So, more steps to be taken on the treadmill. “It’s a tedious process,” admitted Simon, “but it’s a process that you have to go through because you have to know all the names of the guys that are in the draft and where they’re going to be if you don’t draft them.”

After spending the last seven seasons with the BC Lions – most recently as Director for Global Scouting and US Regional Scout – Simon is stepping up in his first year as AGM with the Elks, working closely with Jones as the team cobbles together the best intel it can ahead of the draft. It has been – and continues to be – a daunting task.

After all, one does not simply prepare for the first pick, and then throw darts to make selections after that. Detailed preparations are made for the entirety of the draft and that means knowing as much as you can about as many players as possible. Eight rounds will go into the books. Seventy-four players will be selected. The Elks, currently, have eight picks in this draft, and barring a trade will make a selection in each and every round. In fact, they’ll select first in every round, except for the second.

Those Excel spreadsheets that Simon mentioned, will help in organizing a plan of draft attack for the Elks. He has one with 150 names on it. Another with the team’s projected top 100. Still another, with an elite top 15, all categorized and compartmentalized, ready for the whirring blender that is draft night.

Beyond the computer screens, Simon has “a huge whiteboard in my office – which I haven’t spent a lot of time in – and it has every guy’s name who’s in the draft.” All the names, he points out, are on individual magnets and can be moved up, down, here and there, as information comes in and as opinions change. And those opinions might very well change after Jones has a chat with even more prospects than those the Elks spoke with at the combine. “He likes to sit with them,” said Simon of Jones. “He likes to look them in the eye and see what they’re really about.”

In these last few weeks leading up to the draft, the Elks’ braintrust has been whittled down to almost the bare minimum, according to Simon. “For the most part it’s just me and him,” he said of Jones.

That it is the two of them doing most of the work at this point, Simon figures, is a good thing. It simplifies the process a bit and declutters the lines of communication. Whatever type of operation any other CFL team has in the run up to selection night, the Elks will not be bogged down with too many cooks over-seasoning the broth. Besides, Simon says, he and his boss are getting into sync, so they ought to be a quick-witted tandem when the Elks are on the clock. “I think our relationship is growing and it’s continually getting better,” he said. 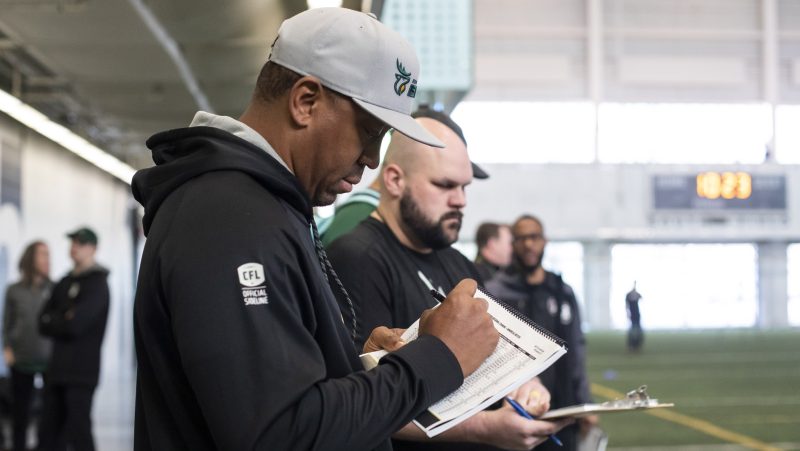 Being as nimble is crucially important on draft night, when things can become a bit of a blur and curveballs can come out of nowhere. “The only thing that we can know, for sure,” Simon said, “is who the first pick will be once we make that decision. After that you don’t know.”

But you try to know. That’s a fascinating little tidbit that Simon offers up. Not all draft prep is about the players available. “You can also take it another step further,” said Simon of a process that takes information about the league’s other decision-makers into consideration. It’s football, right? You study the opponent’s tendencies.

The Elks have been, in a way, scouting the other teams’ GMs and player personnel directors, looking for patterns that might help inform them as to what they can expect to unfold as the picks play out. “Just like you would do if you were scouting a player,” Simon said. “What’s this guy’s history? What type of things do they do in the draft? Are they gonna pick by need or best player?”

“I have another Excel spreadsheet,” Simon added, “of every team’s Canadians, their starters, the backups, guys on the roster.”

All of that in order to try and make an educated guess as to what other teams need most, which can help determine where their picks might land on draft night.

When the action heats up, and things get underway on May 3, the Elks’ draft room is not likely to be very crowded. With Simon and Jones as the point-men for gathering every last possible scrap of information and plotting strategy over the next couple of weeks, it will probably come down to the two of them in an office, joined by Elks’ President and CEO Victor Cui and Kris Hagerman, the team’s Director of Football Operations. “There won’t be a ton of people in the room,” said Simon.

At that point, the weeks of thoughtful prep, the time-consuming data mining, the conversations, opinion and the film study – all of it – will catapult the Elks into action when they make the first pick on draft night. Unless they trade that pick, of course.

“You can’t rule out anything,” teased Simon of the possibility of a wheel and a deal. “We obviously have to look at it. But you know, we haven’t made the decision yet.”

No matter. He’s probably got a spreadsheet to cover that possibility too.