Marcus Brady didn’t want to be a football coach, at least not at that moment.

He was still young, after all, and wanted to keep being what he was; a pro football quarterback.

But the fates intervened, and so did two key mentors who would provide first the opportunity to be a coach and then the opportunities Brady needed to grow in that role.

Marcus Brady’s life in the CFL would end up taking a sharp turn when he was 28, and the new direction would ultimately lead to where he is today; in the position of offensive coordinator for the NFL’s Indianapolis Colts.

He might well have gotten there anyway, but that is not for certain. What we do know is that the young man who reluctantly gave up his life as a player after the 2008 CFL season had his career shaped, for the better, by the CFL and the people within it. 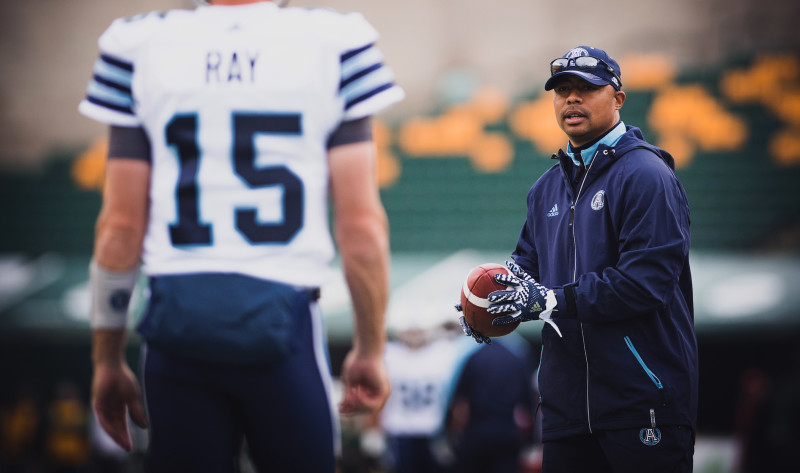 Marcus Brady was with the Argos from 2013-2017 as the team’s offensive coordinator (Argonauts.ca)

“It’s what I love about this sport,” says Brady. “Not just coaching, not just playing. It’s the relationships that you build.”

After a whirlwind week, marked by Brady’s being named the new coordinator in Indy, a week filled with media avails, meetings and even more meetings, Brady is on the phone from his car, wheeling his way home, and he is reminiscing about the people and moments that made his decade and a half in the Canadian Football League so memorable.

He is grateful for all of that. That much he made clear, in general terms, during the media conference held to introduce him as the Colts’ new OC.

Specifically, he has things to say about Marc Trestman and about Scott Milanovich, the coaches who first made the biggest differences, in convincing Brady the time was right to create a shift his football life, and then providing him with the templates that would help him find his coach’s voice.

“I was only 28 at the time and I was no longer gonna be with Montreal,” says Brady, remembering the winter of 2009. He’d played seven seasons in the CFL, the first two with Toronto, then two with Hamilton. Then a stint in Montreal, backing up hall-of-famer Anthony Calvillo.

“So I was gonna go into free agency,” he recalls. “Both Scott and Marc came to me and asked ‘did you ever think about coaching?’ I told them I did, that I wanted to coach when I was done. I was, like, ‘but I’m not ready yet. I’m young, still. I can play.’

“I felt I was ready to at least compete for a starting job at the time,” continues Brady, who reached out to CFL teams to see if he could get his chance to be the main man. “But in talking to teams it didn’t seem like I was gonna get that opportunity.”

As a player, Brady kept his head down and kept plugging and plugging, hoping for his breakthrough role. With Toronto, he understudied for Damon Allen, and during the 2003 Eastern Final in Montreal, came on for an injured Allen, nearly leading the Argos to an upset victory in a game that they ultimately lost, 30-26.

In the two years that followed with the Ticats, Brady fought for his place behind veteran Danny McManus, before settling in behind Calvillo with the Alouettes, for what would be the final three seasons of his playing career.

If Brady never lost his desire to elevate to number one status as a player, he did still simultaneously stoke the fires of a coaching life, something he had carried in the back of his mind.

His teammates noticed it, too. “Mookie Mitchell, he used to call me ‘OC,’ laughs Brady, speaking of receiver Derrell Mitchell, his teammate in Toronto for two seasons. “Because I was helping in the game planning. So, he knew that I had it in me.”

Mitchell has clear memories of Brady, of a young guy who always kept his teammates sharp when it came to schemes and assignments. If a receiver was quizzed by a coach on a particular route, and got the details wrong, Brady was quick to pounce, says Mitchell, laughing uproariously. “He would always make the correction,” Mitchell says, fondly.

And Mitchell remembers that Brady would dream up schemes of his own, though he would keep his place, never pushing his ideas on the coaches.

“He would never do it to the OC, never step on his toes,” says Mitchell. “But to the players, he was like: ‘Oh, look. I drew this up. We could do this.’ He was already building himself up to be an OC.”

That Argos team had a number of players who were thought of as potential coaches, other than Brady. Linebacker Mike O’Shea and defensive back Orlondo Steinauer, most predominantly. Brady would later coach alongside them, for a year, in Toronto, in 2013. Both of them, Brady says, reached out to him last week, after the news of his promotion was announced.

“It’s what I love about this sport. Not just coaching, not just playing. It’s the relationships that you build.”

“It’s humbling,” Brady says, of the outpouring of pride and congratulations coming from CFL circles, an outpouring that he could definitely feel, even south of the border. “I knew it was pretty big news.”

CFL observers already knew that Marcus Brady was the real deal, through his successes as an offensive coordinator in Montreal, but especially in Toronto, where he held the job for five seasons, culminating with a Grey Cup championship in 2017.

In 2009, though, coaching was still a consideration for somewhere down the road.

Brady had figured he’d earned a bona fide shot at being a team’s QB1. But when the only nibbles he got in free agency were those that offered more of the same – standing on the sidelines and hoping for a chance – he knew he needed to do some serious thinking.

Making the decision clearer – if not easier – was the track record Brady had with Milanovich and Trestman. Milanovich had been named quarterbacks coach for the Alouettes in time for Brady’s second season with Montreal. And when Trestman became the Als’ head coach in 2008 – Brady’s final year as a player – Milanovich was elevated to offensive coordinator.

“I knew it was a great opportunity in that Montreal organization at the time,” says Brady, reflectively. “It was kind of hard to pass up.”

Both Milanovich and Trestman became very important mentors for Brady as he shifted into his coaching career. Brady worked twice with Trestman, in Montreal to begin with, and then again with the Argos, during the 2017 season.

In watching Trestman, with whom he won three Grey Cups altogether, Brady soaked up overarching lessons in organizational structure and coaching technique.

In 2012, Milanovich left the Alouettes to become the head coach of the Argonauts, with Brady getting his first bite at the offensive coordinator’s apple that same year, in Montreal. But that was Trestman’s offence, really and truly, and Brady joined Milanovich in Toronto a year later, in 2013, in order to get even more responsibility as the Argos’ OC.

“I called it a lot in that first year,” recalls Brady. “But Scott missed calling (plays).”

That’s when the two started sharing the duties, with the workload being spread between them, based on gut feelings and momentum swings.

“There were a couple of games where we started out fast and he just kept calling it. In games where we didn’t, and if I got on it and got hot, he’d say ‘you finish it off.’ It was a good experience.” 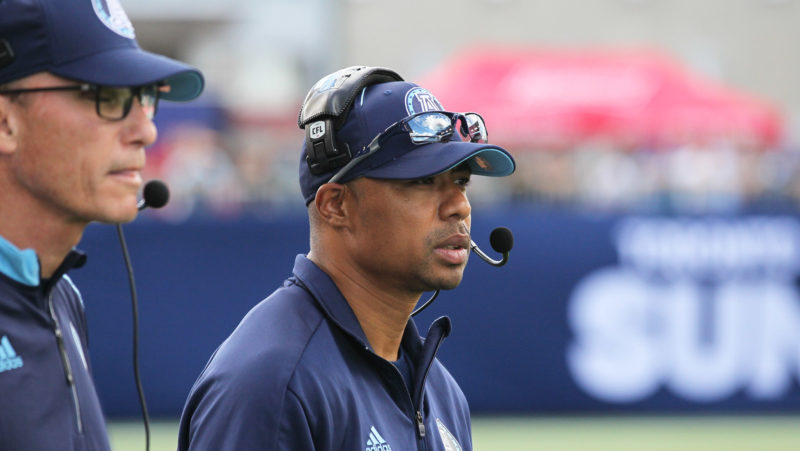 Brady is pictured with Mark Trestman (left) at BMO Field in Toronto during a game in 2017 (Dave Chidley/CFL.ca)

So, too, was working with the types of offences that are now so much in vogue in the NFL these days.

There are obvious offensive differences between the two leagues, based on field size, number of players and motion, to name a few, of course. But the NFL has never looked so much like the CFL as it has over the last few seasons, with pass happy offences now, mostly, the order of the day.

That’s because, Brady says, the NFL is now adopting so much from American college football’s spread offences, something the CFL has done for decades.

“To me, that’s kinda what the CFL is,” says Brady. “A bunch of spread offences. And that’s the college game.”

“Now that that type of offence is getting into the NFL, all the CFL fans, now they see it in the NFL game. I think that’s where it’s coming from.”

Zone reads have become more prevalent in the NFL. Brady was already well-acquainted with that style – with either the running back or quarterback being the ball carrier depending on what a certain defender does after the ball is snapped – because he’d coached it up in the CFL for years. In fact, he even remembers it as a player.

Now, as Brady begins to design and install his offence in Indianapolis, he can keep in mind that quarterback play in the NFL continues to become something different, something more familiar to longtime CFL and college fans. Something that was familiar to him through his CFL years.

“The quarterback position is evolving,” says Brady. “Not just sitting in the pocket. Some of those guys can still do it. The elite passers (he points to the recently-retired Philip Rivers as an example) can still just sit in the pocket.”

“Offences are designed so that they (quarterbacks) can break the pocket,” says Brady of college football. “Those are the type of players that are performing well at the college level. The last thing you wanna do is bring them to the NFL and tell them ‘well, now you’re just a pocket passer.’

“Coaches in the NFL are recognizing we can run some of these schemes. We can adapt.”

Adapting is something that Marcus Brady did, himself, back in 2009, when he made a career switch that he hadn’t been certain he was entirely ready for.

Turns out he was, and the CFL was just the place for him to prove it.