Scars aren’t always visible. Some wounds heal quickly, but others linger and fester and take months, if not years, to be covered up and effectively forgotten.

There are the mental scars, too, and those can last a lifetime and affect a person negatively and/or serve as motivation.

Jonathan Kongbo has scars, both the mental and the physical types. And they have him here today readying for his upcoming opportunity with the San Francisco 49ers after one whirlwind season with the Winnipeg Blue Bombers that taught him so much about the game and about himself.

“Last year was a physical, spiritual and emotional healing for me,” began the 24-year-old defensive end during a conversation with bluebombers.com from his home in Surrey, B.C. “That all happened in Winnipeg for me. I remember when I first got there, there was this ambiance around the team and the staff. Everyone believed in me and told me I was a good player and, in a sense, that helped rebuild me.

“And by the end of the Grey Cup, I would say I had come a long way. But that was a byproduct of the great leaders I was around in the locker room, the culture of Coach O’Shea set… it was the best thing that could have happened to me.” 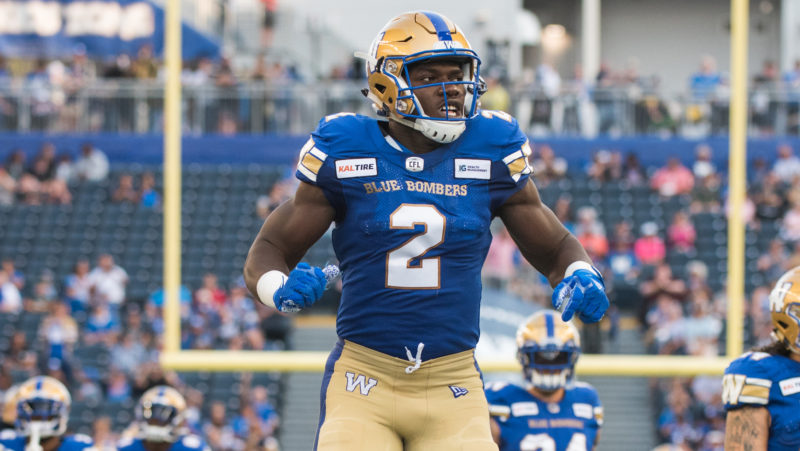 There are so many layers to Kongbo’s story worth revisiting here. Born in Kinshasa, in the Democratic Republic of Congo (formerly Zaire), his family fled the country during the civil war when he was five, ultimately settling in B.C.

A basketball star in high school, he didn’t turn to football until his senior season and played only six games. But so many saw his vast raw talent and he first committed to the University of Wyoming, leaving thereafter his freshman year for Arizona Western College and then choosing Tennessee as schools lined up to offer him scholarships after junior college.

He started two games as a sophomore for the Volunteers, 10 as a junior and was blossoming into a true NFL prospect during his senior season. And that’s when things changed dramatically in a game against Auburn on October 13, 2018.

We asked Kongbo to take us back to that time and place for some perspective. And his answer reveals both how deep those wounds were and the miles travelled to get him to the happy place he is at today.

“I had a great game before that one and it was looking like I was finally turning into that player everyone was expecting me to be,” he said. “In the Auburn game I had an interception, a sack and two TFLs (tackle for loss) all going into the third quarter. I was feeling really good about the game. I’m not really big into superstition, but during that game, I was praying a lot and the play before I got hurt I remember saying a quick prayer because I was doing so well. It was, ‘God, whatever happens today, I’ll be fine with it.’ Literally the next play I tear my ACL, MCL. On the sideline the trainers were trying to be optimistic, there were trying to help me emotionally. We came back after winning that game but that night I got the diagnosis I was done for the year.

“At that moment… you just feel so alone, you know? It’s like you let down a lot of people. You let down your family. You let down all the people that supported you. It was just a very trying moment.

“I remember sitting in the hospital room with the doctor,” Kongbo continued. “I was asking him about the fastest timelines possible. Initially, I thought I was Superman and kept saying, ‘I’ll be good in two weeks… I’ll be good in two weeks…’ But he said, ‘Nah… I’m going to be very honest: you’re going to miss the (NFL) draft. You’re going to miss the combines, Senior Bowl… everything.’ It was a very dark, trying time.”

What happened next over the long road to recovery was at times both encouraging and bitterly frustrating for Kongbo. And, again, it’s why being drafted by the Bombers and recovering in Winnipeg – both physically and mentally – was so important.

“So much of it, almost all of it, is mental,” said Kongbo. “Obviously there are the physical limitations. There’s swelling in your knee and there is the rehab you are facing.”

‘What I found most difficult was the mental aspect. You almost have a loss of identity. Throughout my whole college career, I was a football guy, a big dog at school. Then once I got hurt, people kind of forgot about me, forgot that I was a good player, forgot the things I had done in the past. I found myself struggling with who I was outside of football. To me, that was the hardest part.

“I give a lot of credit to Winnipeg because it taught me how to be a pro. That’s why I think everything happens for a reason. If I would have gone to the NFL straight out of college I don’t believe would have been prepared or my mindset would be where it’s at. Being around guys like (Adam) Bighill and Willie Jefferson taught me how to carry myself and have an everyday approach to work. It’s serious, but it can still be fun at the same time.

“That atmosphere allowed me to come in and be myself in that locker room. I had a goal: I wanted to come back as fast as possible for the season. Al (Couture, Head Athletic Therapist) slowed me down a little bit, which was for the best, and I thank him every day for that. I just kept pushing. It’s just about fighting.”

It was a regular scene at Bombers practice last season when Kongbo was recovered enough to participate: he would be soaked in sweat just minutes into the session and did not let up on the gas pedal from start to finish. There was often also no gearing down in his pace or intensity, which occasionally rankled some veterans.

Still, in retrospect that wasn’t just representative of Kongbo’s work ethic, but also part of his mental recovery and his race to return not just to the field, but to a regular contributor on defence and a bona fide NFL prospect again.

“To me, it wasn’t really hard work. It was just something I was accustomed to,” he said. “I tell people this: showing up and working hard every day is easy for me. That’s in my blood, that’s in my family. That’s how my father worked. When we first moved to Canada my father worked up in northern B.C. chopping lumber for three years. He worked night and day, worked three jobs at a time for a while.

“To me, that’s how you progress in life – you put the work in. I get that from my parents for sure. At the time the MCL/ACL injury it was a big thing. But if you look back at it now it was just another obstacle.

“I feel that whenever something bad happens it is a test from above and a blessing will be on its way.” 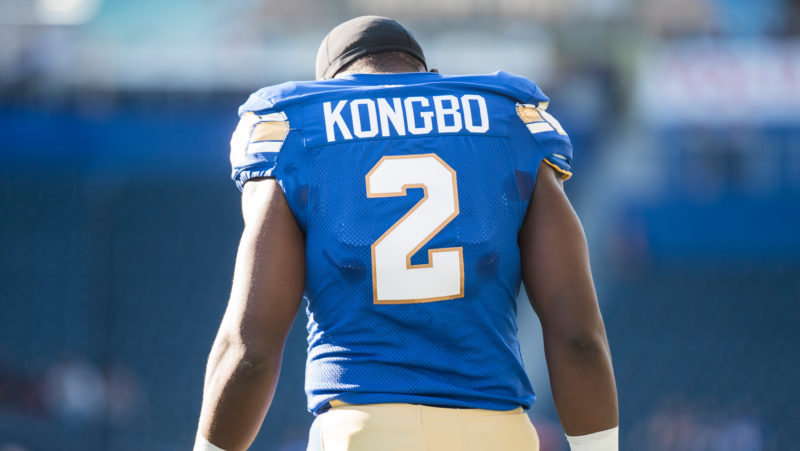 Jonathan Kongbo will try and crack the San Fransisco 49ers’ roster heading into the 2020 season. (BlueBombers.com)

Kongbo will be leaving next week for 49ers training camp. He worked out for the Miami Dolphins and also had interest from the New York Giants and Minnesota Vikings before settling on San Francisco – a team that had been tracking him since before his senior year at Tennessee.

The personnel types with the 49ers have gushed about his raw ability and untapped potential and to meet the requirements of playing end in the NFL Kongbo has added 20 pounds of muscle in bulking up to 270.

And in those rare moments when he isn’t looking ahead at this next opportunity, Kongbo looks back at a chapter just recently closed with the Bombers and smiles.

“I’m getting goosebumps right now just thinking back about it,” he said. “I’ve never been a part of a team like that. I just remember a certain point leading up to the Grey Cup game, a practice, where there was this sense we were really all in it together. Everyone was doing their job. There were no egos. Everyone just wanted to win that game.

“We were so tight as a team. I could look at every single player on that team and say, ‘That’s my brother.’ I’ll always love those guys, man.”