TORONTO —  Syracuse defensive end Kingsley Jonathan led off a talented list of football players from around the world to hear their names called on Tuesday afternoon in the CFL’s Global Draft.

Jonathan, who was born in Nigeria and played his high school football in North Carolina and Maryland before being landing with the Orange in the NCAA, was chosen first overall by the Montreal Alouettes. Als’ general Danny Maciocia kicked off a busy day that saw him open the Global Draft and reportedly had swung a deal earlier in the day to move into the first overall spot in Tuesday night’s National Draft.

Maciocia will have to wait to see what Kingsley can bring to his roster. The 24-year-old signed with the Buffalo Bills this past weekend, at the conclusion of the NFL Draft.

Jonathan had 101 tackles (60 solo), 21.5 tackles for loss, 15 sacks, three forced fumbles and recovered two through 56 career games with the Orange. 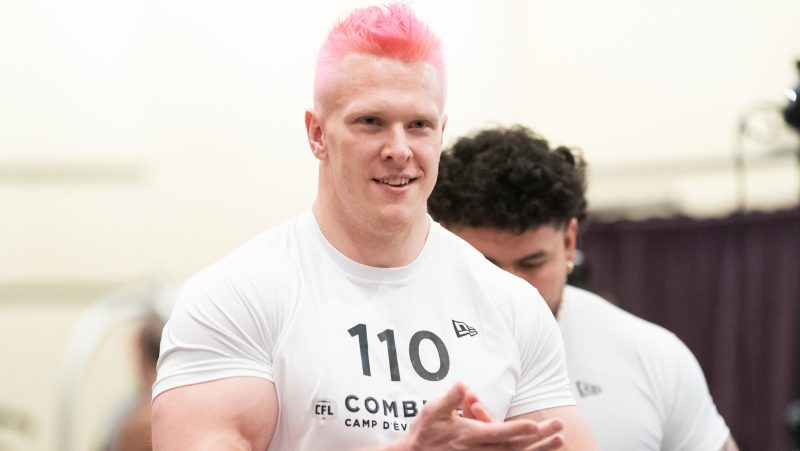 Latvian defensive lineman Karlis Brauns stood out in a number of ways at the CFL Combine. The BC Lions were impressed enough to take him third overall in the Global Draft (Kevin Sousa/CFL.ca)

The first round of the Global Draft saw the trend that emerged in 2021 continue, with four Australian punters going in the first round. The Hamilton Tiger-Cats took Bailey Flint second overall; the Toronto Argonauts took John Haggerty fourth overall; the Winnipeg Blue Bombers took Tom Hackett sixth overall and the Edmonton Elks closed out the first round by taking Ben Griffiths at ninth overall.

Australian punters are intriguing to CFL teams for a reason, explained Greg Dick, the CFL’s chief financial officer and head of football operations.

“They haven’t grown up being the traditional punter in North America,” Dick said.

“In Australian rules they’re directional punting all over the field and that lends itself to the Canadian game and sometimes translates better to the CFL game than the NFL game.”

Three more Australian punters went in the second and third rounds of the draft, with a Belgian punter (Corliss Waitman, Edmonton) and kickers from Brazil (Rafael Gaglianone, Edmonton) and Mexico (Gabriel Ballinas, Ottawa) also being selected.

There was a defensive focus in the top portion of the draft. After Jonathan’s selection, the BC Lions took Latvian defensive lineman Karlis Brauns third overall and the Saskatchewan Roughriders took linebacker Jordan Genmark Heath fifth.

Heap of Genmark Heath highlights! 🎥
Check out some footage of the latest addition to the Riders roster of international talent! pic.twitter.com/EdG0fjSJ19