You know him best as one of the CFL’s finest athletes. These days, when he isn’t preparing for a return to the field in 2021, Shaq Johnson is busy perfecting his other talent: Rap music. H.I.M. is his stage name. And you can sample his work on Spotify, Apple and pretty much any of the other major music providers. Appearing on episode 37 of 1st and Now, Johnson says the rap name acronym is meant to symbolize what he is all about.

“It stands for Handled It Myself,” explained the Lions’ speedy receiver.

“It’s just signifying basically my road to this date. Whether it’s professional football, or even just choosing to do some of the music or even trying to build my clothing brand, it’s a lot of the things I’m doing myself. I don’t really have that many people in my corner helping, you know what I’m saying? I have certain people that were significant in my life and I appreciate them, but as far as anything else I really had to go out there and still prove it and still do it, you know? So that’s kind of where the Handled It Myself came from.”

Johnson’s main motivation for utilizing his musical talents stems from his father Alvin who was a reggae performer before Shaq and his other seven children were born. After the 2020 season was officially scrapped, Shaq returned home and decided he wanted to devote some of his time away from the gym to an activity different from football. He plans on releasing an E.P. album in the next few months.

“You can just go in there, say what you want, say how you feel and be done with it. I’m definitely enjoying it. You guys can definitely look forward to some more music coming out. Hopefully, you guys like it, and that’s what it is.”

The H.I.M. acronym is pure Shaq. Always defying the odds. A fourth-round pick out of the London Beefeaters junior program in 2016, Johnson has developed into one of the CFL’s most productive Canadian receivers. His 39 catches and 597 yards in 2019 were both career highs. Year five with the organization will have to wait, but you get the sense his best is yet to come. H.I.M. also looked back on his first CFL touchdown on a hot night in Hamilton in 2017 in front of family and friends. 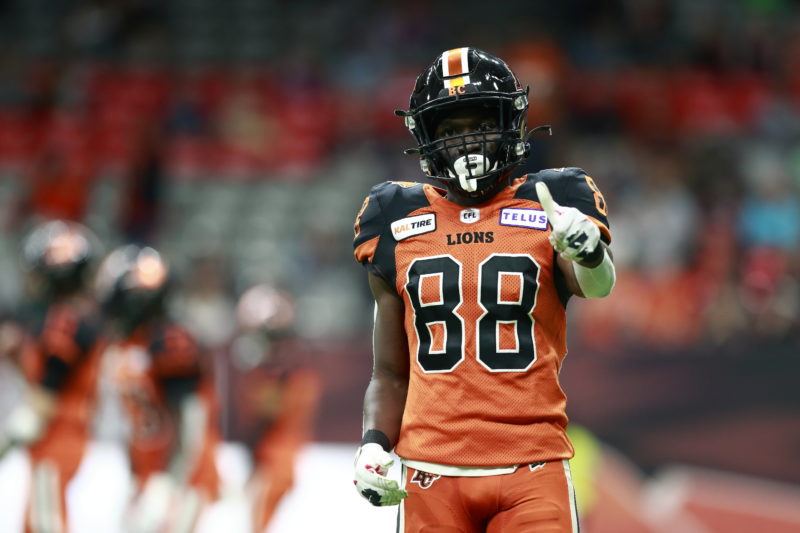 “It was kinda surreal,” he remembered.

“I remember Khari (Jones) putting in the play that year, it was like a Z slip-screen but I was off the line. I never even thought of us running a play with me coming from the field side all the way down to the boundary to slip-screen, leak out and get the pass from Lulay. We practiced it that week and I was like ‘if we call this in the game, I’m definitely scoring.’”

Sure enough, they got down into the red zone, and it happened. It was all part of Travis Lulay’s record-setting night of 436 passing yards for a quarterback coming off the bench.

“As soon as I turned my head back, I’d seen the ball in Lulay’s hand and it was like ‘ just don’t drop this thing.’”

What a way to clutch up for the first time playing in front of both of his parents. Also in episode 37, Shaq talks about what it’s like playing on the same squad as his younger brother Hakeem and how the duo motivates one another during their off-season training sessions. Shaq recalls when younger brother actually reached out to him on social media while in high school to tell him he wanted to follow in his footsteps.

He also speaks on his track background and how that helped him develop as a receiver. It was quite a well-rounded conversation with Shaq AKA H.I.M. He truly is one of the team’s most interesting figures.