When he was growing up in Richmond, BC, Bryan Chiu remembers not seeing colour. The former Montreal Alouettes’ offensive lineman and an offensive line coach in the CFL for five seasons feels far removed from that world today.

“Now you worry. I don’t worry so much about myself. I worry about my aunts, and my mom and my sisters,” Chiu told Donnovan Bennett on this week’s edition of The Waggle. As a Chinese-Canadian living in Vancouver, the women in his life have shared some painful realities with him recently.

“My mom, she’s elderly and sometimes when she goes out she might bump into people the wrong way. It’s just the racial slurs, the quick little one-line jabs, the way people act towards her. She’s become quite frightened to go out on her own now,” Chiu said.

“My sister is a dentist in Prince George. She recently went to Costco to buy groceries…and some lady looks over at her and says, ‘I’m assuming it’s welfare Friday.’ My sister was speechless, she didn’t know what to say. She just kind of decided, ‘I’m never going back.’”

Anti-Asian hate has consistently been in the news after a mass-shooting in Atlanta on March 16, where six of the eight people killed in the shooting were Asian women. We’ve heard about Asian people being targeted for harassment and violence since the pandemic began, but Chiu doesn’t think that’s the sole issue at play here.

“Racism…is a thing that’s learned. The pandemic didn’t cause you to look down on other people and judge other people because of their skin colour,” he said.

Part of the reason that Chiu spoke with Bennett on The Waggle was to encourage people to speak out when they see or are victims of racism. That’s not always easy, but he said it’s necessary if we want to see change.

“Growing up we’ve been taught to be seen and not heard. If you really think about that, being seen and not heard we are the perfect minority for any racist people. We’re going to be quiet, we’ll walk away from any trouble. You abuse us, we’ll just quietly walk away. We don’t want to cause a disturbance,” he said.

“To this day my aunts, my mom, the older generation, they still believe that. They back down and walk away. I think now you’re seeing more and more Asians speak up and say enough is enough. It’s time to hear our story. This is probably the best way to encourage minorities to be able to speak up and not be fearful.” 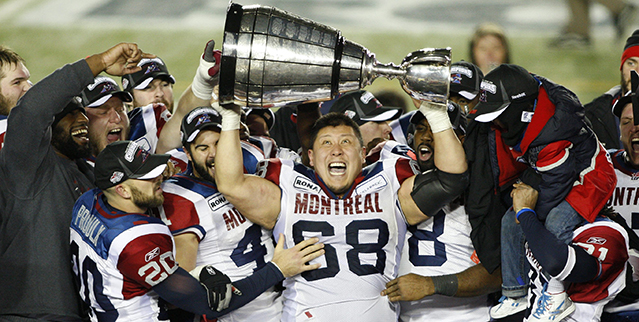 Bryan Chiu looks back on his career with the Montreal Alouettes as an example of football unifying players from varying backgrounds. (Photo: The Canadian Press)

Sport isn’t the perfect, racism-free haven that we’d like it to be. Chiu remembers going to play football at Pacific University and then Washington State and seeing a racial divide between teammates there. He looks back on his 13 years playing with the Alouettes as an example of how football can unify people.

“I joke to this day that in Montreal we had the most diverse group,” he said.

“As a centre, I was this Asian kid from Vancouver. My job was to snap the ball to this Mexican guy behind me from East L.A. (Anthony Calvillo). His job was to throw it to this Canadian Mormon guy from Utah, in Ben Cahoon or to hand the ball to this African-American guy from Camden, New Jersey (Avon Cobourne).