The question is more than half a century old. Who will be the CFL’s next great Canadian quarterback?

It was 1969 when Russ Jackson won a second straight Grey Cup — along with every other known accolade, including the Lou Marsh Award as Canada’s top athlete — before retiring to become a full-time educator.

With a .639 winning percentage, 185 touchdowns, and nearly 25,000 passing yards in 12 seasons with the Ottawa Rough Riders, Jackson has always been the exception.

Even in the 1960s, when Don Getty and Frank Cosentino started games, followed by Eric Guthrie, Gerry Dattilio, and Greg Vavra the next couple of decades. Those five combined could barely match Jackson’s career 137 starts.

Since Jackson retired, nine Canadian quarterbacks have made their first career start. That includes the stretch of 19 years without one, between Larry Jusdanis’ first and only start on Aug. 16, 1996, and Brandon Bridge‘s debut on Nov. 8, 2015 as a Montreal Alouette.

In reality, Dattilio was the last Canadian quarterback to make significant ripples. In 11 seasons with Montreal and Calgary, Dattilio started 35 games, posting a 16-17-2 record. His 1,271 passing attempts ranks second all-time among pivots with a Canadian passport, same with his 9,952 passing yards.

Many others have tried in his wake. Giulio Caravatta played in 114 games in eight years with the BC Lions, starting twice. Highly-touted out of the University of Ottawa, Brad Sinopoli converted to a receiver, becoming one of the best Canadian pass-catchers in the league.

And while Brandon Bridge started a playoff game with the Saskatchewan Roughriders, Calgary quarterback Andrew Buckley might have been a starter eventually had he not retired for med school at the age of 24. 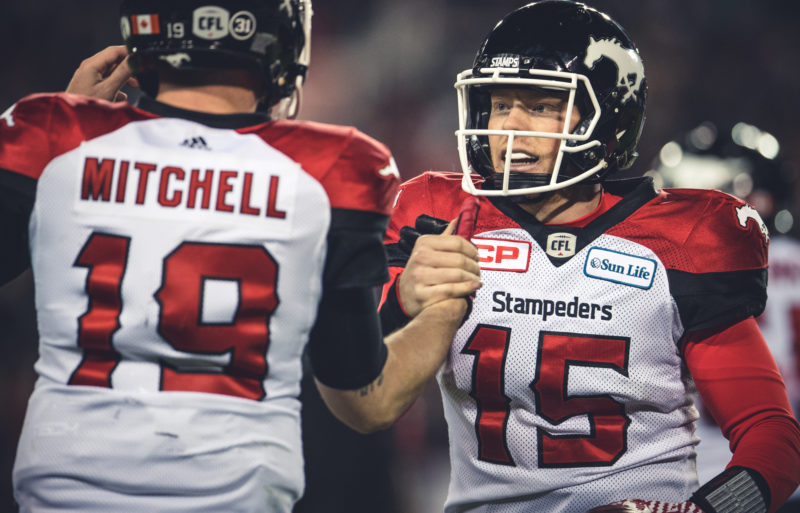 We can only wonder what Andrew Buckley would have done in the CFL if he continued his career (Johany Jutras/CFL.ca)

That generation of quarterbacks has moved on — Bridge is transitioning to a career with the Peel Regional Police — but there’s plenty of excitement for the next crop of prospects.

One year ago, the BC Lions made a significant investment when they selected Nathan Rourke in the second round, 15th overall, in the 2020 CFL Draft. Michael O’Connor, a third round pick in 2019, signed with the Calgary Stampeders, where quarterbacks often thrive.

It’s up to them to set a new trend of national success at football’s most celebrated position.

Almost six years after Jackson’s retirement, Lions quarterback Eric Guthrie went head to head with Edmonton star Tom Wilkinson in his first career start on Aug. 14, 1975. Guthrie threw for 251 yards, two touchdowns, and two interceptions on 17-of-37 passing in a losing effort before returning to a backup role for two months.

Guthrie made 10 more starts with the Lions in ’75 and ’76, before joining Saskatchewan, where he started two more games in 1977. He won six of his 13 career starts, throwing for 2,690 yards with 12 touchdowns and 27 interceptions.

Three years after arriving in the CFL, Gerry Dattilio made his first career start for Montreal on Sept. 5, 1978 in a loss to Condredge Holloway and the Ottawa Rough Riders. In that game, Dattilio threw for 209 yards, two touchdowns, and two interceptions on 18-of-30 passing, earning him three more starts that season.

With 161 games in 11 seasons, Dattilio nearly matched Russ Jackson’s longevity, ranking second all-time among national quarterbacks. He would go on to start 35 games with Montreal and Calgary, compiling a 16-17-2 record to go with 9,952 passing yards.

While the Montreal Concordes struggled to a 2-14 season in 1982, Canadian quarterback Luc Tousignant deserves some credit for both of those victories, going 2-3 in his five starts — including a successful debut on Aug. 6, 1982. Despite going 5-of-15 for 63 yards, Tousignant found the end zone twice in that game, earning the victory over Hamilton counterpart Tom Clements.

Tousignant had a short stay in the CFL with just 12 games in one season, but got to go head to head with several of the league’s top starters including Clements, Warren Moon, Joe Paopao, and John Hufnagel. The Trois-Rivières, Que. native was also an NFL draft pick and a prolific handball player, representing Canada at the 1976 Summer Olympics.

Inducted into the Canadian Football Hall of Fame in 2020, Greg Vavra is mostly recognized for his play with the Calgary Dinos. He spent five seasons with Calgary, winning the Vanier Cup and Hec Crighton Trophy in 1983 in addition to setting a single game passing record with 627 yards vs. the University of Saskatchewan Huskies.

Vavra compiled a 5-7 record throughout 12 CFL starts for Calgary and BC, including a successful debut his first summer in the league on Aug. 19, 1984, when he threw for 290 yards and two touchdowns in a win over Saskatchewan. He made nine starts as a rookie and two more with the Stampeders in 1985 before moving to the BC Lions. He would finish his career in Edmonton.

A rising star with the Calgary Dinos in the late ’80s, Bob Torrance was selected by his hometown Stampeders in the third round, 22nd overall, in the 1991 CFL Draft. Three years later, Torrance would make his first career start against Damon Allen and the Edmonton Football Team, completing 25 of 41 passes for 264 yards and three interceptions in a losing effort.

Notably, Torrance marked the first start for a Canadian quarterback in six years, dating back to Vavra’s last start on Oct. 11, 1987. In his three-year career, Torrance threw for 870 yards, three touchdowns and 12 interceptions. He passed away on Jan. 10, 2012.

After punting and quarterbacking for Simon Fraser, Giulio Caravatta signed with BC as an undrafted free agent in 1991. Four years later he would make his first career start, throwing for 141 yards and an interception on 16-of-31 passing against Tracy Ham and the Baltimore Stallions. Things didn’t get any easier for Caravatta, who then opposed Doug Flutie in his second and final start in 1996.

RELATED
» Cauz: Diving into highlights from the 2005 Grey Cup
» O’Leary: How pro days will affect the CFL Draft
» Edmonton finalizes coaching staff for 2021

Caravatta was multi-talented, totaling 114 punts in his career for a 37.3-yard average. He also amassed 17,205 yards on kickoffs and eight single points. His last start at quarterback on Oct. 27, 1996 was the last for a Canadian for 19 years, leading up to Brandon Bridge‘s first start in 2015.

A fifth round draft pick of the BC Lions in 1995, Larry Jusdanis was traded to Hamilton in 1996, where he made his first and only career start on Aug. 16 against Jeff Garcia and the Calgary Stampeders. In that game, Jusdanis completed 13 of 22 passes for 175 yards and a touchdown, but also threw three interceptions.

No quarterback in this era received more attention than Brandon Bridge, who was selected 31st overall by the Alouettes in 2015. A dual threat pivot with a big arm, Bridge made his first career start on Nov. 8, 2015, throwing for 220 yards and two touchdowns while completing 70 per cent of his attempts.

While his Alouettes career was short-lived, Bridge made an impression on the Chris Jones-led Riders, platooning with veteran pivot Kevin Glenn. He appeared in the Eastern Final in 2017, then, in 2018, became the first Canadian quarterback to start a playoff game since Dattilio in 1984, as the Riders fell to Winnipeg in the Western Semi-Final. Bridge ends his CFL tenure with a 3-3 record in six starts, with 2,697 yards, 14 touchdowns and 10 interceptions.

There’s no telling where Andrew Buckley might be today had he continued to groom under current Stampeders starter Bo Levi Mitchell and the Stampeders’ coaching staff. His cause was a noble one, however, announcing he would retire to attend medical school before the 2018 season. A two-time Hec Crighton winner with the Calgary Dinos, Buckley was a seventh round draft pick in 2015.

On Nov. 3, 2017, in the Stampeders’ season finale, Buckley made his first career start, completing 13 of 18 passes for 120 yards and an interception vs. Winnipeg. He also often showed off his wheels, rushing for 157 yards and 11 touchdowns in two professional seasons — including a 60-yard run in 2017.