CALGARY — Heading into 2021 free agency, Calgary Stampeders president and general manager John Hufnagel is getting prepared for the first step in what should be another hectic off-season.

The Stamps have had to assess its own roster and the market as a whole without there being a 2020 season to judge players on. It’s made for some unique challenges when it comes to teams deciding what to do this off-season.

“You go through it year-by-year. You’ve got to say it’s different because this whole year has been different,” Hufnagel said on Monday. “What you’re doing now is trusting your ability to come to conclusions from fieldwork and not so much in-person and seeing with your own eyes live. That’s a different part and the difference with what’s going on.

“A lot of these guys I would’ve seen play up against us this past year. I don’t have that ability, obviously.” 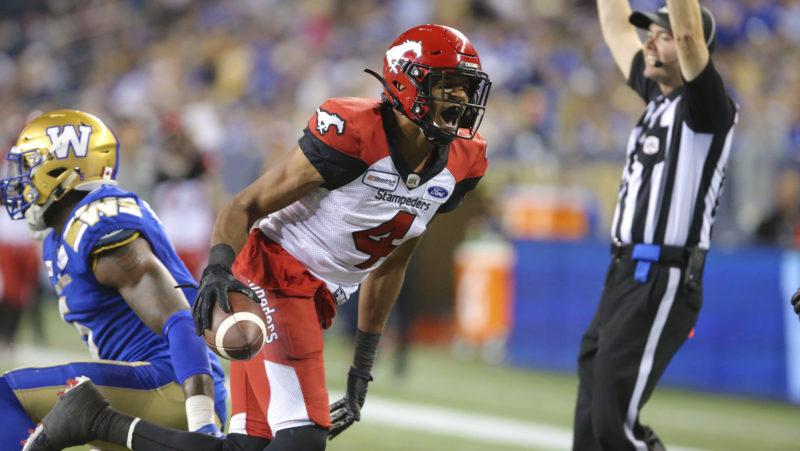 Just days away from the start of free agency and we’re starting to get an idea of what the 2021 Stamps could look like.

In exchange, the Stampeders received a fifth-round pick in the 2021 CFL Draft and a third-round selection in the Global Draft.

“Like I have with all of the veteran players over the last two months to restructure contracts, I talked with Eric and Cordarro and Robertson,” Hufnagel said. “I informed them that I most likely wouldn’t be able to fit them in this year’s roster, unfortunately, and I thanked them for all the great things they did for us as Stampeders.

“They all were disappointed but they understood, as most players do throughout this experience over the last few months. So I knew Murph (John Murphy) was interested. He and I talked on several occasions and he thought it would be a good idea if he was able to talk to these guys before free agency actually hit. So we just put together a small deal that improved ourselves a little bit in each of the two drafts. So it worked out well for both parties I believe.”

Since the trade, all three former Stampeders have signed on to join the Argonauts for the 2021 season.

Rogers and Law starred for the team on their respective sides of the ball in 2019 while Daniel was used as an important veteran piece, playing both boundary corner and SAM linebacker for the Stamps.

The team did make some moves to add to the defence during the off-season last year, signing defensive backs Richard Leonard and Branden Dozier while also landing pass-rusher Isaac Adeyemi-Berglund with the third overall pick in the 2020 CFL Draft.

That made up for a couple of impactful losses on the defence, as Tre Roberson and DaShaun Amos both departed for NFL opportunities while Chris Casher headed to BC in free agency.

To add to the losses on defence, Nate Holley was also released to try his hand at the NFL and Wynton McManis has reportedly signed a futures contract with the New Orleans Saints.

Hufnagel and the Stamps typically aren’t ones to make huge waves at the start of free agency, playing the long game to find some unsigned gems, and Hufnagel sees it going the same way this time around.

“I’m pretty satisfied with our roster right now,” he said. “Obviously, I always try to improve things and bring in as much competition as possible. But this is a bit of a different year because we have two classes so to speak.

“Two years of rookies that are coming in to combat for jobs. And I have a bunch of young players on my board that were scheduled to come to rookie camp and training camp. I’d like to give them an opportunity to show what they can do. We have a lot of veteran depth, we do have a lot of skill to compete and help us in those positions.

“…I always said I would use free agency to fill unexpected holes. That did occur last year so we did what we thought we had to do to put together a championship-winning football team. Right now, I’m comfortable with where we’re at.”

Luckily for the Stamps, they were able to bring in a few familiar faces over the past few weeks, getting Amos back in the fold while also signing linebackers Jameer Thurman and Cory Greenwood.

With three members back who do know the Stamps well and are familiar with the system, it will be easier for them to integrate this coming year than brand new faces.

“That’s always the concern,” Hufnagel said when asked about maintaining the culture of the team through those signings. “How we went through this process was a lot of virtual meetings between myself, Dave (Dickenson), and our personnel department — (Brendan) Mahoney and Cole (Hufnagel).

“We wanted to be on a team that would have enough veteran presence in most of the positions and I think we achieved that. We lost some good players, there’s no question about it, but I’ve always said I can’t be afraid of change.”

With free agency and the draft nearing closer with every passing day, the Calgary staff is working daily to get the team ready to go for the 2021 season.

While the names may look different from those on rosters past, it’s hard to bet against anyone trusted by both Hufnagel and Dickenson to don the Red and Black with their proven track record of success.