VANCOUVER — When it comes to adjusting to life in his first professional training camp this summer, it should look and feel normal for Ben Hladik. The hard-hitting, athletic linebacker already made some memories at Hillside Stadium during his illustrious high school career with the Vernon Panthers.

Along with regular visits to Hillside to take on South Kamloops, the venue also served as Vernon’s home for BC high school playoff action when all teams were required to play on turf as opposed to the regular grass at Vernon during that time. One week removed from the Lions calling his name in round three of the CFL Draft, Hladik is reflecting fondly on a lot of the big moments that helped him live out a childhood dream.

“It’s been an amazing feeling,” said Hladik from his Vernon home this week.

“I was surrounded by family on draft night and as soon as the Lions were on the clock I got the phone call from Neil (McEvoy). Everyone in the room went silent. After the call, it was excitement everywhere. It was a dream come true.”

How quickly time flies. Hladik also remembers taking part in the club’s Play with the Pros program as a youngster. Looking back on it, that was a key moment in his football life.

“That’s what made me want to do this. I remember meeting Geroy Simon,” Hladik recalls.

“It was so much fun to be able to learn from guys like that. Now I can’t wait to do the same with some of the younger kids and one day make their own dreams come true.” 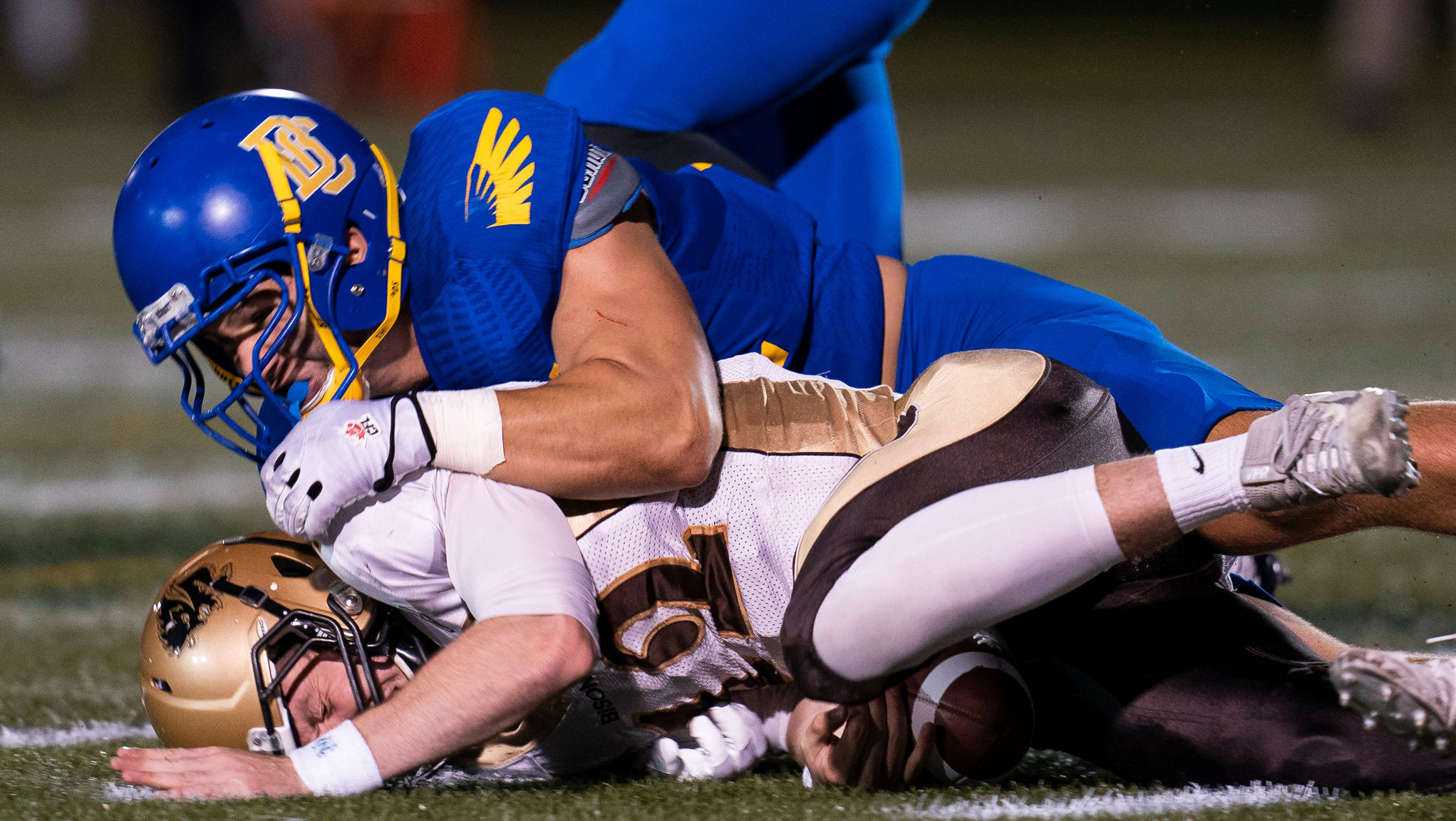 Ben Hladik was inspired to play in the CFL after meeting BC Lions’ legend Geroy Simon through the club’s Play withthe Pros program. The Lions took him in the third round of last week’s CFL Draft (Photo: UBC/Rich Lam)

We’ll never know the true impact of a lost U SPORTS season in 2020. With another year of football under his belt, it’s safe to assume Hladik would have climbed the draft board even higher. At the end of the day, the Lions have themselves a solid homegrown prospect.

After helping Vernon reach the 2016 Subway Bowl where they fell short against top-ranked Seaquam, Hladik became an impact player in his three seasons with the T-Birds.

A two-time Canada West All-Star, Hladik was also named Canada West Defensive Player of the Year in 2018. He continued his big-game prowess by leading the T-Birds to a battle for the Hardy Trophy against Calgary in 2017.

“I don’t think I could have been put in a better situation,” he said.

“From the time I got there, the coaches believed in me and put me in the best position to make plays. I really learned a lot from coach (Pat) Tracey (defensive coordinator) and my linebackers coach, Chris Hoople. On the field and in the film room, they did a really good job preparing me for my future.”

Hladik referenced Shea Emery and Cory Greenwood as two CFL linebackers he models his game after. Lions brass certainly envisions him playing with a similar edge.

“Another exciting athlete that’s going to be with our football team for hopefully, years to come,” said co-GM Neil McEvoy of Hladik.

“He’s going to be able to play teams for us right away and develop, hopefully, into a linebacker or defensive lineman and take some real reps with the first-team group. When you’re going through this process, that’s what you want; you want guys who have the opportunity and have the athletic ability to complement what you currently have. He is certainly a guy I’m looking forward to seeing how he develops.”

Not only did the COVID-19 pandemic result in a year away from the gridiron, but Hladik also had to adjust on the fly when it came to big milestones in his personal life. He and his wife Kailyn, a kinesiology graduate from the University of the Fraser Valley, had a big wedding planned up at Predator Ridge last spring.

With the pandemic putting a halt to large social gatherings, they opted for a smaller celebration on the lake.

“The closest loved ones were there, that’s the main thing,” he explained.

It was a year of adjustment for everyone. The rookie linebacker is now even hungrier to strap on the pads and show people what he can do from Day 1 of his first Lions camp on that familiar playing surface in Kamloops and then once again run through the tunnel at BC Place.

“I can’t wait to play there,” Hladik said.

“In high school, there was just the one section blocked off for fans. Now I can’t wait to hopefully soon have fans allowed inside and for us to be able to feel their excitement.”

He certainly speaks for everyone in the Lions organization.