Imagine if the Toronto Argonauts signed Clemson quarterback Trevor Lawrence, the presumed No. 1 overall pick in this year’s NFL Draft. It would send shockwaves throughout the pro sports world, especially in an era where stories with much less significance are amplified via social media.

Thirty years ago this week, the Argonauts did just that with the signing of Notre Dame wide receiver Raghib “Rocket” Ismail, the player expected to be the first-overall selection by the Dallas Cowboys. It was exactly the enormous splash the new ownership group of Bruce McNall, John Candy and Wayne Gretzky was looking for.

How could this happen? How did such a remarkably gifted player – a member of the Sports Illustrated All-Century NCAA team – end up wearing Double Blue instead of blue, silver and white?

It all started with some random office talk.

“It was a sit-down with John Candy in my office,” the then Argonauts General Manager Mike McCarthy told Argonauts.ca in a phone interview. “It was in February, right after the announcement that they were buying the team. We were sitting around, getting to know each other a little better. John was holding court and saying, ‘We need to do this, we need to do this,’ he was just rolling things off, saying all kinds of things.” 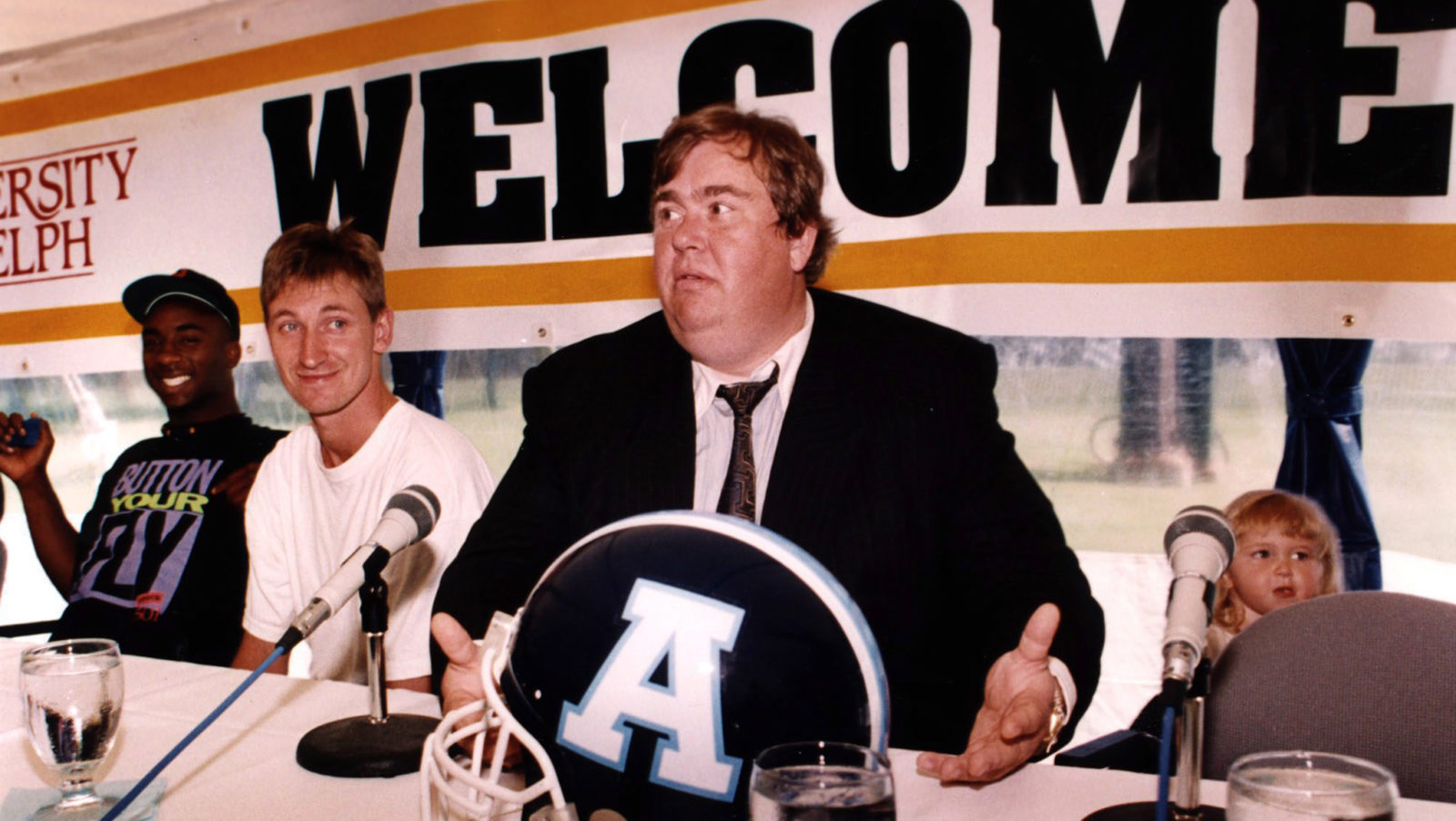 Then Candy said the magic words that would get things rolling.

“We need to do something big.”

It didn’t take long for McNall to echo his affable partner.

“I really want to do something big and get a big-name player,” said McNall, according to McCarthy.

The football personnel expert then went to the top of his wish list to make a suggestion to the group, never believing for a second it was a possibility.

“Rocket Ismail would be my guy, because there were no offensive players in the draft who were rated high,” recalled the G.M. (Detroit selected receiver Herman Moore tenth overall, the first offensive player chosen). “Everybody knew this guy from Notre Dame. We talked about a quarterback, but we had five under contract including Matt Dunigan and Rickey Foggie.”

It was agreed that the talented receiver would be the team’s primary target even though the offence really didn’t need a ton of help. The Argos set a league record in 1990 by scoring 689 points, or just over 38 points per game. Michael “Pinball” Clemons was the league’s defending Most Outstanding Player, D.K. Smith had 1,826 receiving yards and a stunning 20 touchdown catches.

The Argos also had a receiver on board who had just completed his third season with the team. Paul Masotti had heard rumours that the team was interested in the Rocket but didn’t think it would be possible to sign him.

“Not at first,” Masotti told Argonauts.ca in a phone interview. “But then knowing the style of management we had at the time I thought wow, it could happen.”

Masotti’s job wouldn’t be in jeopardy because the team needed talented Canadian receivers, but after such a remarkable offensive display in 1990, did the team really need the Rocket boost?

“When you look back at the teams that we won the Grey Cups with, you had to have a team that good,” explained the Acadia product. “That’s a lesson learned. When you know you have a good team, if you’re not an all-star at every position, which we were in ’91, ’96 and ’97, you think you’re good until you know you’re not. When you look back you know how good you really have to be.”

The Argos had not won the 1990 Grey Cup despite their outstanding offensive display, so they had to improve. That’s where the Rocket came in.

Ismail wowed scouts at the NFL Combine by running 40 yards in a ridiculous 4.28 seconds, still one of the fastest times ever posted at the event. He not only had skill as a receiver but was an insanely talented returner. In his three seasons with the Fighting Irish he returned one punt and five kickoffs for touchdowns, including two in the same game against Michigan.

He was a marketing dream; he was exciting, he played a highly visible position, he came from an exceptionally high-profile program, and he had a spectacular nickname.

After a week or so passed, McCarthy had his first contact with a spokesperson from “Team Rocket”, agent Ray Newman, one of several people representing the native of Wilkes-Barre, Pennsylvania.

McNall was so excited by this initial meeting he went on an intermission of a Hockey Night in Canada broadcast from Edmonton and said the Argos were going to try and get Ismail to head north. McCarthy’s phone blew up with calls from his NFL connections, and he was quick to point out to doubters that nobody thought it was possible that McNall could trade for Wayne Gretzky to play for his L.A. Kings either.

In that era of the NFL there were no guaranteed contracts. Any team could renege on a deal at any time. This played into the hands of McNall, who could offer Ismail a standard CFL deal, but also sign the player to a “personal services contract” outside of the football agreement. Also, since teams in Canada were allowed a “marquee player” whose contract didn’t count against the salary cap, there were options available to take advantage of these opportunities.

“I’m thinking that we’re going to give this kid the largest contract in the history of football the way they’re talking about things,” said McCarthy. “We had to convince Ray Newman that this offer is real. We would fly Rocket out to meet with Bruce and Ray. I said to Ray that I’m the middleman, not the money guy. For comparison, I sent all of the salaries of the highest first-round picks in the last five drafts to Bruce.”

One of the people the G.M. called was Rocket’s mother, talking to her about why the Argos were attempting to sign her son and to sell her on the merits of playing in Toronto.

The Argos flew Rocket to L.A., then to Toronto, giving him the opportunity to go out for a night on the town with some of his prospective teammates. The group had done everything it could think of to convince him to head north, including offering him a life-changing contract.

The deal was a reported four years for $26.2 million dollars, $18.2 million of which was guaranteed. His base salary for 1991 would be $4.5 million. There were also incentives based on crowd size, and a chance to become a co-owner.

To compare how enormous the contract was, Jerry Rice of the San Francisco 49ers, who led the NFL in catches, receiving yards and touchdown catches in 1990, was due to make an even $1,000,000 in 1991. At the time the deal was signed, Rice’s teammate Joe Montana was the highest paid player in the league at $3.75 million a season.

The New England Patriots initially held the No. 1 overall pick but were not willing to pay Ismail’s hefty asking price. Just two days before the draft the Patriots dealt the pick to Dallas, who was poised to select the receiver if the two sides could come to terms in advance. According to the Los Angeles Times, Ismail wanted a five-year, $14.5 million deal from the Cowboys and owner Jerry Jones said no.

That cleared the path for Ismail to head to Toronto.

“What we accomplished over a five-week period was insane,” recalled McCarthy. “When Jerry said they weren’t going to give him that money I said now it’s time, get Rocket and get the deal done.”

They had several contracts to sign; a standard CFL players contract for roughly $100,000 a year, and a series of four one-year personal services contracts with McNall where Ismail would make the megabucks.

So now it was hurry up and wait. McCarthy’s role was essentially done so he and his family headed to Fripp Island, South Carolina for a few days of rest and relaxation. All he wanted were updates on how things were going, which were provided every four or five hours. The plan was to get the deal done on Friday, the eve of the NFL Draft.

“They came to an agreement, they got Rocket on a plane to Los Angeles to see Bruce and sign the deal. It was announced on ESPN by Chris Berman the morning of the draft,” the day after pen was put to paper.

While in South Carolina, McCarthy received a call from Washington G.M. Charlie Casserly, who wanted to know the specifics of the deal, particularly how many years it was for. His team had the 17th pick in the draft but was interested in drafting him in a later round in case things didn’t work out in Toronto. The longer the deal, the longer they would wait to take a flyer on a Rocket (the Raiders would use their fourth-round pick, 100th overall, to select him).

When the deal was done McCarthy was obviously happy, but this experience wasn’t entirely new for him as he spent three seasons working in the USFL, a league that made a habit of signing players away from the NFL.

This one was different. Stealing the presumed No. 1 pick the day before the draft was not received well by those in the NFL, who had seen this movie before when the USFL signed some of the top college prospects like Reggie White, Herschel Walker, Steve Young, and Jim Kelly, as well as a kid from Boston College named Doug Flutie.

But none of that mattered. On April 20, 1991 the Argos had their man, and it would be a decision that would pay off greatly over the next seven months.