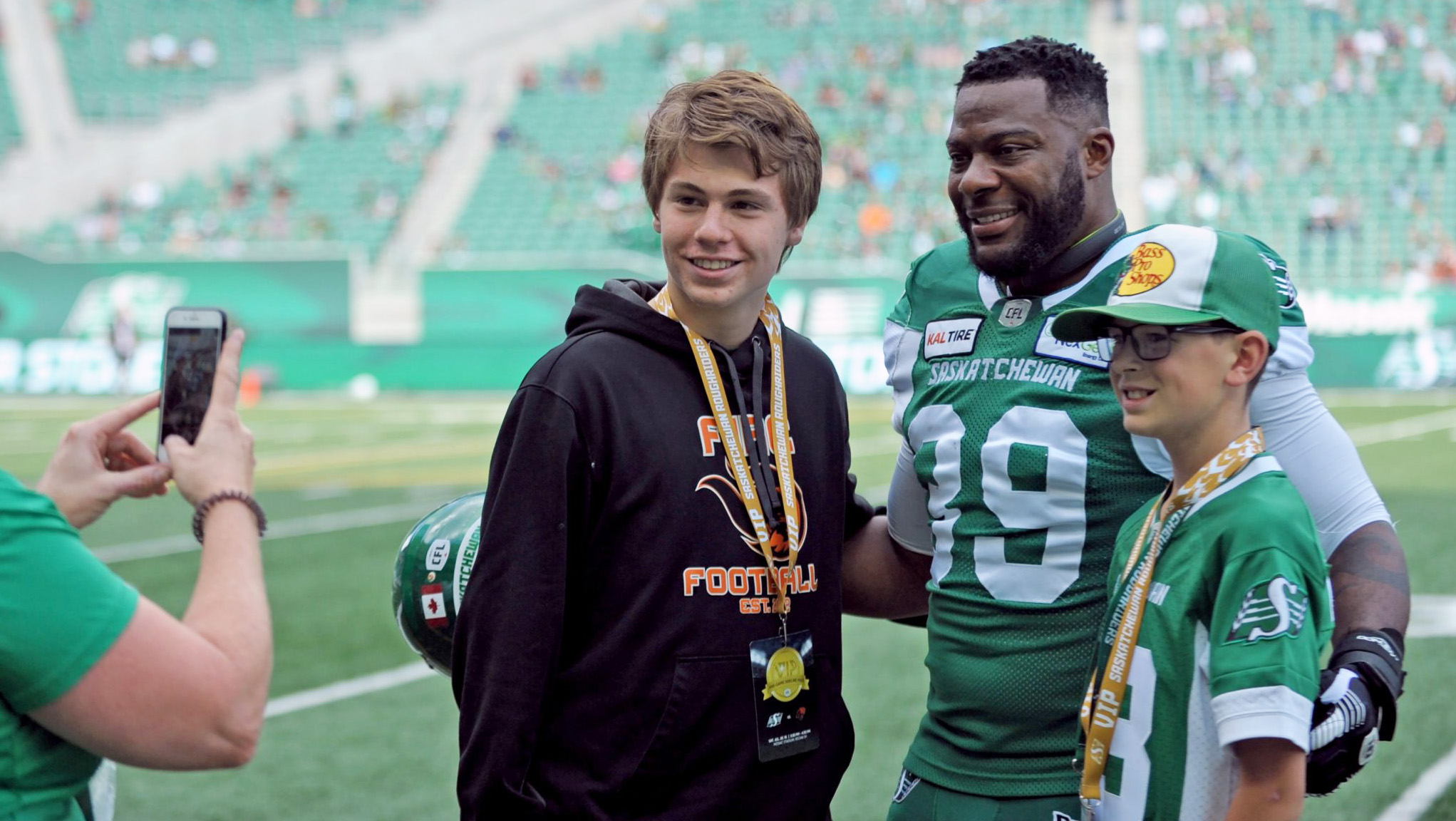 It was a day where Charleston was just being Charleston.

Few CFL players are more Twitter-friendly than Charleston Hughes, the defensive end who signed with the Toronto Argonauts as a free agent back in February. It was during this particular Twitter session that he happened upon a Tweet posted by the Argos with a link to a story on Argonauts.ca.

“I was scrolling the internet and I came across the story about getting people in First Nations communities more into football,” he explained. “The crazy part is that for the last two or three months I’ve been working on that same thing.”

Hughes trains young athletes in Regina, the city he now calls home. The former Rider spotted a couple of kids with some athletic upside and it got him thinking big picture instead of specifically focusing on the youngsters he was working with.

“A couple of the kids are really good athletes, they’re Indigenous kids,” adding they weren’t from families with a lot of disposable income. “I found sponsors for the kids to come out to my camps. They go through my athletic training and football-style training. I came to find out these kids are great athletes, some of the top athletes I’ve had in those groups, especially in their age range.”

On the field, Hughes has built a reputation as being one of the league’s smartest players. His in-game adjustments have helped him lead the league in sacks in each of the last four seasons. He used that part of his brain to look at a situation presented to him and how to make it work to his – and in this case others – advantage.

“I’m thinking if I can go to First Nations communities and try to find athletes and give them the same opportunities that other kids have, I might be able to build something.”

But what to build? As most great players do, Hughes put together a game plan. He needed to have the Indigenous community as the main component of his initiative. Sports, ideally football, had to be a key element. The idea eventually came to him – to field an Indigenous junior football team.

The team would be ideally be based in Saskatchewan, but he’s also open to the idea of placing another one in Ontario or Quebec.

“What I mean by “Go mad” is to be able to go out and make a difference in the world. That’s one of the things I want to try and install in the kids is to use this sport as a steppingstone in your walk of life. Whatever your goals are, you’re going to use football to achieve your goals.”

Hughes added that whether an athlete’s goal would be to play professionally, play for an American or Canadian university team, or simply to be a part of the team and find a career path, he’s willing to do his best to help. The Northwood University product wants all of the players to attend university or college and work while they’re earning their degree, all while committing to the program Hughes will call “Northern Lights Football.”

The lineman spends his off seasons on this side of the border. He grew up in Saginaw, Michigan, and draws from that experience when explaining his intense desire to give back to kids.

“I didn’t play (organized) sports when I was young. Baseball would be a broomstick and a tennis ball in the middle of a field or a parking lot. Basketball would be in a park with a rim with no net. Football would be in the middle of a street. We didn’t really have the type of training that I can offer to kids that don’t know how to play a sport, or don’t even know how to run properly. Those are things you need to be taught over time. I didn’t have stuff like that when I was a kid.”

That explains why he wants to work with disadvantaged kids, but the question remains, why does he want to deal specifically with Indigenous youth?

There are a few things that need to be finalized. He’s run the idea past the CJFL and says talks were positive. A community willing to field a team must be determined, and then there’s the thing that’s always needed when trying to transfer a concept to reality – money.

He says he’s more than happy to take on a sponsor.

“If there’s anybody out there that feels like I do and has a passion to want to help others to see improvement in an area where I see improvement is really needed, then we can join forces and make this work the best way we can. I’m always looking for suggestions on how to make things better.”

With his commitment to the community, it sounds like Hughes is going to fit in with the Argos just fine.