It’s finally everyone’s favourite weekend (other than Grey Cup weekend, of course) with heated battles happening all across the country. With storylines galore and plenty of players to watch (you can check out my 11 players to keep an eye on this weekend here), Friday night can’t come soon enough as we kick things off in Ottawa with a battle of two East Division teams.

Who doesn’t love the Riders/Bombers rivalry? We’ll be treated to that on Sunday.

And finally, with two provincial battles on Monday (Toronto heads to Hamilton for the battle of the QEW while the two Alberta teams, Edmonton and Calgary, matchup later that afternoon) on tap, CFL fans should be pretty excited for a football-filled long weekend.

I can tell you something else I’m excited about, and it’s that I had a great fantasy outing from BC Lions QB Michael Reilly last week against the Ottawa REDBLACKS. I was in the stands during this game – yes, I did sit through the rain until the final whistle because leaving a CFL game early is absolutely out of the question – and while I wasn’t cheering for either team to win, I definitely let out a few quiet cheers for Reilly every time he made a completion.

And did I get so excited when the Lions got down near the goal line because I knew it was Reilly territory and I knew he’d get me a fantasy TD? Why yes, I did.

Here’s the rest of my CFL Fantasy presented by Casumo team from last week: 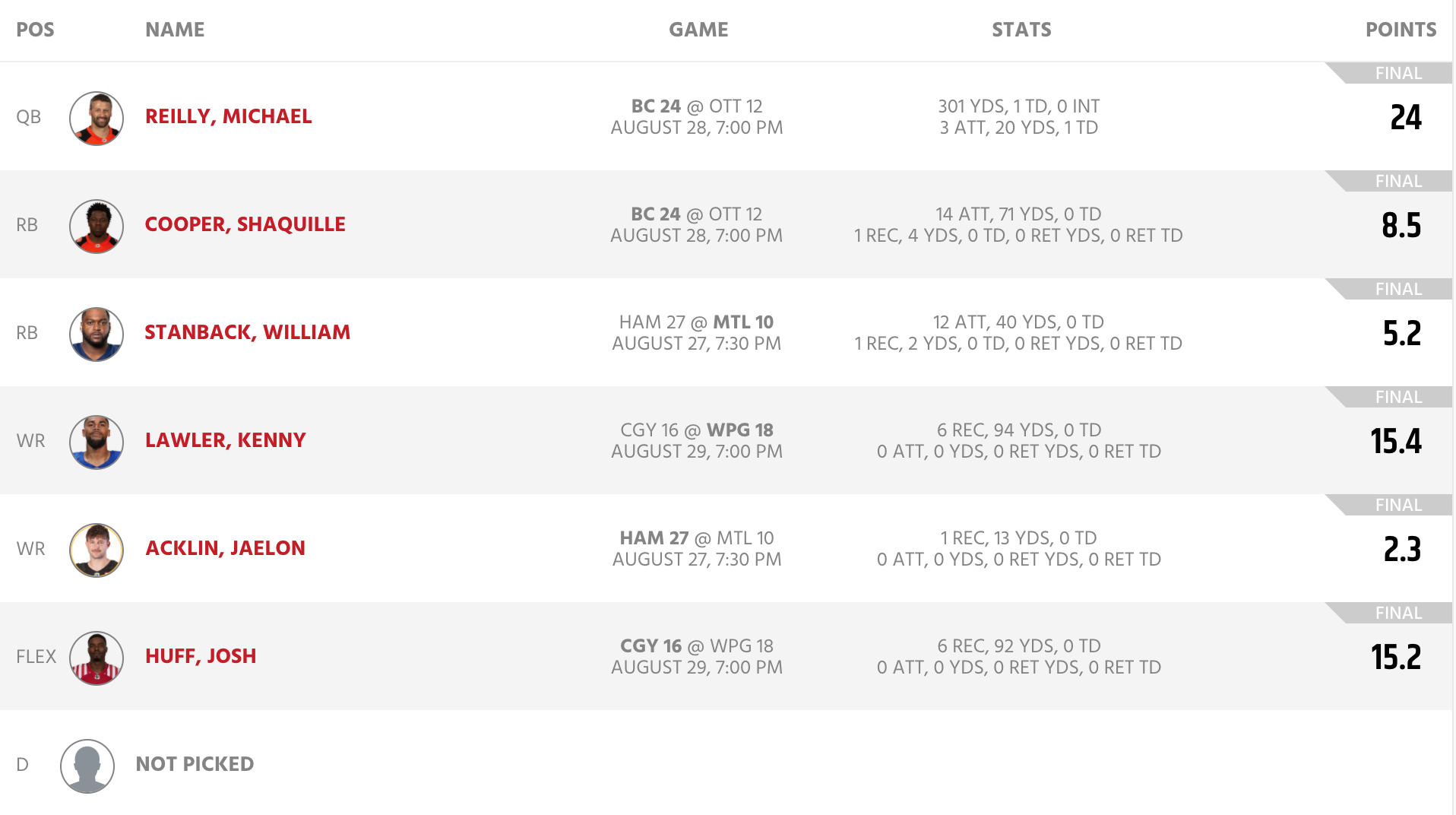 I’m rolling with Nick Arbuckle this week at quarterback, along with James Wilder Jr. and Ka’Deem Carey as my two running backs.

Rasheed Bailey has become one of Zach Collaros‘ favourite targets and fresh off of his first-ever 100-yard game, I’m hoping he has some more of that this week.

Ricky Collins Jr. is my second receiver (let’s hope for an Arbuckle to Collins Jr. touchdown in Hamilton) and for my flex, I went with Ryan Davis. He’s only $2,500 and he was catching passes (he hauled in eight of his 11 targets) and running the ball (three carries for 12 yards) last week for the REDBLACKS. The value is definitely there. 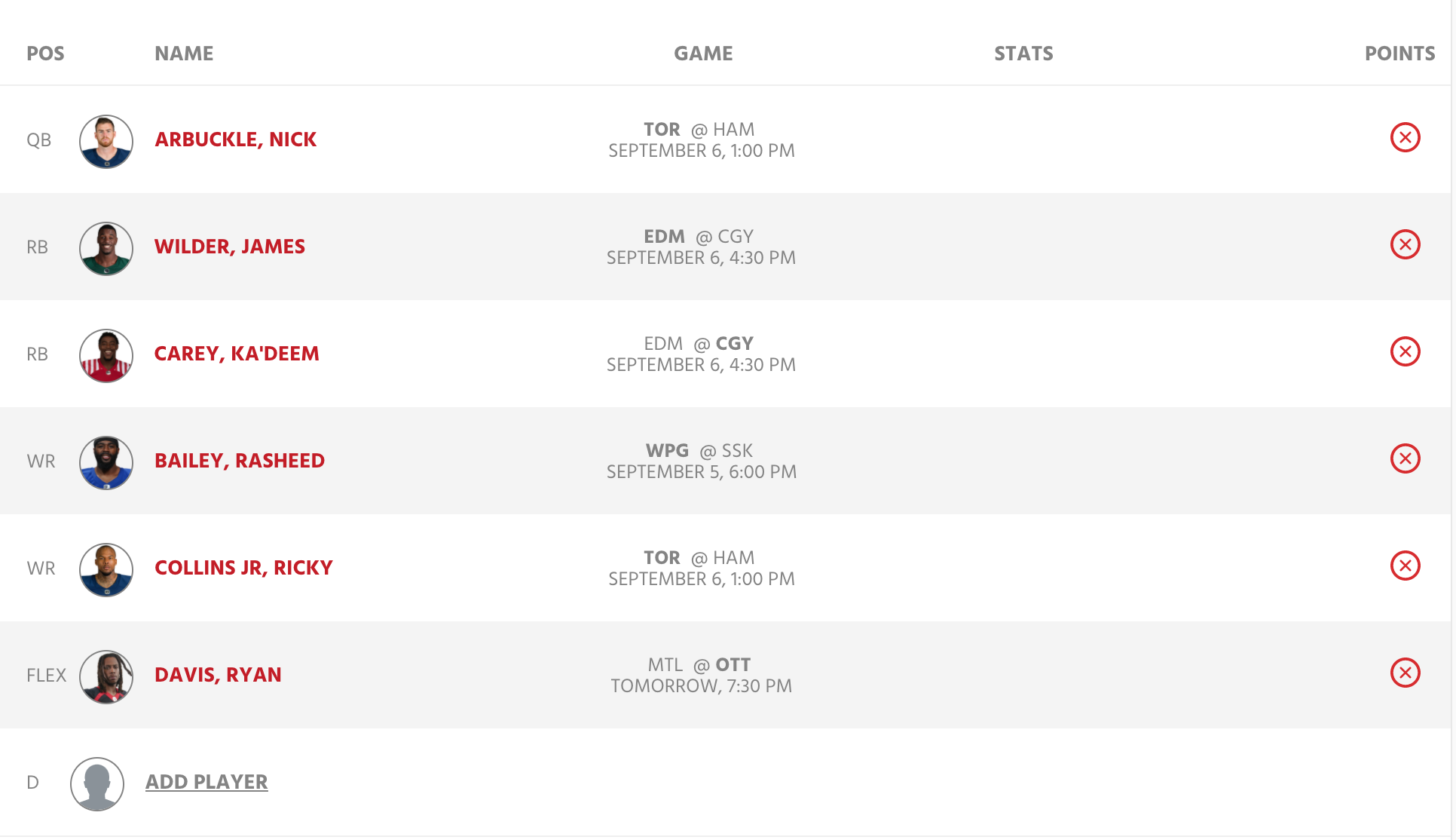 These two teams are in a bit of a slump, so something has to give for one of them. If the REDBLACKS defence can keep Vernon Adams Jr. and co. off the score sheet and if Matt Nichols gets his offence going (or if Lewis Ward does what Lewis Ward does in the field goal department), I can see Ottawa walking away with a win.

How do you bet against Saskatchewan hosting a Labour Day Classic? You don’t.

Listen, I know that picking against the Ticats on LD Weekend in Hamilton sounds like a bad idea, since the last time Toronto won this game was back in 2012. BUT, I just have a feeling that Nick Arbuckle is going to have another big game for the Argos. And we love an upset, right?

I liked what I saw from the Stampeders last week with Jake Maier under centre. He looks comfortable and if he can get things moving, and if the Stamps offensive line can keep that Elks defensive line away from him, I think Calgary has a great chance to take the first of the home-and-home series.

And finally, here is a GIF of Bryan Burnham with the same feels that most BC Lions fans are feeling right now since they’re not playing this weekend.