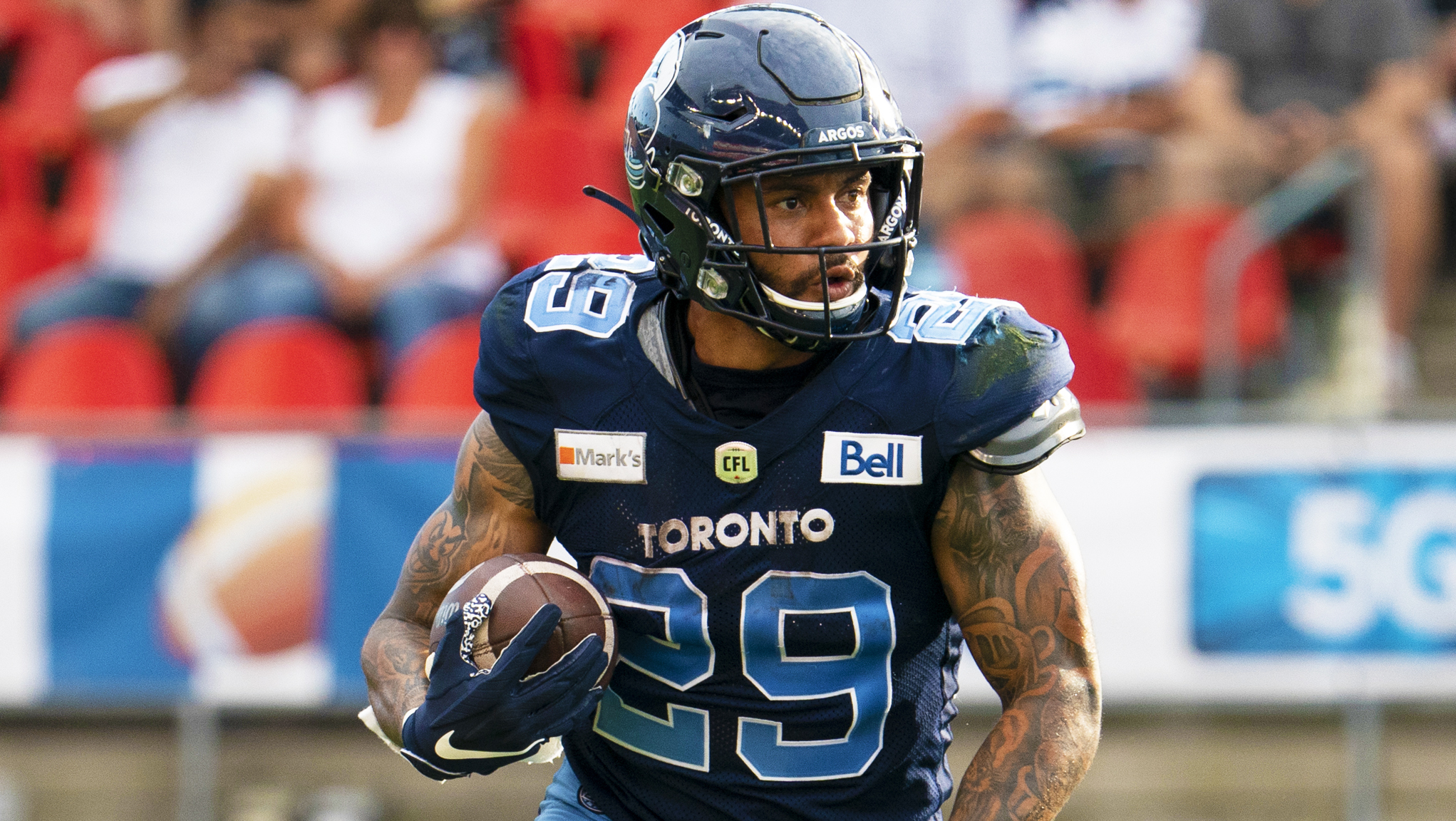 TORONTO — Just over a month ago, D.J. Foster was sitting at home contemplating his next move.

He was almost ready to give up on the game that he loved so much until the Toronto Argonauts came knocking.

“It’s been a crazy month,” Foster told reporters following his first CFL game. “I was back home just sitting on my butt and I was so blessed to have this opportunity. I just want to thank God so much because I was at a point that I was kind of done with football and trying to move on to the next chapter and I was fortunate to have this opportunity. I’m just so happy to be here.”

Foster was a late addition to the Argos training camp roster, signing with the team on July 19. He wasn’t quite ready to play in the first two weeks of the campaign, still needing some time to pick up the little nuances of the CFL game and to learn Toronto’s playbook.

After taking a few extra weeks to absorb as much information as possible, the 27-year-old was added to the roster for Toronto’s home opener, the back half of a home-and-home against the defending Grey Cup Champion Winnipeg Blue Bombers, and suited up for his first game in the CFL.

The six-foot, 205-pound running back hit the field and was a massive part of the Argos offence that helped the team to a 30-23 victory. He rushed for 101 yards and scored a touchdown while also hauling in a 14-yard pass in his debut.

“To be honest, no not really,” Foster said when asked if he had any idea he’d be such a big part of the Argos offence. “I mean, they were giving me the opportunity this week. We had some packages and stuff so I just kind of took it and ran with it. It was fun. My teammates motivated me. I know that the run game was a big part last week so I wanted to come in there and do what I could to continue that momentum, especially in the run game.”

His quarterback, Nick Arbuckle, who completed 23 of 32 passes for 310 yards and a touchdown, wasn’t surprised at all by the success of the running back.

“The 100 yards that he had today didn’t surprise anybody that’s been in the locker room with him since training camp,” said Arbuckle. “Unfortunately he was a little bit slow getting onto the roster because he wasn’t with us when training camp started. He was a late addition.

“He was playing catch-up with our offence in training camp and wasn’t quite ready Week 1 of the season but he kept learning, kept getting better, kept learning the game, the CFL game, and adjusting to the little differences that happened. So when we finally got to get activated to the roster this week we all knew he was going to be set up for a big game.”

Foster wasn’t the only player on the Argos offence that was contributing on Saturday. DaVaris Daniels hauled in 100 yards and a touchdown before leaving with an injury in the third quarter, Eric Rogers caught 62 yards, Ricky Collins Jr. had 52 yards (including a 43-yard gain) and Canadians Dejon Brissett and Kurleigh Gittens Jr. both got in on the action, hauling in 51 and 23 yards, respectively.

But it was the rookie Brissett that really caught the attention of Arbuckle following the team’s win, who may have a bigger role in the offence moving forward if Daniels isn’t ready to return next week.

“Dejon came in, this is first season and he was the backup for four different receivers in this game,” said Arbuckle. “He has to know the entire offence, with every single position, every motion, every hot route that we have, he knew everything, everywhere on the field. Then DaVaris goes down and he has to come and step up and play the outside receiver position, which he never played in training camp and he almost scored a touchdown. I think it was one of his first drives on the field I think he was scared of the end zone, he fell down, didn’t really want to score (laughs). He did his job and he made everything happen that he was supposed to.

“He made some big plays for us and we expect him to continue to step up if we don’t have DaVaris back five days from now, Dejon is going to be a big part of this offence and he’s going to play a big role. Him and Kurleigh (Gittens Jr.) are young guys in this offence and both of them made great plays on the field today.”

Next up for the Argos is another home game next Thursday at BMO Field when they welcome the Edmonton Elks.