Raise your hand if you haven’t missed a snap of CFL football so far in 2021.

The return of on-field action has been everything we’d hoped for, unless of course your team isn’t off to a hot start or you were expecting high-scoring shootouts.

Unfortunately, I can’t do anything to fix the first concern, but it is worthwhile to take a look at the most important question in any investigation – why – when it comes to the second.

Why aren’t teams scoring the way we usually expect in the CFL?

Why are defences ‘ahead’ of offences right now as everyone keeps suggesting?

Why should I believe that any of this is true and it’s not just a slow start for offences that we see each year?

All of these are fair questions and while we might not reach a concrete answer on any of them, they’re worth thinking about as you soak up Week 3 action beginning Thursday with BC and Edmonton, as two teams struggling to find consistency will lock face masks.

To get a sense for just how ‘off’ attacks have been through two weeks in 2021, I went back to the last start of a season in 2019 and looked at matching measurements to determine how different the numbers suggest the point scorers are.

The number of plays being run per game and pass play call percentage are almost identical, nullifying the idea that tempo, conditioning or play calling are to blame for a lower scoring output.

The push-pull relationship of yards in air and yards after catch remains stable with one notable point. While watching games back and tracking every throw from every game I’ve noticed – what felt like – an above average number of throws at or behind the line of scrimmage. I ran the numbers and it turns out offences are more timid than ever through the first two week of 2021 with 20.1% of passes being attempted at or behind the line of scrimmage compared to 16.3% in 2019.

When we expand the depth of target to 10-yards down the field, the numbers become even more significant with 66.3% of passes being attempted at or below 10-yards down the field compared to 61.5% in 2019. This means that despite a big, wide, beautiful field to pick apart, two out of every three pass attempts aren’t travelling as far as your kid can skip a rock at the cottage.

My best educated guess is that offences are looking to find their rhythm again before getting comfortable taking shots down the field and creating the textbook explosive plays that win games in the CFL. Combine that with the coach-QB pairings of Jason Maas-Cody Fajardo in Saskatchewan, Trevor Harris-Jaime Elizondo in Edmonton, Buck Pierce-Zach Collaros in Winnipeg and more, you start to realize offensive systems could be playing a role in the early-season reluctance to truly test defenders with consistency.

Completion percentages are up this year with a slightly lower depth of target from 2019 while production grade per snap and points per game have dropped significantly thanks to some ridiculous games (64-14 Hamilton over Toronto, 44-41 Ottawa over Saskatchewan) started out 2019.

Take a look across the CFL and you’ll realize just how much fluctuation and turnover there is in experienced offensive personnel. No team has been able to avoid the challenges of a COVID-influenced season.

Old friends getting acquainted again in Edmonton, Hamilton working in fresh-faced protectors with injured receivers waiting to get right while Saskatchewan scrambles to find answers on the offensive line. A system, head coach and quarterback ready to hit the ground running in Ottawa, but the team also needs some time getting everyone else up to speed, a Stampeders receiving core looking for an identity after years of high-end production left for Toronto only to return and get a comeback win at McMahon.

Are defences ahead? Maybe, but I believe the true answer is offences are behind.

You might think that’s just semantics, but there is a difference. Not to take away from anything defensive coaches and players have done this year, but the time it takes for offences to establish communication, comfort and rhythm is taking longer than normal, and longer than defences.

Once that comfort is established offences will start to push the ball vertically again with regularity, in a league and game where those who wish to dare deep are shown to get statistically rewarded over time for their efforts, even if the efficiency isn’t there to start.

A few years ago I studied the location on a CFL field that returned the highest possible production grade. Turns out it was between 20-30 yards downfield right between the hash marks. 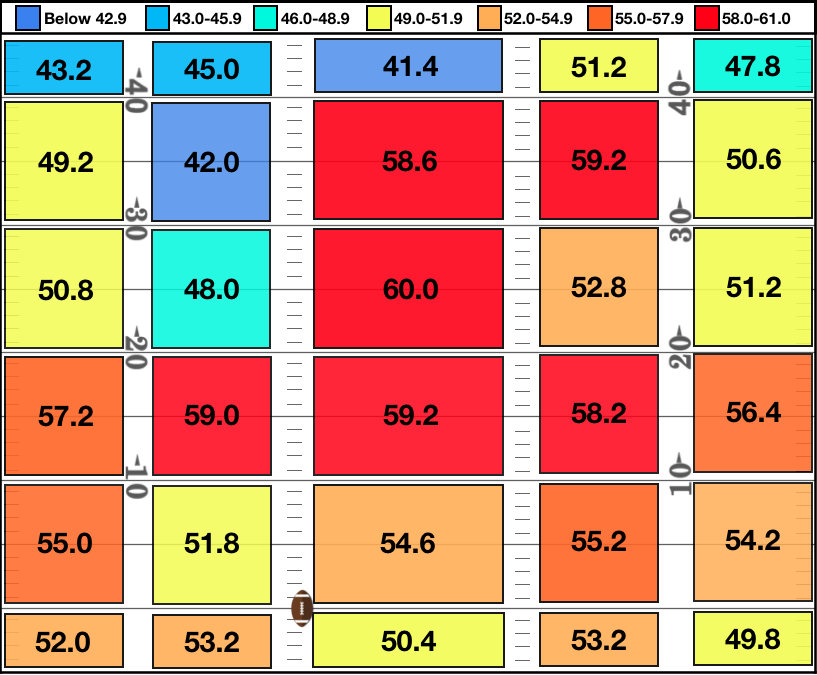 A place where only 2.1% of pass attempts have gone this season.

Give it time, the offences will find their feet and their will to hit on the big play. In the meantime, don’t forget there’s no shame in enjoying great defensive football, even if you are a fan of points. This is a much better alternative to this time last year.