The tulips have appeared, the days are getting longer and we’re all getting anxious for kickoff.

After two years worth of CFL Drafts unlike anything we’ve seen before, it’s finally time to begin turning our attention to the 2021 regular season. When it comes still remains a temporary mystery, but with each day we near the return of Bo and Reilly, Stanback and Harris.

Many established CFL names are healthier and more motivated than ever before due to the unrequested time away from their craft, but young players face a far different reality.

It’s difficult enough to make a CFL roster coming out of the Draft and contribute in any meaningful way. This summer a group of rookie players will attempt to do just that while stacked up against twice the competition, thanks to 2020’s Draft class being squeezed in for their first live reps in the same camp as 2021 draftees.

Think about how tough that is.

If you believe this is just a minor hiccup that won’t have real impacts on career trajectories, examine your own life path. Would you have the same job if your employer accepted twice the number of applicants? Would you have gotten into school if two years’ worth of high school students graduated at the same time?

Not only is the double draft class deep in numbers, they’re also a unique group of highly talented players. Many who deserve a shot in the CFL from Day 1 will be squeezed from the roster. Some will end up on various lists within the organization, others will return to star at their U SPORTS school for one final season while still others could decide that COVID has forced their hand and say goodbye to the game.

With all these decisions starting to become visible in the distance, I can’t help but think about the roster battles that will inevitably create some difficult decisions for front office personnel across the league.

With that in mind, I wondered what an entire 46-man dress roster of exclusively 2020 and 2021 CFL Draft picks would look like and the thought experiment didn’t disappoint. We begin on defence. 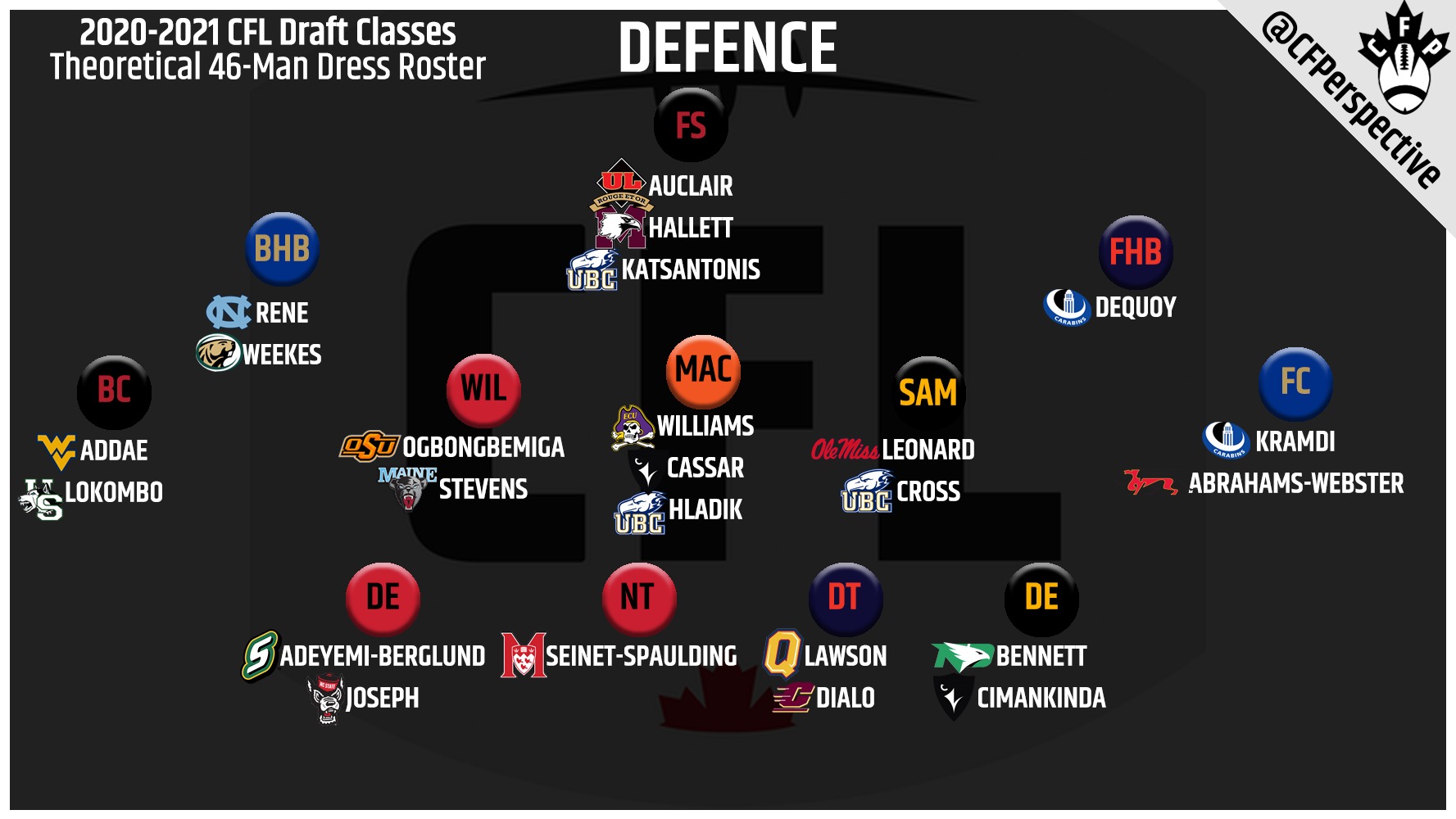 While the most difficult decisions here came across the defensive line and at free safety, there was nothing more enjoyable in this process than slotting linebackers into their homes. Putting Canadians at strong side linebacker (Sam) who you know could play the position if given a real shot was refreshing and the combination of any top-7 linebacker on this supersized rookie draft class dress roster would do the job admirably.

Three of Calgary’s four starting players selected for this roster happen to line up in the always dangerous triangle of nose, end and weak side linebacker. Perhaps a sign of positive things to come for the Stamps’ defence, with a renewed sense of Canadian youth and talent.

As for Ottawa, the REDBLACKS have prioritized defence in their first two drafts with offensive guru Paul LaPolice at the helm, with Marcel Desjardins making the final call. As a result their only two starting picks both feature in the defensive backfield with Auclair moving back to free safety where I see him excelling once Antoine Pruneau is done playing. 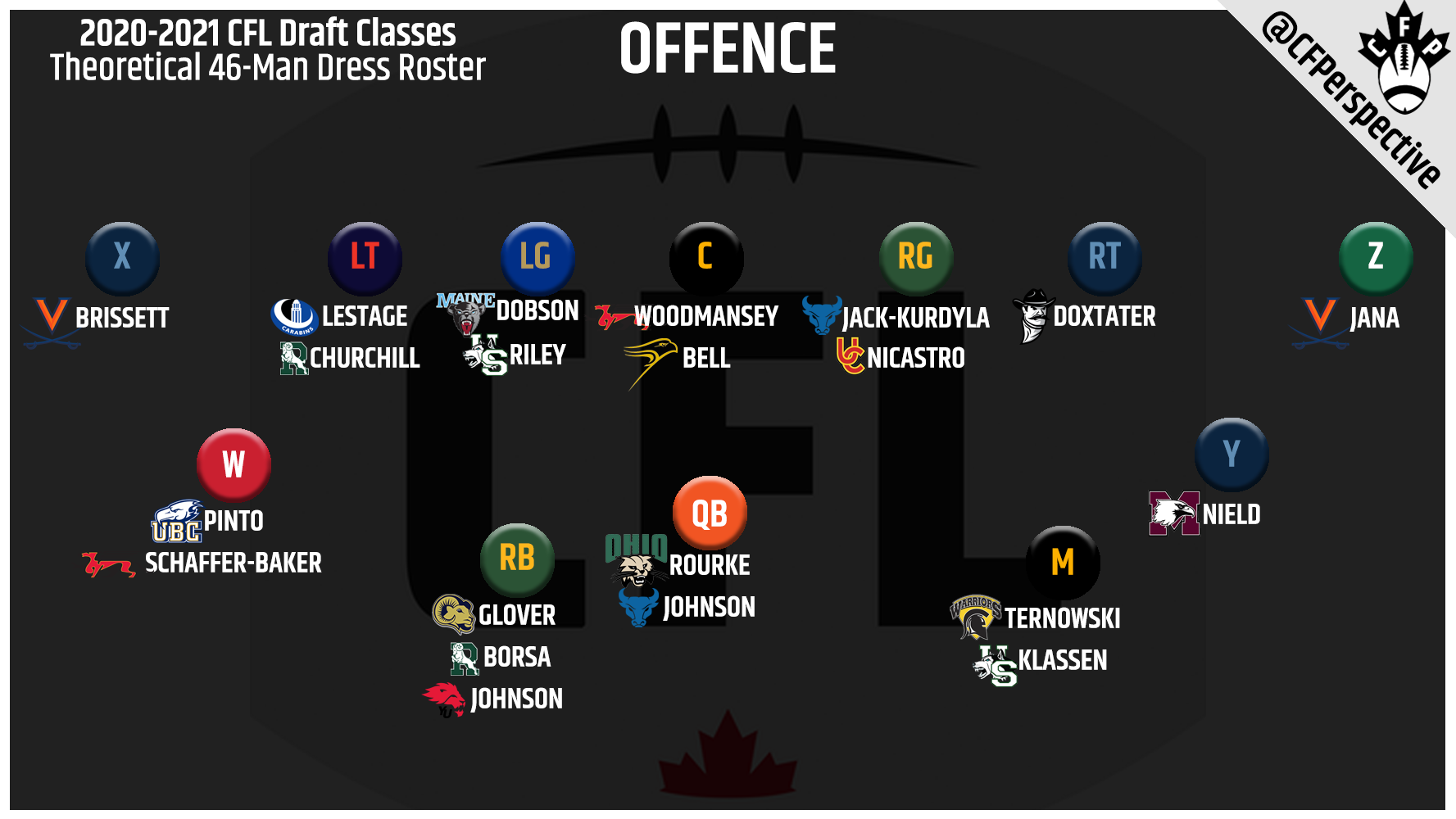 At quarterback I had to get creative with only Ohio Bobcats alum and Oakville, Ontario native Nathan Rourke selected in 2020. Thankfully Buffalo receiver Dominic Johnson of Windsor, Ontario was drafted by Edmonton and has quarterback experience, giving our imaginary roster size and flexibility.

Johnson might end up taking more imaginary snaps at inside slotback though as dynamic but diminutive Tyler Ternowski of Hamilton and Saskatchewan Husky Colton Klassen earned their spot with unique speed, quickness and catching ability.

Ternowski is joined on the team by Guelph Gryphon Coulter Woodmansey, just ahead of Laurier’s Bryce Bell. I’m not sure where Woodmansey will play, but he had to be prioritized on the roster somewhere.

Altogether, Hamilton led the way with seven overall selections with Toronto close behind at six, including a team-leading five picks on offence, while Ottawa and Winnipeg tied for second on defensive selections (four) behind only the Ticats.

One look at these fantasy rosters and there is no doubt the incoming double draft class is special. Oh, and there are 80 or so names I didn’t even get to mention.