There was a special vibe in the air last weekend at the 2022 CFL Combine presented by New Era.

Yes, it was great to be back watching elite athletes in person as they charge their goals with unbridled passion, but that wasn’t it. Was it the top notch food? The buzz of player interviews swirling through the Westin Harbour Castle in downtown Toronto?

All of these aspects played a part, but the overwhelming feeling from Wednesday onward was hope and positivity, much of it created by the presence of 35 athletes attending under the ‘global’ banner ahead of the Global Draft, which now coincides with the National offering on May 3.

The global players came to Canada with an open mind and an approach free of ego. They knew this was one of many stops on their international journey and just wanted to make the most of it. Player after player hit us with an emphatic ‘thank you’ after the smallest gestures of kindness.

Camaraderie amongst the group grew as the week progressed, culminating in global players cheering each other on during bench press testing from the back of the downtown Toronto ballroom we broadcasted from, and fierce one-on-one battles featuring helmets that most Canadian viewers of our CFL.ca live stream would never have been exposed to.

The international flavour raised the overall compete level of the 2022 CFL Combine and created a nervous energy I won’t soon forget. As the dust settled and I dug into the numbers, it turns out many of those polite, energetic and thankful prospects actually put up some nice testing metrics to pair with their on-field offerings. Here are the top five performances of the global showcase. 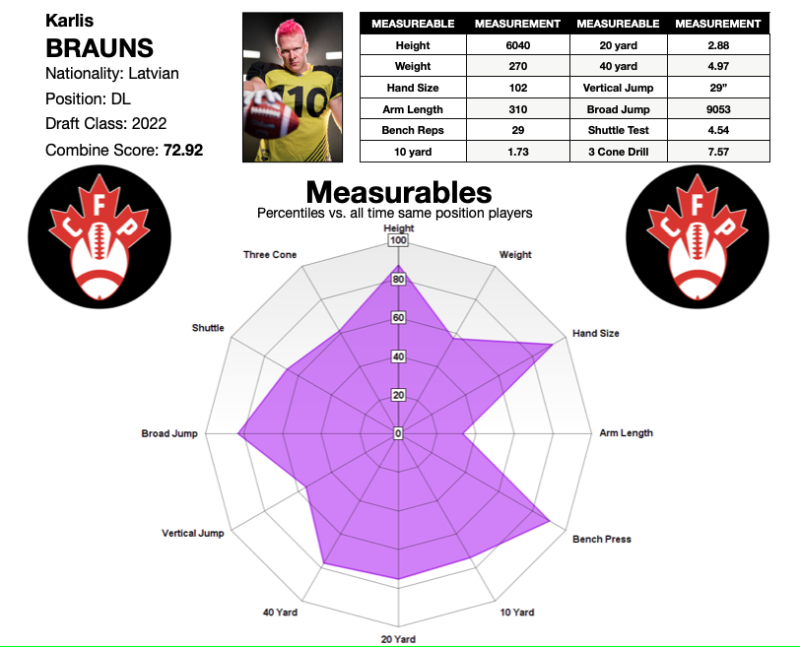 From initial handshake to body fat percentage and peacocking pink hair, no player was more memorable for overall experience than Latvian Karlis Brauns. While he remains a project like many global players, he is a project with a unique frame and surprising ability to run considering his frame and rigidity during on-field drills.

There is plenty to work with in Brauns and whichever CFL team takes him will be tasked with finding the right role to potentially get him on-field for opening weekend this June. 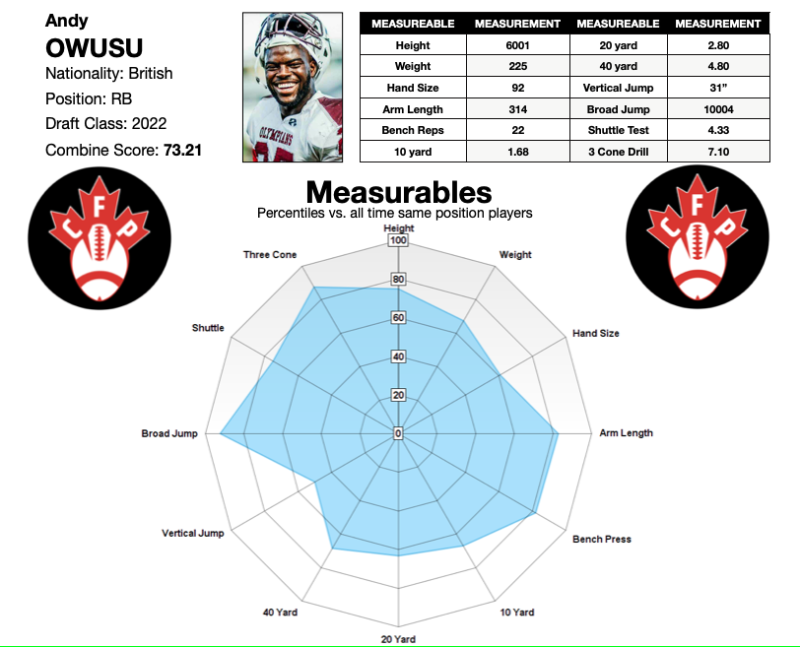 I met Owusu Thursday morning as he was rolling out at the hotel trying to shed jet lag and acquaint himself with the Eastern time zone. At just over six feet tall and 225 pounds, Owusu has the potential to grow into his large running back frame and run better behind his pads.

On the weekend he tested above CFL Combine averages for every test but vertical leap including 22 reps on the bench with one team representative telling me “he could run like a baby Jerome Messam if he figures it out.” 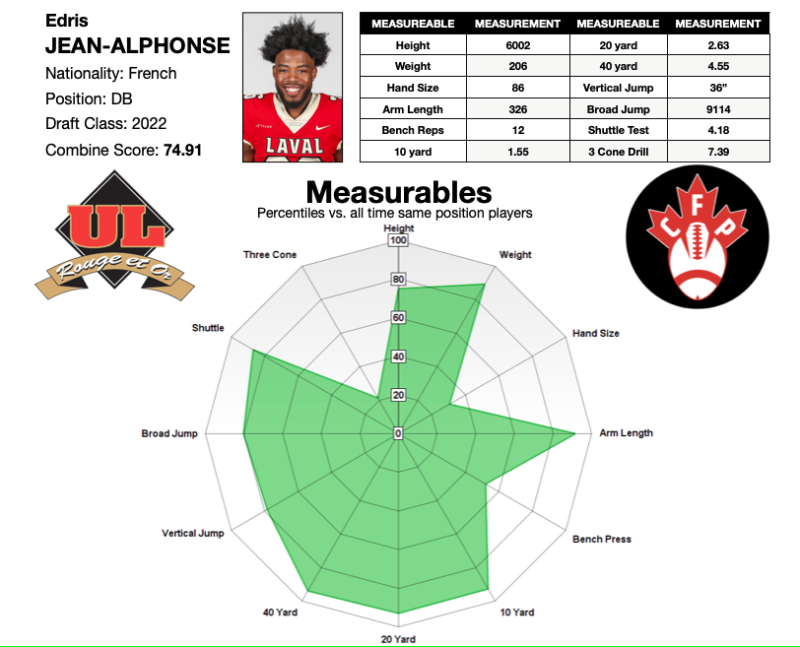 Edris Jean-Alphonse was the lone U SPORTS competitor amongst the global ranks this weekend but that wasn’t the only way he stood out. The Rouge Et Or product used his size advantage to dominate the vertical and broad jumps while running an elite 40-yard time.

With knowledge of the Canadian game there is no doubt the length and explosion of Jean-Alphonse won’t last long on May 3. 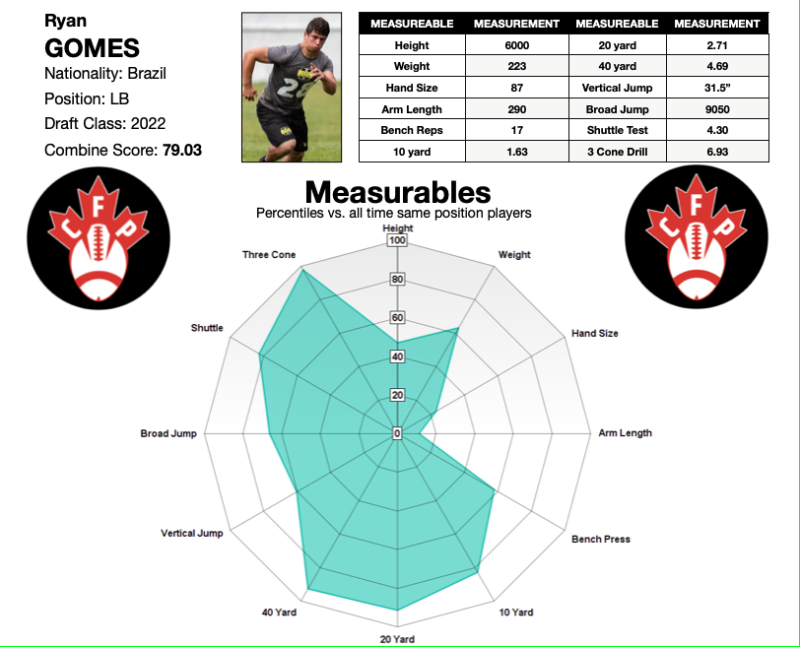 Previously signing with the Ottawa REDBLACKS for a short stint before getting released ahead of training camp, Gomes was much discussed entering the combine weekend as an under-the-radar tester who fits the Canadian game well and could give the same value to the team drafting him as a national, which at this point in the global program development would be a huge win. 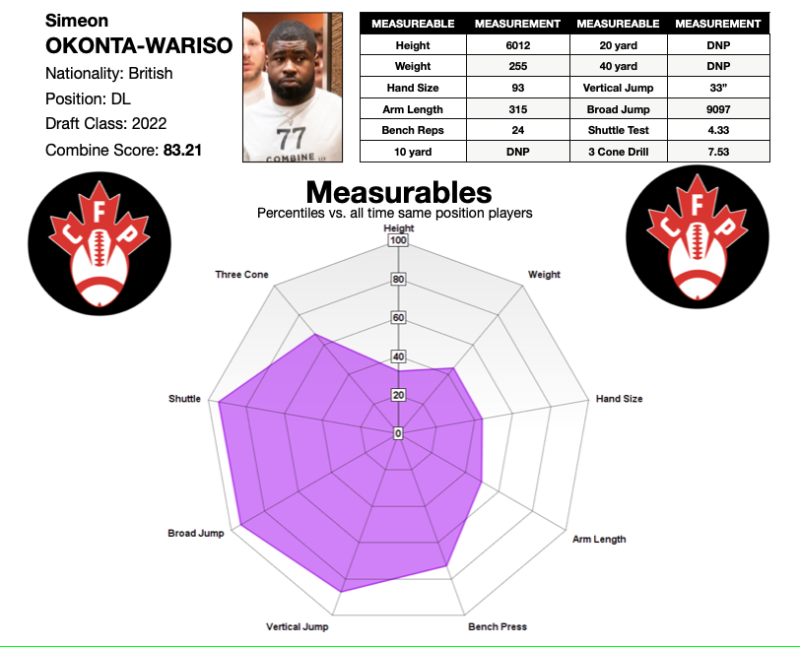 After announcing his presence with a strong Saturday night of 24 bench reps and a 33” vertical jump, Okonta-Wariso continued by adding solid broad, shuttle and 3-cone numbers. On-field he was one of the rare global players to be asked to take more reps by CFL coaches who wanted a closer look to sort out how he would slot into their roster. I see him as an undersized weak side linebacker and depth pass rusher with immediate special teams upside if he can grasp the concepts of leverage and spacing quickly in training camp.