As CFL Free Agency nears, the most interesting conversation – outside of quarterbacks – is often those on the receiving end of the offensive equation.

Pass-catchers are diverse in their size, style and ability, which makes finding the right fit and, most importantly, combination of fits imperative to offensive success.

Here’s a look at usage vs. production of the 2022 free agent receivers from last season as they made their argument for more money and targets next season. 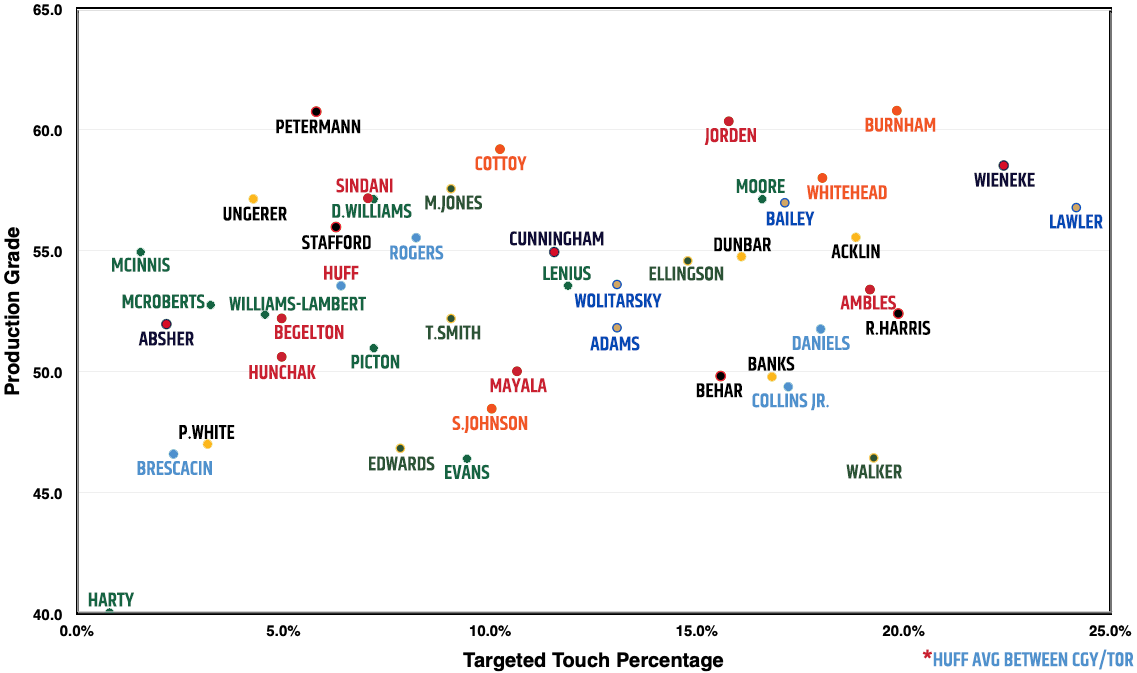 Unsurprisingly, the top right quadrant is full of elite names like Kenny Lawler, Lucky Whitehead, Kamar Jorden and the omnipresent Bryan Burnham, while some names surprisingly fall off in 2021 such as Shaq Johnson, Hergy Mayala, Derel Walker and Shaq Evans.

There is no doubt 2022 will be a hard reset for many of these players in what we hope will be framed in a package closer to what we are used to – training camp, pre-season, community events and the like – but 2021 is the most recent information decision makers have to judge these players under difficult circumstances. 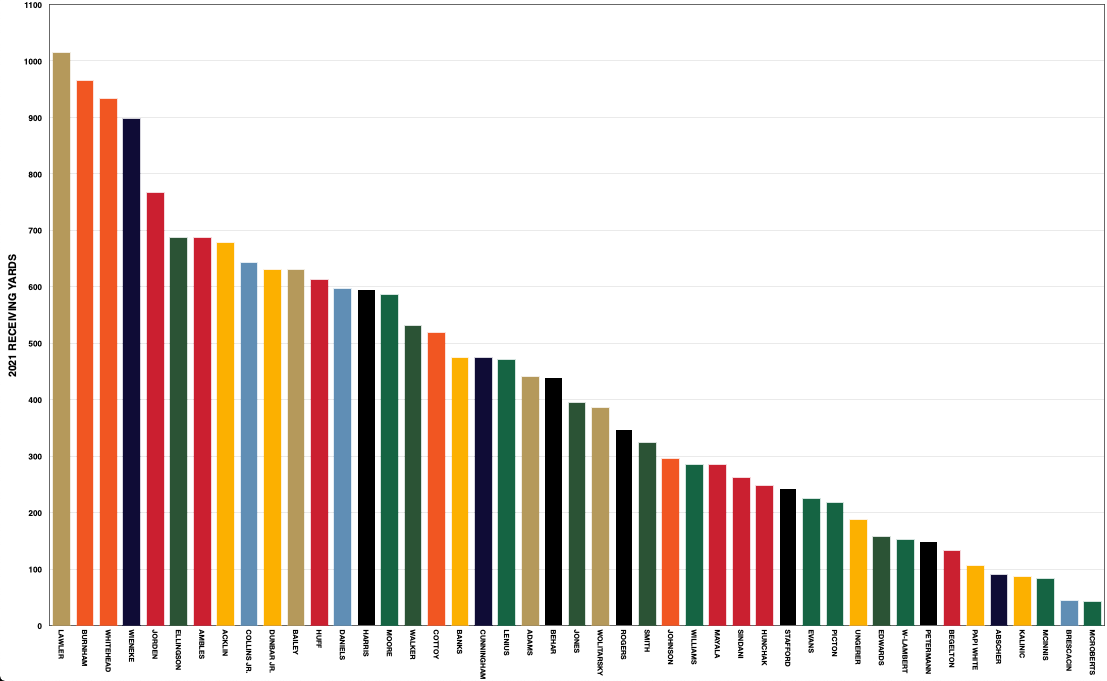 With that in mind, I believe there is extra respect earned by those who were able to stay on the field healthy after a year away – a credit to their training habits and body maintenance – not to mention those who were productive because this is at its core a production based business.

As seen above the elite receivers were able to get near – or in the case of Kenny Lawler just over the 1,000 yard threshold despite fewer games and challenging surroundings – and the way they did it was anything but uniform as seen in the yardage gained via air yards vs. yards after catch below. 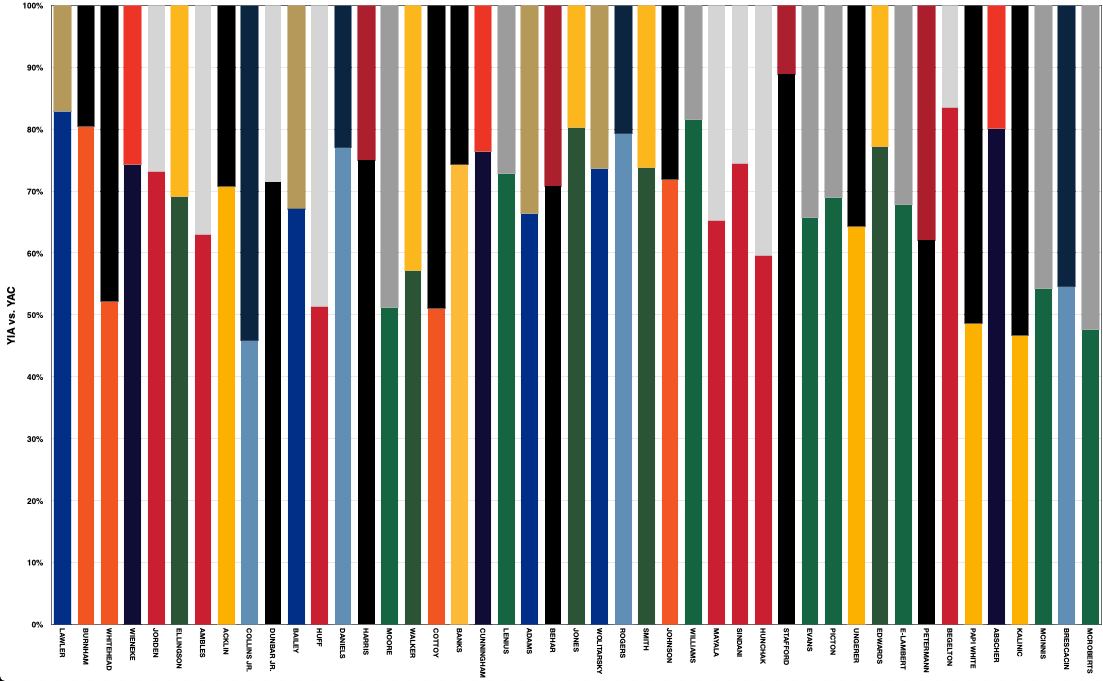 Want a deep threat to hit home runs with? Duke Williams and Kenny Lawler might not match your budget, but how about a Kenny Stafford, B.J. Cunningham or Mike Jones?

Roster construction this time of year requires all of these questions and many more to build a team coaches and executives feel comfortable in. Let’s take a look at my top 20 available pass-catchers.

In a less balanced offence without names like Eric Rogers and D.J. Foster stealing score zone targets, I believe Daniels could be a difference maker in the right fit, perhaps as a smart replacement to Whitehead in BC if he were to leave?

Under appreciated, but productive. Dunbar isn’t a household name yet but a couple more years of development similar or greater than his 2021 and you’ll know plenty about him.

Every year I put together the efficiency chart and every year Daniel Peterman has high production with limited touches. On a play-to-play basis he gets yards and moves the chains. Someone will realize that in 2022, Ottawa or elsewhere.

This might seem crazy low for the 2019 MOP award winner, but the production wasn’t there in 2021. Not just to his wildly high standard of 2019, but to a plethora of receivers around him. Banks hasn’t lost a step in my opinion, he just had an off year as the Ticats offence struggled to find their flow resulting in this ranking.

Rogers remains one of the CFL’s best score zone targets and can instantly change the complexion of any defence with his jump ball abilities, but where is the right fit?

One of the pleasant surprises of 2021 for me was seeing Mike Jones out pace the vaunted trio of Greg Ellingson, Derel Walker and Armanti Edwards in Edmonton. His Labour Day film alone should make someone unexpected chase him down.

In a year where the conversation in Calgary revolved around lack of healthy big play receivers, Ambles stayed on the field and stepped into a much larger role resulting in an attractive resume to negotiate with in February if Calgary lets him walk.

He was the star in the CFL’s worst offence last year. Does RJ stay put and hope things get better or leap to a secondary role on a more talented receiving group?

He’s a freight train with biceps and legs.. Jevon Cottoy is one of my absolute favourite players to watch in the CFL and it just happens to be a bonus he’s Canadian.

Before falling to injury, Moore was the lifesaver in Saskatchewan’s passing attack. The question becomes how much of Cody Fajardo’s deep ball struggles can be pinned on OC Jason Maas, Fajardo, or the team’s best receiver pre-Duke Williams being a smaller player.

Big catches, deserving of more volume and willing to muck it up more than you would expect for a player of his frame, Bailey is one of the rising value players at any position heading to kickoff in 2022. Will the Bombers prioritize him or be pushed off the wage scale by a team who thinks Bailey can be a difference maker for them?

Length, hands and a sneaky nasty competitive streak, I expect Acklin to be back in Hamilton, but be weary of Shawn Burke pairing him with either Jeremiah Masoli or Dane Evans in Ottawa..

The Greg Ellingson of 2021 was not the Greg Ellingson you or I know and love. He will return to form in 2022, but does he want to do it in Chris Jones’ and Stephen McAdoo’s ball control short passing attack or go be explosive for somewhere like BC as Micheal Reilly refuses to stop throwing the deep ball with accuracy?

Touchdown Jake has set somewhat of an unrealistic standard on touchdown catch percentage, a fact that I’d be careful to base my investment in but I could see a score zone deficient team finding value in his potential.

Similar to Mike Jones mentioned earlier, Whitehead was one of the true shining stars out of nowhere in 2021. Now the free agent question becomes does he see his value increasing by staying in BC to grow on his receiver evolution or believe he can be a number one receiver elsewhere?

With all the discussion about Reggie Begelton, many people seem to have forgotten just how damn good Kamar Jorden is on a snap-to-snap basis. Calgary knows, and he should stay to pair with Begelton as one of the best tandems in the league.

I can’t imagine Saskatchewan letting Duke leave Regina in free agency. He filled a need for them in short order and displayed his ability to take any play to the house in the Western Semi-Final against Calgary.

He’s off the market, but Begelton is unquestionably on the Mount Rushmore of current CFL receivers and *fingers crossed* should put up eye-popping numbers in 2022 if he stays healthy.

It’s time to stop sleeping on Kenny Lawler or trying to explain away his success. Lawler plays the ball in the air as well as anyone in the league and is scheme diverse. 2021 was stellar, but 2022 could be iconic in the right system if it’s not Winnipeg.

He is, has been and will be the greatest receiver of this generation to me. Highlight reel catches, possession dominance, route running excellence and a drive that burns as bright now as when he entered the league. If Burnham ever leaves BC he’ll change the entire complexion of CFL football.