A few weeks ago I was sitting in a CFL on TSN Zoom call with various players and coaches from the BC Lions and Hamilton Tiger-Cats ahead of their week 14 Friday night football matchup.

BC needed a win to keep any realistic hope of a playoff spot — crossover or in the West division — alive. Hamilton was essentially guaranteed a playoff spot, but a win would lock it up with grander goals ahead.

As Matt Dunigan, Matthew Scianitti and myself began chatting with Ticats QB Jeremiah Masoli we bounced around health, family and some Xs and Os when suddenly the topic of the Grey Cup being played Dec. 12 in Hamilton came up.

Masoli sat up, his eyes lit up, out of nowhere a rare media-present smile washed across his face as he simply said, “it’s time.” 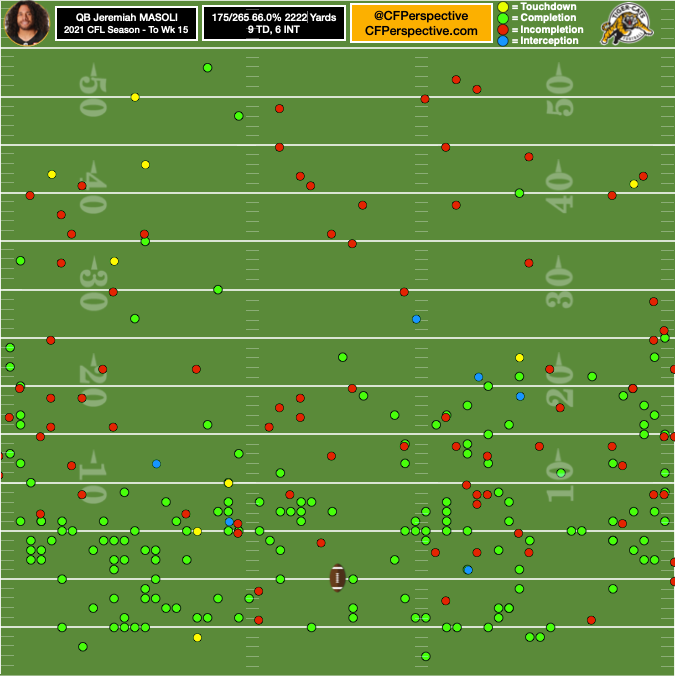 Masoli is soft spoken, thoughtful and at times guarded in his answers, but the thought of Grey Cup buzz building around the city lit fire to the conversation. Jeremiah began to explain how unique it is to live in a city that hasn’t hosted a Grey Cup his entire career — and well beyond. How seeing billboards and bus ads for the iconic Canadian football party was a constant reminder of what was to come and how spending the vast majority of his career in Hamilton made the possibility of playing in the classic that much more enticing.

Between the passion, the excitement and the pressure I’m not sure one player has been the perfect symbol for a team since I’ve been around the CFL.

The Ticats as an organization, from Caretaker Bob Young to the people taking parking voucher stubs on game day all feel what Masoli described and everyone knows, ‘it’s time.’

At this point you might be asking, time for what exactly?

Time to find answers, time to get into rhythm, time to grow more confident in those next to you on every snap. Time to spend the trust earned from coaches through a wacky COVID-shortened 16-week regular season and prove they chose the right players to accomplish the goal staring everyone in the face: Win the Grey Cup at home. 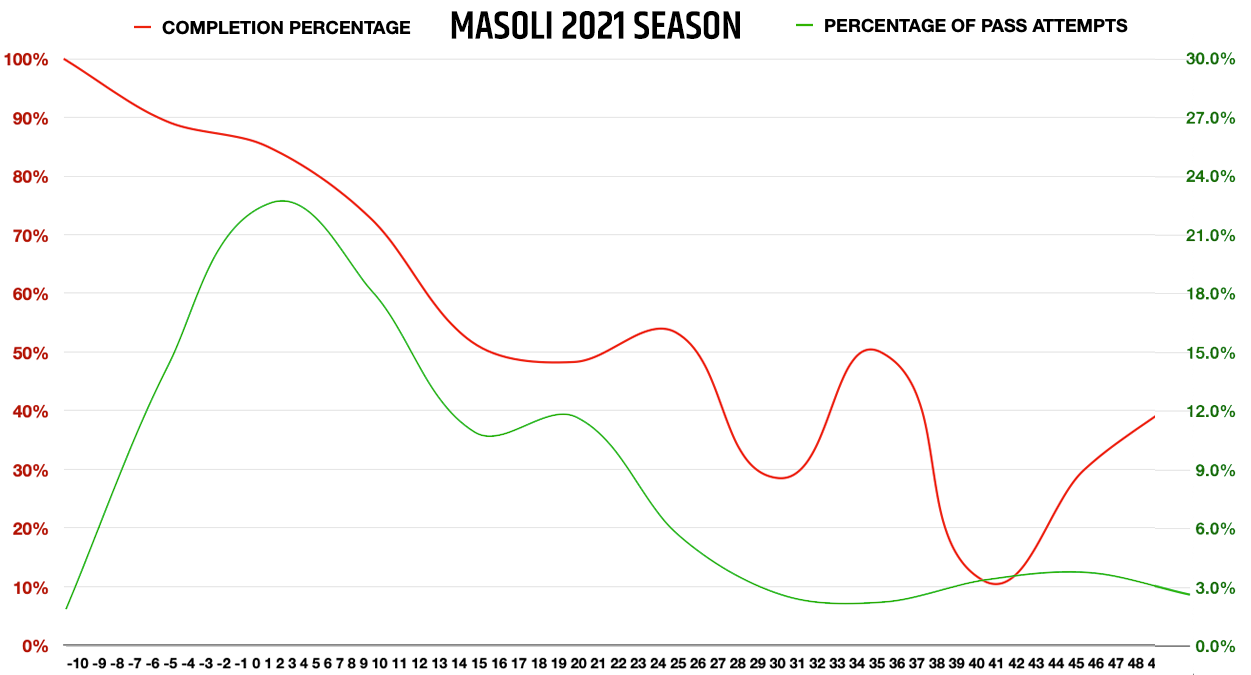 Masoli perfectly encapsulates the Ticats’ need to seize this moment as he gets pressure from all angles, external and internal.

While he’ll never admit to it, there is unquestionably a boulder-sized chip on Masoli’s shoulder. One that grew with each stop through college and the pros. Through Oregon as a Holiday Bowl champion to Ole Miss, a quick stop in the NFL, an opportunity in Edmonton and a trade East to the Hammer, Masoli rode the quarterback wave looking for work.

Now he stands in front of the Tim Horton’s Field faithful with 113 games played in Ticats’ Black and Gold. Attempter of 1,788 CFL throws, creating 79 touchdowns with footballs out of his right hand.

Buried behind the likes of Jeff Mathews, Jacory Harris and Zach Collaros, he worked his skills hoping he’d get the chance to prove he could lead a team. When June Jones arrived in 2017, Masoli was set for a standout 2018 season and he delivered. An ACL tear early in 2019, a pandemic-cancelled season and the emergence of a talented backfield partner in Dane Evans, combined with much hyped dud of a marquee matchup with the rival Toronto Argonauts and Masoli is suddenly at a crossroad in his career.

Lead the team to victory, glory, be forever remembered as the quarterback who put Hamilton back atop the CFL mountain and buy more time with the tough Ticats fan base. Or, fail to deliver on his ultimate goal and be pushed aside for the next great hope, just as he did to Collaros in 2017. 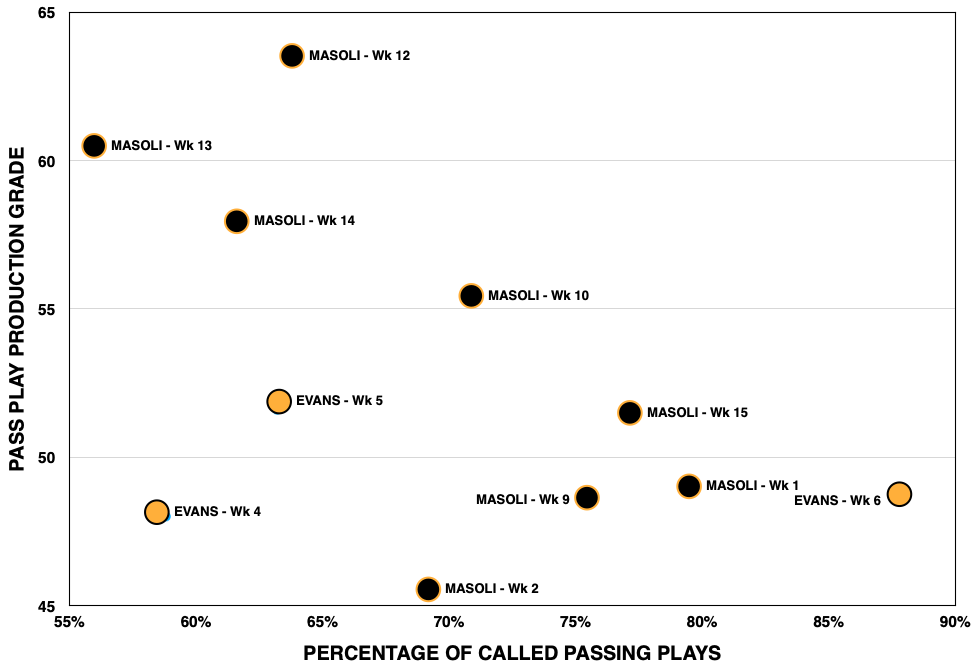 While the narrative is that Masoli can’t get it done and has been inferior to Evans this year, one look at their pass play production grade and pass play call percentage in starts this year shows Masoli was heating up through weeks 12, 13 and 14. But this is a business based in paying rent everyday, not sometimes and not when the conditions are right. Always.

So Masoli and the Ticats enter the final week of the regular-season still able to earn a home playoff date in the Eastern Semi Final. At the time of writing he has split reps at practice with Evans, who is a raging bull, healthy, ready and begging to be released for the stretch run.

Whose time is it? We’ll all have to wait and see for now, but whoever the Ticats choose needs to be the right answer before time runs out on the Ticats pressure-packed 2021 season.