Those who don’t learn from history are bound to repeat it, but sometimes history is worth trying to replicate. That had to be at the core of Montreal Alouettes GM Danny Maciocia’s decision making process as completed a trade to acquire quarterback Trevor Harris on Sunday.

With five weeks left in the regular season, the deal comes a few weeks ahead of when the Winnipeg Blue Bombers landed Zach Collaros in 2019, but the similarities are staggering.

At the time Collaros was acquired, Winnipeg lost their opening day starter to injury just as Montreal has now. A reminder of Matt Nichols’ Winnipeg-winning percentage came about this week when the CFL on TSN put up a stat on the Montreal-Ottawa broadcast showing Alouettes quarterback winning percentages since Anthony Calvillo’s final game.

Both teams have an established running game with a powerful back – or two in Montreal following the emergence of Cameron Artis-Payne – capable of controlling the time of possession to supplement effective quarterback play.

Both teams are lingering in the mid-pack of their divisional playoff picture, with anything possible heading down the stretch.

Both teams have an unproven backup quarterback, although Matthew Shiltz has shown more in the passing game than Bombers backup Chris Streveler ever did, a note that has to be weighted heavily with the context of Streveler’s unique skill set in the running game which served a crucial purpose in the Bombers 2019 Grey Cup run.

The secret sauce to unlock Winnipeg’s Grey Cup potential in 2019 was adding a veteran passer in Collaros who could operate the run-based offence at a high level, make checks at the line of scrimmage while trusting his experienced eyes and converting a higher percentage of second down ‘passing downs.’

So, Harris comes in, steals the starting role immediately from Shiltz and the Alouettes are set to romp through Toronto, Hamilton and – likely – Winnipeg on their way to the 2021 Grey Cup?

Never say never, but this is where the biggest question mark exists for me: Style.

When Collaros came to Winnipeg the system fit him perfectly. The approach of Paul LaPolice, and now Buck Pierce, as offensive coordinators accessed the best parts of Collaros’ skillset without asking their backfield saviour to overextend himself.

In Montreal, the approach has consistently been to let it fly anytime the opportunity presented itself. Vernon Adams Jr.’s pairing with head coach Khari Jones was arguably as much a match made in heaven as Collaros with the Bombers coaching staff, but what about Harris?

Based on what we’ve seen of Harris’ play in recent seasons, he can best be characterized as an effective short and intermediate thrower who uses his quick release and decision making to pick defences apart. Harris is one of the few CFL quarterbacks patient enough to take check downs and throws short of the sticks all game if that’s what the defence is giving him.

How will that mesh with Khari Jones’ aerial attack? Your guess is as good as mine at this point, but for this to work there has to be a style fusion somewhere in the middle. It can’t be 80-20 Montreal bombs away bonanza or 70-30 Harris cautious, calculated dinks and dunks.

Somewhere between those two approaches lies a real opportunity for the Alouettes to find the sweet spot of maximizing both approaches, but it will take lack of ego and willingness to involve in short order from both parties.

One reason I believe this is possible comes from a Zoom chat I recently had with Khari Jones in preparation for Week 9 Montreal vs. Toronto.

I asked about trying to get his then fully healthy quarterback Adams Jr. to make the simple throws with accuracy while not restricting his natural playmaking ability or downfield aggression through play calling. The response was telling with Harris now acquired.

“I want Vernon to understand he doesn’t always have to make the big throw, sometimes it’s okay to take the check down or have to punt in order to avoid a costly mistake,” said Jones. “You never want to limit his ability to make plays but it’s definitely something we’ve been working towards is finding that understanding and maturity.”

Harris brings that calming nature, that veteran depth of knowledge and perhaps even a comfort level of playing in the East Division. 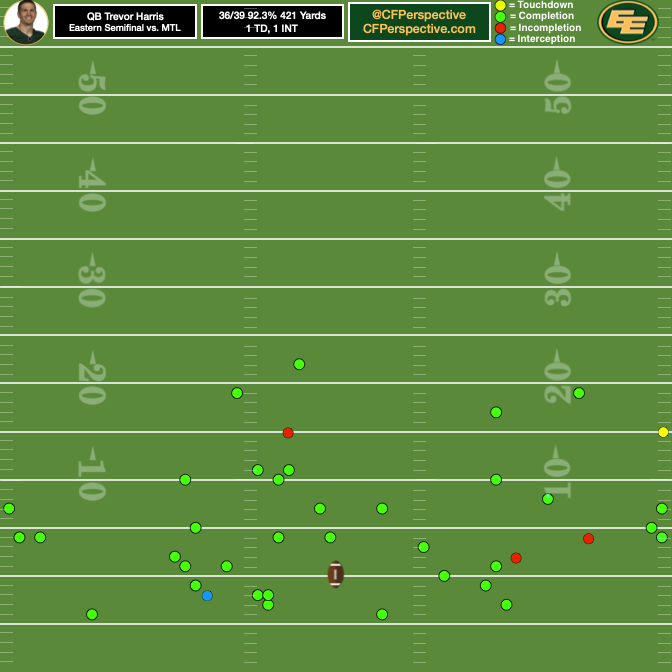 The last time he took the field in Montreal was a performance for the ages, if he brings anything close to that 2019 Eastern Semi-Final, the Alouettes could be on the path to repeating recent CFL history.