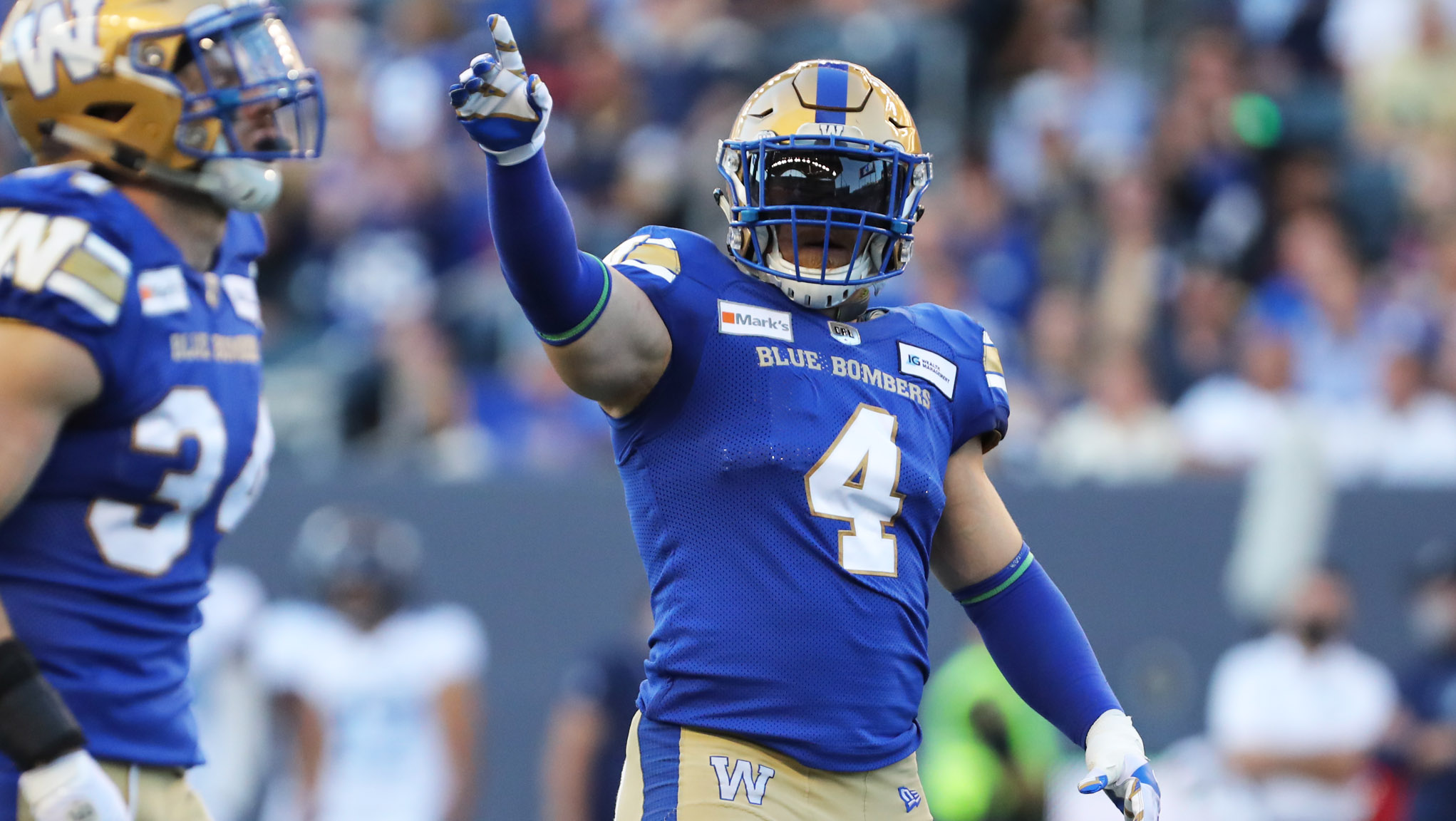 The Winnipeg Blue Bombers have been overwhelming in 2021.

They haven’t been perfect; there have been interceptions, fumbles, missed kicks and penalties but the sum of their parts has been special as they attempt to win back-to-back Grey Cups spanning the void that was 2020.

So what is the rest of the CFL to do about these Bombers? Shut it down, go home and start planning for 2022 kickoff next May?

Despite Winnipeg taking everyone’s best shot and persevering weekly, teams have no choice but to keep trying to crack the Bombers code knowing that all it takes is four good quarters of playoff football and the Bombers can be eliminated.

In an effort to see what might be possible IF Winnipeg doesn’t win the final game of the season, I looked back at their only loss thus far, Week 3 in Toronto, to gain an understanding of what the Argos did well enough to win 30-23, and whether other teams can replicate it.

How did Toronto control the ball in such overwhelming fashion? Effective ground gains on first down and preventing second down conversions for the Bombers offence.

Week 3 was the coming out party for Toronto running back D.J. Foster, who worked in a tandem backfield with John White to gain 6.2 yards per carry on first downs, Winnipeg’s second-worst performance in the category behind only Week 2, also against the Argos (9.3 yards per carry).

Meanwhile, the Bombers offence converted just 33% (6/18) of their second downs which was bested by only the Week 2 matchup against Toronto (29% conversion rate). All of this while holding then starting running back Brady Oliveira to just 3.2 yards per carry on first down with only Week 2 against Toronto going lower (2.8 yards per carry).

So how did Toronto lose Week 2 against Winnipeg if all these important measurables were actually superior to their winning effort? Quarterback play.

In Week 2, Toronto got a lacklustre start from McLeod Bethel-Thompson who completed less than 50% of his passes for under 100 yards on 20 attempts before being replaced by Nick Arbuckle. In Week 3, Arbuckle completed 72% of his pass attempts for over 300 yards.

By effectively throwing the football and controlling the clock, Winnipeg had their winning formula disrupted and began to chase as quarterback Zach Collaros had a season-high 33 attempts, matched only by his sparkling 417 yard performance against BC in Week 9.

Despite throwing it more, the Bombers downfield aggression actually dropped off (7.57 yards in air per attempt) compared to their eight wins (10.36 yards in air per attempts). Offensive coordinator Buck Pierce called 83.7% pass plays in Week 3, when combined with the poor second down conversion rate above, you get just four second down rush attempts from a Winnipeg club that loves to be equal parts run and pass threat regardless of down, distance, field position or score differential.

What does it all mean?

In order to beat the 2021 Winnipeg Blue Bombers it appears you need to win the turnover battle, play them back-to-back to gain valuable intel from game one, hope their kicking game continues to struggle, create chunk plays and consistent first down rushing gains offensively, get rush stops on first down and make great plays in the secondary when challenged with conversion attempt passes.

Sounds simple enough, right? It might not take all of that, the formula could be completely different and Winnipeg could just choke away a playoff game with a couple big scoring plays given up and an off day offensively, but I wouldn’t bet on it.

To take down the defending champions will take a complete team effort with great line play, above average quarterbacking and maybe, just maybe, a hint or two of luck. Think your team has what it takes?