When Michael ‘Pinball’ Clemons and John Murphy began attacking their 2021 roster construction, all the buzz was about the front seven on defence, and rightfully so.

There were Canadian stars in Cameron Judge and Henoc Muamba added alongside big name NCAA products Shawn Oakman and Shane Ray. Add in a former Super Bowl champion like Kony Ealy and a plethora of established CFL names such as Cordarro Law and some guy named Charleston Hughes who is only the most consistently dominant pass rusher of the past decade.

Meanwhile, the receiver room was taking shape with a distinctly Calgary Stampeders alumni flavour. Eric Rogers, DaVaris Daniels and Juwan Brescacin collected a total of 434 passes for over 5,000 yards and 53 touchdowns together in Calgary, a level of production clearly understood by former Stamps coach Ryan Dinwiddie when taking the Toronto job and pursuing all three.

Add into the fold Ricky Collins Jr. after being let go from Edmonton following a 1,000-yard season and journeyman Daniel Braverman and you have yourself the looks of a highly competent pass catching group.

The purpose of this piece is not to convince you for or against Toronto’s receiving talent, rather to understand how they are being used and what shape the group has taken on through a 2-1 start to the 2021 CFL season.

Let’s begin with a look at where the top four Argos receivers (minimum 10 targets) are being located in the offence. 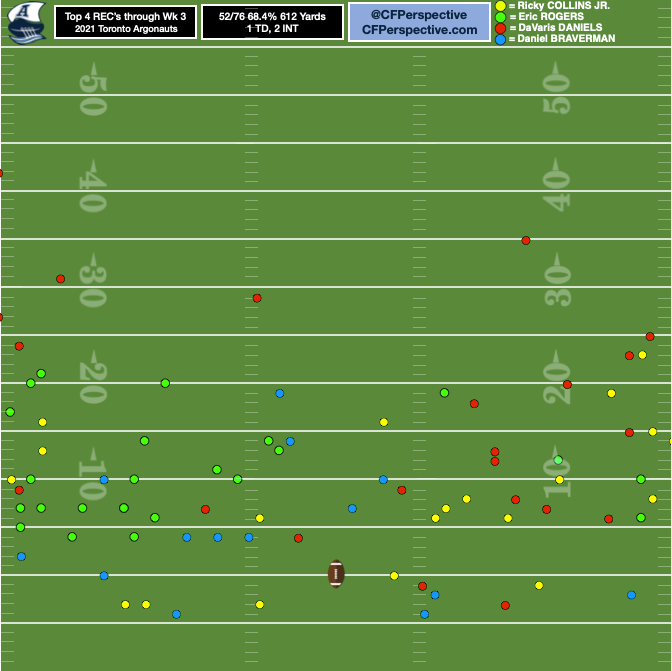 At a base level, Braverman is the underneath, crosser and middle field curl receiver, Collins is heavily targeted in the quick game (screens, slants etc.) and Daniels is most likely to stretch the field vertically.

I know this might be tough to read into, especially if you’re new to some of my target graphics, but Eric Rogers‘ target tendency was simply stunning when I put the chart together. Let me help by isolating his throws alone. 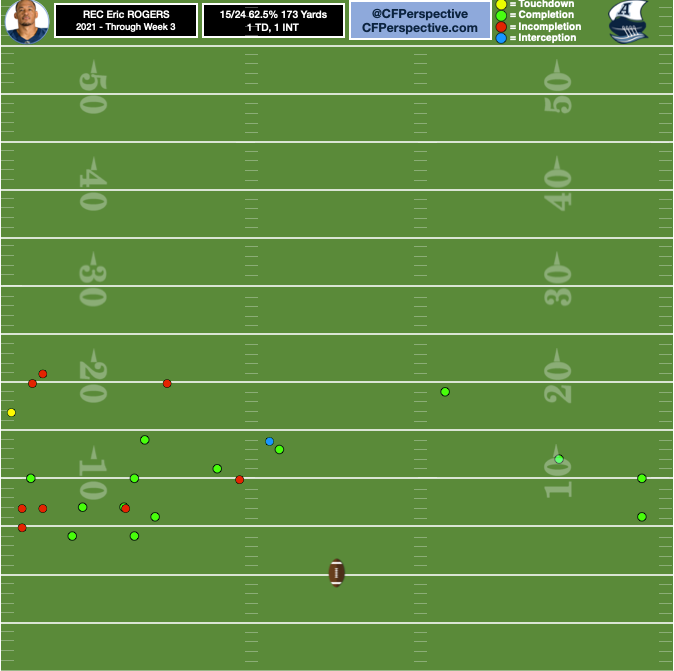 Anyone see that coming? Me neither. In the strongest tendency of all thus far in Toronto’s offence, Rogers has seen 75 per cent of his targets come under 20 yards downfield and to the left, while every throw to the right has been completed. A game breaking tendency likely to hamper the Argos passing game once realized by teams? No, but an interesting trend to note as we learn how these receivers are being used.

Here are Toronto’s top four on first and second down with Yards in Air (YIA) and Yards after catch (YAC) splits.

I can’t decide what my favourite number is here. Between Collins averaging 15.7 yards after catch on first down and Daniels averaging 22.0 air yards per target on second down, there are clearly some strong stylistic preferences being developed.

Just how crazy is that Collins yards after catch number? Powered by an eye-opening screen on the first play of the third quarter in Calgary and a late game catch-and-run in Week 3 against Winnipeg, Collins has collected 69 per cent of his yards in 2021 after catching the ball. A stunning stat compared to his teammates Braverman (40 per cent), Rogers (21 per cent) and Daniels (14 per cent).

To get a sense for where Toronto’s top four land in the grand CFL landscape I took a look at usage vs. production for all eligible CFL receivers (minimum 10 per cent of team targets). 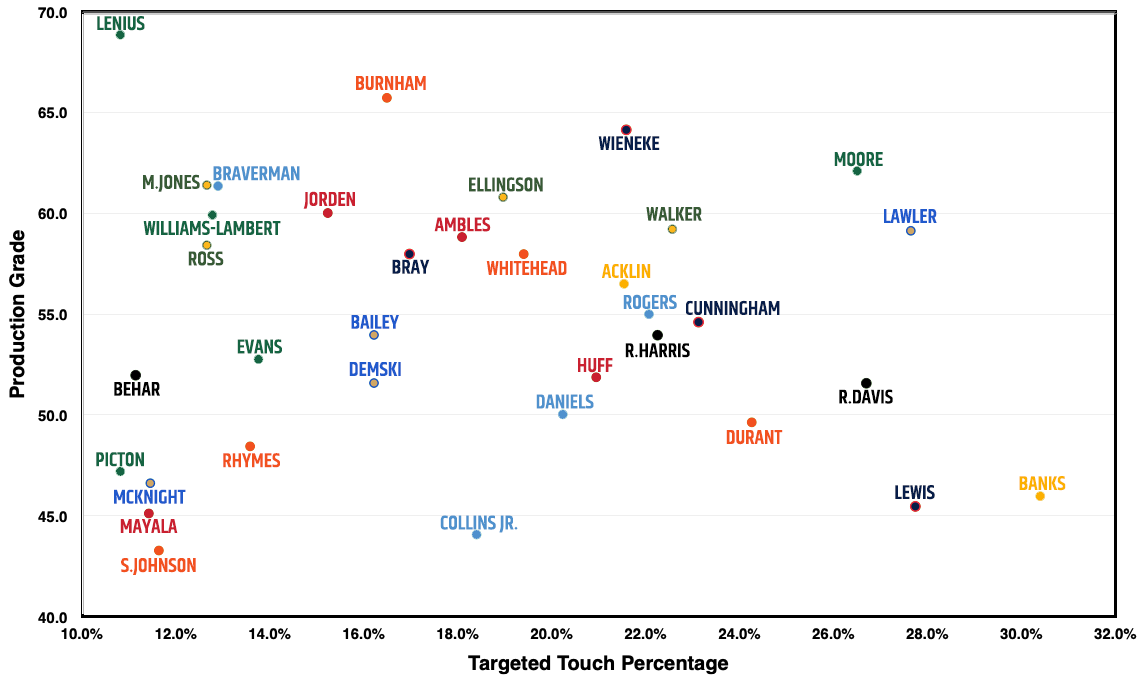 Across the CFL landscape, Kyran Moore and Kenny Lawler are the class of the league, Bryan Burnham is playing out of this world and needs more targets, while Brandon Banks has struggled despite a high volume of targets.

As for the Argos, no one receiver is jumping off the page here. Perhaps Braverman’s production grade shows he — like Brayden Lenius, Mike Jones and Kamar Jorden — deserve more looks. Maybe Collins’ targets could be more efficient to help him create more consistency in the Rogers realm of productivity, but in all the Argos are a well-rounded receiving group with plenty of targets and depth that are making it increasingly difficult to stop their passing attack.

Add in John White and D.J. Foster rushing for over 100-yards in back-to-back games, a big leg kicker in Boris Bede and that defensive front and you quickly realize that the Argos just might have a shot at this thing come December in Hamilton.