There was a classic Shakespearian nature to Sunday’s Grey Cup in Hamilton.

You don’t have to be a fan of classic literature to understand that fighter jets flying over the roar of applause and neon lights flashing brightly through the December night sky don’t exactly fit the time period of Ol’ Bill’s work, but let me explain what does.

In Zach Collaros, we had the classic antihero, a conquering voyageur whose story is full of ups, downs, triumphs and defeats. From the quiet understudy in Toronto to leading man in Hamilton, Collaros became more and more prominent in the CFL storyline over the last decade, climaxing at his presumed crowning as Most Outstanding Player for a 2015 season for the record books until mysterious fate assigned him one of the cruelest season ending injuries with a torn ACL.

The rehab story was told, just another battle for the prince of perseverance. Returning to assume his Black and Gold throne in 2016 ended with a home playoff defeat, then came rock bottom.

Hamilton started 0-8 in 2017 and Collaros was visibly frustrated with coaching decisions, receiver chemistry and the inability to reclaim the glory he experienced in front of the adoring Hamilton faithful weekly before his knee failed him years earlier.

He was traded away from Hamilton, a clear sign that the Ticats at best no longer needed his services and at worst lost faith he’d ever reach elite quarterback status again.

A standout 2018 season in prairie green showed signs that Collaros might be the answer to so many Saskatchewan prayers, but those hopes were dashed by the Stampeders kingdom, a relentlessly dominant force lingering in the shadows close behind any West Division teams’ hope for decades.

Then came 2019. Four snaps into the season, in front of the fans who claimed him as their own once upon a time, Collaros received a vicious shot from former teammate Simoni Lawrence. He left the field spraying obscenities in frustration for what appeared to be a season-ending play.

Traded to Toronto then flipped to Winnipeg, Collaros rose from the ashes as saviour of the Bombers’ passing attack. He not only salvaged the season; Collaros vanquished the Stampeders — on the road no less — en route to delivering Winnipeg its first crown in decades.

The low key king was atop the CFL game again and rewarded mightily with a contract extension that nullified the need for Matt Nichols‘ presence in the building.

A COVID cancelled season later, Collaros returned with intentions of a repeat. This time he was living day-to-day, appreciating the little things in life with family and the security that comes with being an unquestioned starting quarterback in professional football for the first time in years.

His hair was long, his game was refined and his production was unmatched. From Day 1, Collaros had the look of an MOP and the voters agreed overwhelmingly as he was recognized for the elite play so many doubted we’d see again.

All of which led Zach and his Bombers’ attack to where else, but Hamilton.

For the CFL’s Most Outstanding Player to deliver an iconic second championship in Bombers blue, an unparalleled thank you to the team who took a chance on the player once deemed damaged goods he would have to go through the team that let him go, at their home and in front of their fans.

The 108th Grey Cup began tentatively, Hamilton’s defence learning from their faults in stopping Andrew Harris and the Winnipeg ground game while Collaros struggled to find his balance of playmaker and facilitator. As the Bombers’ leading man fought through the first three quarters, he trailed in expectation and score. 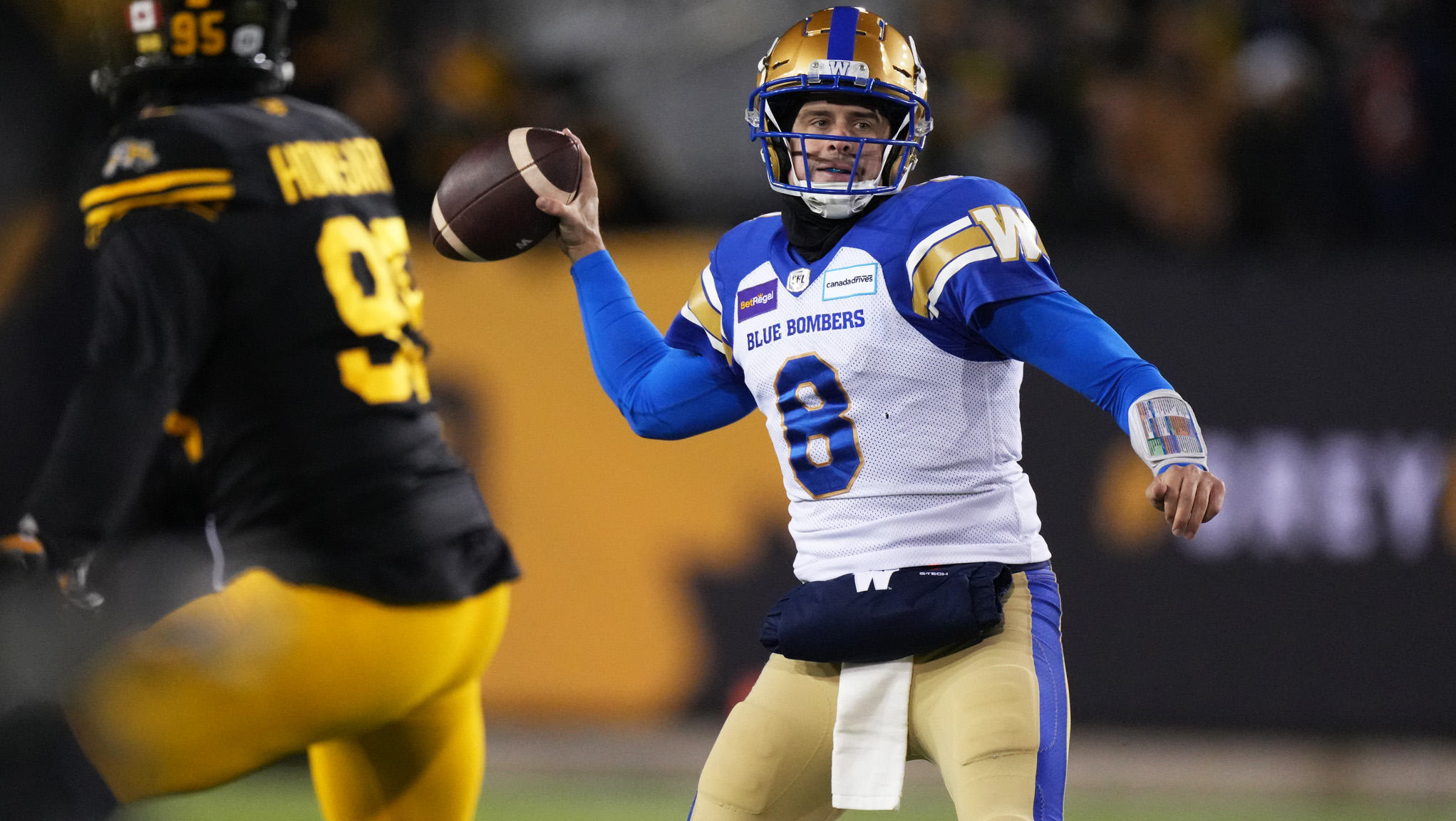 Collaros put a quiet night and a shaky third quarter to the side as he took over in the fourth and in OT to lead the Bombers to back-to-back Grey Cup wins (Geoff Robins/CFL.ca)

At 12-19 (63.1 per cent) for 121 yards, no touchdowns and two interceptions, Collaros was off his usual glistening stat line, but the CFL’s leading man in 2021 was just thickening the plot for his inevitable late game climb once again to the height of Canadian football.

In the fourth quarter and overtime Sunday, Collaros was 9-13 (69.2 per cent) for 119 yards, two touchdowns and no interceptions. He showed his worth, led those around him and threw Winnipeg back into contention, all as fate would have it, against Jeremiah Masoli the quarterback who replaced him in Hamilton three years earlier. The sort of symbolism that carries weight few outside Collaros’ ears would fully understand.

Collaros came to Hamilton, conquered his old stomping grounds and did it all with a trademark wry smile that has always given off a hint of ‘you have no idea what I’m truly capable of.’

Now we do. Everyone knows what Collaros can do, as he’ll forever be remembered in Bombers’ lore amongst the greats. A reality the traded around, beat down, afterthought of a quarterback savoured when asked about accomplishing the improbable in Hamilton.

“I’d lie to you if I didn’t say it was special, the past is the past but as a player you’re always going to have that chip on your shoulder,” he said.

It’s the final triumphant scene in every great movie and the final chapter in every page turning classic but make no mistake, Collaros’ story is far from dry ink as he re-writes what’s possible with each step in an unforgettable CFL career.